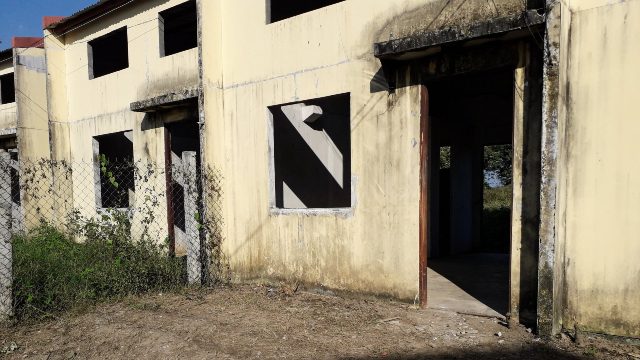 BATANGAS, Philippines – The government is eyeing two locations in Ibaan town as temporary shelters  for Batangas residents displaced by the Taal Volcano eruption.

The compound is part of a housing project intended for the military and police, but several houses remained unoccupied, partly because of its small size of about 22 square meters.

Most houses are still visibly unkempt, without doors and windows. The Batangas Provincial Disaster Risk Reduction and Management Office has already started cleaning some of the houses not claimed by cops or soldiers.

The local government is working on installing light fixtures and toilet seats in the units, and connecting them to water and electricity.

According to housing czar Eduardo del Rosario, displaced residents will be given the option to temporarily or permanently stay in these houses. (READ: Taal Volcano’s 2020 eruption: What we know so far)

Apart from the housing project, the drug rehabilitation center being constructed in Barangay Malainin in Ibaan is being considered as well, according to Batangas Vice Governor Mark Leviste.

The Batangas government also eyes the rehabilitation center in Barangay Malainin in Ibaan as temporary shelter for evacuees. The project is still ongoing construction but the buildings are already finished. | via @reyaikapic.twitter.com/3eIRNu0aRp

The drug rehabilitation center is nearly finished, with its buildings already completed.

Residents whose houses are located on Volcano Island, which is considered a permanent danger zone, as well as those whose houses were damaged by earthquakes and fissures in affected areas will be prioritized for relocation to the temporary shelters.

The restive Taal Volcano started erupting on January 12 and had been on Alert Level 4 for almost two weeks. On Sunday morning, January 26, the volcano was downgraded to Alert Level 3, meaning there is now a “decreased tendency towards hazardous eruption.” – Rappler.com