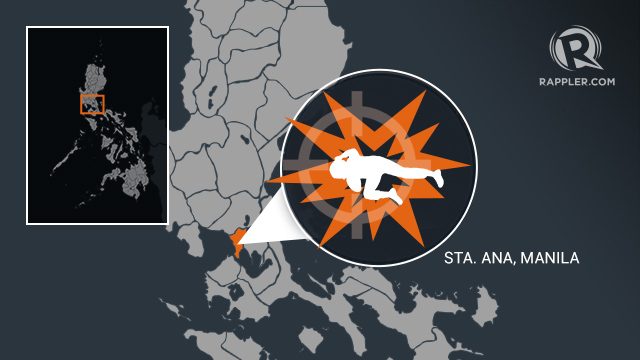 MANILA, Philippines – Four suspects onboard two motorcycles rode up to a group of men chatting in the middle of a busy street in Manila and aimed multiple gunshots at one of them, but ended up killing an 8-year-old boy standing on the opposite curbside.

The Manila Police District’s Sta Ana Police Station said in a spot report that Barangay Councilor Roberto Cudal, 52, was hanging out with barangay tanod (patrols) Lino Arojado and Dilig Pamogas, and a certain Romeo Nicolas, on the center island of Onyx Street in Barangay 775, Sta Ana district, at 4:45 pm on Monday, January 27, when the assailants turned up from the direction of Zobel Roxas Street and drove toward Cudal and his companions.

The motorcycles pulled up in front of the group and two of the suspects aimed pistols at Cudal and started shooting successively, then immediately rode off in the direction of Augusto Francisco Street.

Police said Cudal sustained several gunshot wounds while Nicolas who was seated beside him got hit in the pelvic area.

Eight-year-old Ronjhay Furio, who was standing across the street, was hit in the middle of the chest. He was rushed to the Ospital ng Maynila but was declared dead on arrival.

Cudal and Nicolas were brought to the Sta Ana Hospital.

Police have yet to identify the suspects. No motive was mentioned in the spot report.

Children and minors have occasionally fallen victim to stray bullets in shooting incidents, at times even during police operations in the government’s “war on drugs.”

The Duterte administration pins criminality on the proliferation of illegal drugs, particularly the ubiquitous crystal meth or shabu. The government claims a marked decline in crime since the drug war began in mid-2016. – Rappler.com