Jan 30, 2020 8:28 PM PHT
Sofia Virtudes
Facebook Twitter Copy URL
Copied
One netizen points out how China would have issued a travel ban to the Philippines had it been the other way around 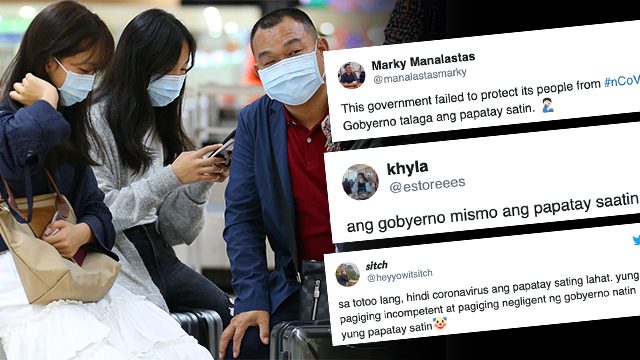 On Thursday, January 30, Filipinos expressed their dismay over the Philippine government’s refusal to ban travels to and from mainland China. This, after the Department of Health (DOH) confirmed the Philippines’ first case of the 2019 novel coronavirus (2019-nCoV).

During the House of Representatives’ question hour on Wednesday, January 29, Health Secretary Francisco Duque III explained that the government is not yet considering imposing a travel ban on tourists coming from mainland China because “confirmed cases are not limited to China.”

“If we do this, then the concerned country – China in this case – might question why we’re not doing the same for all other countries that have reported cases of the new coronavirus. It’s very tricky… but we commit to take this into consideration,” Duque said.

Netizens slammed the decision, saying that the government’s actions – or the lack of which – would kill Filipinos faster than the virus could.

Some criticized President Rodrigo Duterte for still paying more attention to the drug war in the middle of the looming nCoV crisis.

Filipinos: Ban all flights from China as a precautionary measure amidst the nCoV outbreak!

Fipilinos: But the PH is unprepared and unequipped and a case of nCoV in the PH would b—

One netizen also pointed out how China would have issued a travel ban to the Philippines had it been the other way around.

China would surely ban Filipinos from entering into their territory if nCov originated from the PH. Just a thought.

Local celebrities also took to social media to speak up about the issue. On Twitter, actress Solenn Heussaff wrote, ”Why is our government still allowing flights in from China? That should have been the first action when news about this virus came out.”

Why is our government still allowing flights in from China?? That should have been the first action when news about this virus came out.

Amid DOH’s confirmation of the first case of the novel coronavirus in the Philippines, many netizens were insistent that the government issue a Philippines-China travel ban immediately.

now that ncov has finally been confirmed to reach the philippines, can the president now please resolve to ban entries from china! prevention is always better than cure especially now that we literally do not have a cure

One tweet, which urged netizens to retweet if they agree with a China-wide travel ban, was already retweeted over 11,000 times as of writing.

RETWEET IF YOU WANT A CHINA-WIDE TRAVEL BAN NOW.

Twitter user @renzrup pointed out, “If other countries can do it, why can’t we?”

Ban all flights. Forget about diplomacy and tourism. If other countries can do it, why can’t we? Hindi tayo evacuation center ng China. #nCoV

Russia announced on Thursday, January 30 (Manila time) that it would shut its border with China amid the coronavirus outbreak.

Here’s what others had to say on the matter:

Meanwhile, some senators supported the call to issue a temporary travel ban to China.

“There is no hint of racism or xenophobia in this policy. This is an assertion of the national wellbeing. And an acceptance of the fact that our defenses and capacity to respond to a health emergency is not that strong,” said Senate President Pro-Tempore Ralph Recto.

So far, the Philippines has only temporarily stopped issuing visas to travelers from Hubei province in China, whose capital city, Wuhan, is the origin of the 2019 coronavirus. – Rappler.com