Vitaliano Aguirre is now a judge! 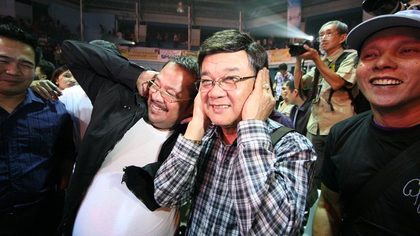 DAVAO CITY, Philippines – He was a judge. For one night at least.

Resigned private prosecutor Vitaliano Aguirre, who caught the ire of the impeachment court when he closed his ears while Sen Miriam Defensor-Santiago was speaking, arrived here Wednesday to be one of the judges of the city’s 2012 Mutya ng Dabaw.

It was no less than Mayor Sara Duterte who invited him.

“I realized that it is better to be a judge in a beauty contest than to be inside the impeachment court. Here, everything is fair. And no one will hurl profanities at you,” Aguirre told reporters.

It was his first time to judge a beauty contest.

“And to make things more exciting, my bet among the 5 finalists was the one who was crowned as the Mutya ng Dabaw,” Aguirre said.

Aguirre quit the prosecution panel before the impeachment court cited him in contempt for his acts that angered Santiago. He said sorry, but the court reprimanded him just the same.

He’s become a celebrity of sorts. Supporters have printed shirts showing his photo and declaring he’s their new hero. – Rappler.com