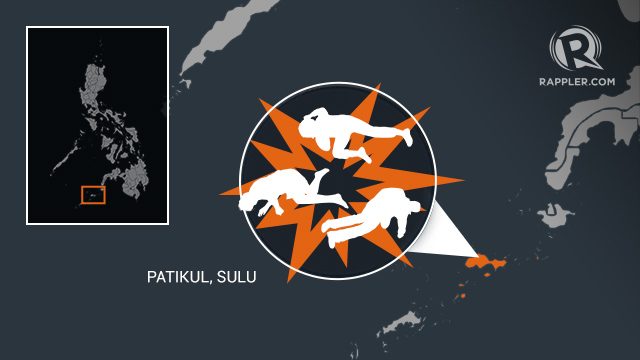 ZAMBOANGA CITY, Philippines – Three soldiers were killed in a shooting incident inside the Philippine Army headquarters in Patikul, Sulu, on Friday night, January 31.

Indap, in turn “was also killed by personnel within the camp premises to prevent more fatalities,” Zagala said.

He said that based on the initial investigation, Lamoste confronted Indap as the latter was found to be drunk while on duty, in violation of camp rules and regulations.

“An altercation ensued which then led to the fatal shooting, an unfortunate breach in military discipline which resulted to violence,” Zagala said.

“The Philippine Army symphatizes with the families of the victims and will extend the necessary assistance to them while police investigation is ongoing,” he added.

The shooting happened at the headquarters of the 9th Field Artillery Battalion, Army Artillery Regiment, at Barangay Liang in Patikul.

Sulu police said the 3 were brought to the Camp Bautista Station Hospital in Jolo, Sulu, but were pronounced dead on arrival. – With reports from Richard Falcatan and JC Gotinga/Rappler.com