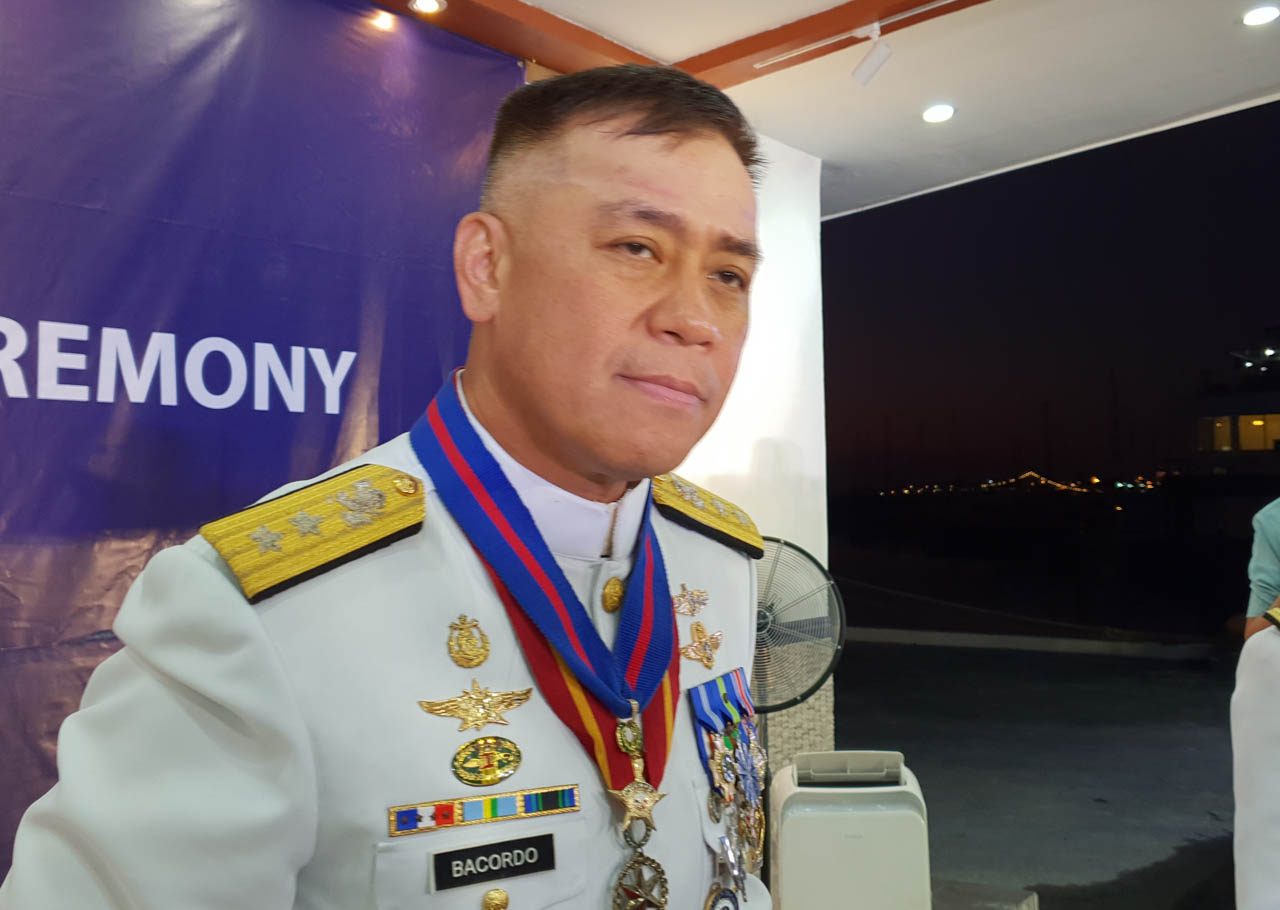 MANILA, Philippines – For the Philippine Navy’s new Flag Officer-in-Command, Rear Admiral Giovanni Carlo Bacordo, it’s out with the old, in with the new in all aspects of naval operations, from phasing out vintage vessels to upgrading the mindsets of sailors and marines.

Speaking as he assumed command of the 25,000-strong Navy on Monday, February 3, at their headquarters in Manila, Bacordo presented a detailed plan of how he intends to thoroughly modernize the service, now the focus of Horizon 2 of the Armed Forces of the Philippines’ (AFP) three-tiered, P300-billion Modernization Program.

Bacordo emphasized the need to train the Navy’s sailors and marines in thinking and operating in ways that maximize its new acquisitions, which would entail updating the Navy’s support infrastructure like shipyards and harbors, as well as its recruitment and training processes.

“It is easier to modernize the Navy in terms of modern platforms with modern weapons and sensors. But most challenging is to modernize the mindsets of the sailors and marines after decades of exposure to a legacy capability,” Bacordo said.

“Without a modern mindset, all of these modern assets of the Navy will go to waste,” he added.

At least 24 ships to be decommissioned

Sailors and marines will only backslide into the old ways if they keep working with “legacy” or outdated, dilapidated assets, Bacordo said.

That’s why the Navy will be decommissioning at least 24 of its vessels on a quarterly schedule until mid-2021, he told reporters after the change-of-command ceremony led by President Rodrigo Duterte.

Last week, the Navy decommissioned the legacy vessels BRP Rizal and BRP Nicolas Mahusay. The Rizal is a World War 2-era ship acquired from the US in 1965. The Nicolas Mahusay was transferred by South Korea to the Philippines in 1998.

Any weapon or system on decommissioned ships still in working order will be transferred to other ships. Their crew will be trained to operate newer vessels or be assigned to other tasks in naval operations.

“Our ships to be decommissioned have outlived their glory days. Ships designed for 24 knots now speeding at only 10 to 12 knots so can no longer fulfill their designed mission,” Bacordo said.

Although it appears the Navy is phasing out old ships faster than it is acquiring new ones, the capabilities of a few new vessels fitted with contemporary weaponry outclass the old ones put together, and make far better use for sailors and marines.

The Navy is set to receive two brand new modern frigates this year: the BRP Jose Rizal by May, and the BRP Antonio Luna by November.

Eight Fast Attack and Interdiction Craft-Missile (FAIC-M) vessels are on the way “hopefully by the first quarter of 2021,” Bacordo said. Four of the FAIC-Ms will be built in Israel, and the other 4 in the Navy’s local shipyard.

The tricky thing, Bacordo said, is that without a complete training and maintenance package for the Navy personnel who will work with the new vessels, they are unlikely to be maximized and will likely fall into disrepair in 5 to 10 years.

That’s why Bacordo said he would insist on a full “sustainment suite” to accompany the new assets. That includes materiel and facility requirements, like programs for drydocks, special tools, testing equipment, and warfighting simulators.

Bacordo plans a demand-driven “selective recruitment” of new sailors and marines with the educational background that suits the Navy’s current needs, such as graduates of engineering, electronics, and information technology courses.

The Navy will from here on “strictly observe the fields of specialization,” to produce sailors and marines with progressive career paths in warfare, support to warfare, and staff specializations, Bacordo said.

The problem, he added, is the present Navy mindset that only officers who have commanded vessels or Marine battalions can advance to flag rank, the equivalent of generals in the Army or Air Force.

The result was that the Navy “never developed a high proficiency in the support to warfare and staff specializations like personnel, plans, logistics, finance, cyber warfare, education, and training,” Bacordo said.

This means rewiring a longstanding culture in the Navy, and its new chief promised to deliver on these goals by the time he steps down in June 2021, when he reaches 56, the mandatory age of retirement in the military.

Being an archipelago, the Philippines requires a credible naval force, and the outgoing Flag Officer-in-Command, Vice Admiral Robert Empedrad, earlier admitted that the Philippine Navy has quite a long way to go before it catches up with the navies of other Southeast Asian countries.

As Chinese vessels – military or otherwise – keep patrolling and even occupying parts of the West Philippine Sea, Bacordo is faced with the challenge of securing the country’s maritime borders without provoking a violent response from intrusive China, and come limping back to port because of the opponent’s superior naval might.

China in the West Philippine Sea and foreign extremists sneaking in through Sulu Sea are the Navy’s main external security concerns.

The AFP envisions “a modern, multi-capable naval force responsive to our maritime nation’s defense and development” by 2028 – and a new sail plan is expected to be launched as Bacordo takes the helm.

“Everything has to be modernized,” Bacordo addressed the naval staff gathered for his assumption of command. Ultimately, “it is not the modern ships, tanks, and aircraft that will bring the Philippine Navy to the modern era,” but its personnel “armed with modern mindsets,” he added. – Rappler.com