The First Quarter Storm of 1970 revisited MANILA, Philippines – Fifty years ago, they marched in rage in the first months of 1970 to protest the abuses of the Marcos dictatorship – a tumultuous period that has since been called the First Quarter Storm (FQS). On Friday, January 31, they met again, this time no longer as student activists but as FQS veterans still dreaming of a better nation.

The FQS reunion was held in a historic venue, the Club Filipino in San Juan, where Cory Aquino was sworn into office as president after the EDSA People Power revolt in February 1986. Those who came for the gathering were in their late ’60s and early ’70s, some perhaps even older – though once upon a time, with clenched fists and idealism, they tried to turn Philippine society upside down with the rallying cry of, “makibaka, huwag matakot!” (fight, be not afraid!).

Fifty years on, with little indication that radical change is about to take place and their dream of a just and equitable Philippine society remaining just that – a pipe dream – those who gathered for the reunion seemed just thankful that they had survived a long and arduous journey, because many others simply didn’t. (READ: Timeline: First Quarter Storm)

“Walang pulitika” (No politics) was what reunion organizer Fluellen Ortigas, a former spokesman of the militant Kabataang Makabayan, promised in his Facebook Messenger invite.

This was a veiled reference to the split in the ranks of the national democratic movement in late 1980s and early 1990s, leading comrades-in-arms  to choose sides between the so-called Reaffirmists, or those who stood by the old precepts and the strategies and tactics that had worked in the past, and the Rejectionists, who wanted to chart a different direction for the revolutionary movement.

The “no-politics” directive was duly noted, and from all indications, diligently observed.

The reunion gathered not just the natdems, or the leaders and members of KM and its allied organization, the Samahang  Demokratiko ng Kabataan (SDK), but also a handful of “moderates” or social democrats and even those that the natdems derisively called “revisionists,” or those who adhered to the Soviet line in the ideological debate instead of Mao’s teachings on “people’s war.”

The 3 main players in the movement for change had in fact been united in the lead-up to the FQS and even in the January 1970 demonstrations. But relations grew increasingly acrimonious as differences in ideology got in the way of friendships.

For this reunion, old friendships were rekindled, new ones started, with smiles and polite acknowledgment of everyone who was there regardless of past and present political persuasion.

Easily a highlight of the reunion was the presence of 3 leaders of the FQS who had to stay longer in China after the suspension of the writ of habeas corpus following the Plaza Miranda bombing of the Liberal Party in August 1971. They had standing warrants of arrest for alleged subversive activities.

We managed to hear only the latter half of their performance as we were busy lining up to partake of the merienda prepared  by our genial host, former Malabon Mayor Len Oreta Jr. (husband of Ninoy Aquino’s sister Tessie), who was clamped in prison twice by Marcos for alleged gunrunning for Ninoy. 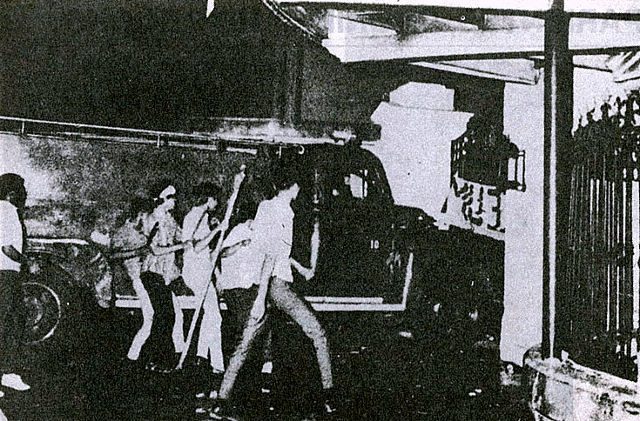 Other prominent activists in the reunion were Rafael Baylosis of the SDK, an honor graduate of UP in 1970 who went underground and had been arrested a number of times, most recently after the collapse of the peace talks between the government and the National Democratic Front (NDF), as well as former SDK spokesman Gary Olivar, who was arrested in 1971 shortly after the writ suspension and now writes a column for a daily broadsheet. He is an economist and is active in the banking and finance sector.

Fernando Tayag, a leading figure in the underground in the early 70s, also came. He is the brother of Nilo Tayag, the former KM national chairman who spent at least 10 years in prison since his arrest in 1970 more and has since become a bishop of the Aglipayan Church, now renamed as Iglesia Filipina Independiente (IFI).

Etta Rosales, former ACT Party-List Representative and ex-chairperson of the Commission on Human Rights, arrived at the gathering and immediately engaged in animated conversation with former UP President Francisco “Dodong” Nemenzo, wife Princess, and his sister Gemma, now editor of a US-based online publication dealing with Fil-American issues. Dodong and Princess were colleagues of communist party founder Jose Ma. Sison in the early ’60s when the KM was established, but broke away to establish the Bertrand Russell Peace Foundation.

KM stalwarts at the reunion included Luzvimindo David, secretary-general of the militant group in the early ’70s before his arrest and detention for many years at Fort Bonifacio. Another KM leader was Ric Reyes, who is now helping Pasig City Mayor Vico Sotto in implementing a housing program for city residents.

Abrino Aydinan, who hails from Ifugao, also made it to the reunion despite difficulty walking from the effects of a debilitating stroke years back. He was among those we first met at the Youth  Rehabilitation Center in Fort Bonifacio when we were detained there for 18 months, from June 1973 to December 1974.

Linggoy Alcuaz, who was part of the social democratic movement during the FQS days, was there as well.

The reunion started at 3 pm amid much laughter and fond remembrance of the old days. If you were an outsider, you’d be hard-pressed to imagine these grizzled veterans were the same angry young men and women who 50 years ago laid siege on Malacañan Palace on the night of January 30, 1970 and kept the whole nation teetering on the edge of turmoil throughout the first 3 months of 1970.

As Philippine society stood on its head, they reasoned then, it needed to be turned upside down. Armed with nothing more than angry slogans and sticks and stones – and an occasional pillbox or two , an improvised explosive device meant more as a political statement than a serious intent to maim or kill – those who manned the barricades during the FQS would undergo a baptism of fire that would change their lives forever.

For this particular commemoration of the tumultuous period known as the FQS, we may have gone our separate ways since those heady days. But surviving Martial Law, years spent in prison or constantly on the run to escape arrest were valid enough reasons to reminisce about the past.

By sharing stories and lessons learned from the struggle for real change with the younger generation, we might be able to help build  a better future for the nation, not necessarily through social upheaval as we once thought, but perhaps by tackling one issue at a time.  – Rappler.com