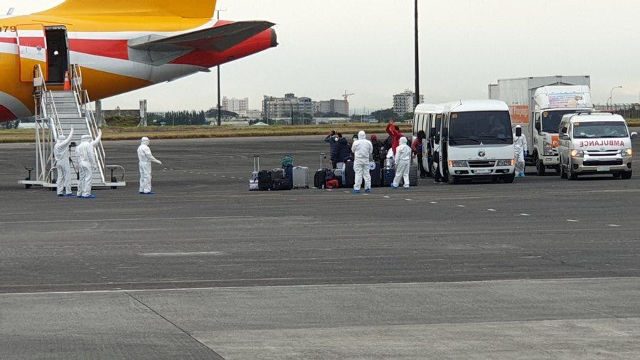 MANILA, Philippines (5th UPDATE) Thirty Filipinos returned from China’s Hubei province, the epicenter of an outbreak of the deadly novel coronavirus (2019-nCoV), are now back in the Philippines on Sunday morning, February 9.

In a press statement, the Department of Foreign Affairs (DFA) said the repatriated Filipinos on the chartered flight which “landed at the Haribon Hangar in Clark Air Base included 29 adults and one infant.”

Also quarantined are two individuals from the Philippine consulate in China who handled the repatriates’ documents, said the Department of Health (DOH).

The DFA called for the repatriation of Filipinos in China on January 28.

However, only 30 returned to the Philippines, from the earlier announced 56, because of some circumstances on the ground.

One family, said the DFA, “had a change of heart.” Some Filipinos there also cited the government’s travel restrictions on flying back to China as their reason for staying behind, added the DFA.

Asked if there would be a 2nd batch of repatriates, the DFA said it depends on the demand. “Also, please be reminded that the repatriation was organized mainly for the Filipinos and their families in Wuhan or Hubei because of the existing lockdown where they couldn’t move even if they wanted to.”

In a separate statement, the DOH explained that the repatriates underwent 3 levels of screening before they were able to fly back home:

Officials from the DFA and the DOH earlier said the 30 would be brought to the New Clark City Athletes’ Village and will be quarantined for 14 days, alongside the team assigned to repatriate them.

Health Undersecretary Gerardo Bayugo said in a briefing on Sunday afternoon that “no contamination” happened and no one showed symptoms at the airport.

“So all the people who were repatriated are now safe and resting in the quarantine facilities in New Clark City,” he said.

The DOH Central Luzon Center for Health Development has declared code blue for hospitals and health facilities in the region to immediately address medical needs of the repatriated Filipinos.

“If an individual, during his or her stay in the quarantine facility, suddenly shows signs and symptoms, the DOH had deployed medical teams to immediately assess and facilitate transfer to [a] hospital for close monitoring,” added the DOH.

How the quarantine will work

Upon landing, the repatriates disembarked at the hangar, and not the passenger area, of the Clark International Airport. They will be transferred directly to the quarantine facilities at the Athletes’ Village.

There, they will each be given their own room. Medical staff will be on hand round the clock to monitor their health. Support staff will mostly be working in a separate building from the repatriates in quarantine.

The repatriates will be allowed to use mobile phones mainly to stay in touch with their families and relatives. The facility will have Wi-Fi.

The team of government representatives left Clark at 10:15 pm on Saturday, February 8, on a chartered flight from the Royal Air Charter Service, arriving in Wuhan Tianhe International Airport early morning on February 9.

In a statement on Sunday, Presidential Spokesperson Salvador Panelo said the safety of Filipinos here and abroad “continues to be the paramount concern” of the government.

“Let us pray for our fellow countrymen, as well as [for] the members of the repatriation team…that they do not show any symptom of having caught the virus,” he added. – with reports from Janella Paris and Sofia Tomacruz/Rappler.com