Feb 10, 2020 4:39 PM PHT
Janella Paris
Facebook Twitter Copy URL
Copied
The patient, a 38-year-old woman who had traveled from Wuhan, China, has been discharged from the hospital 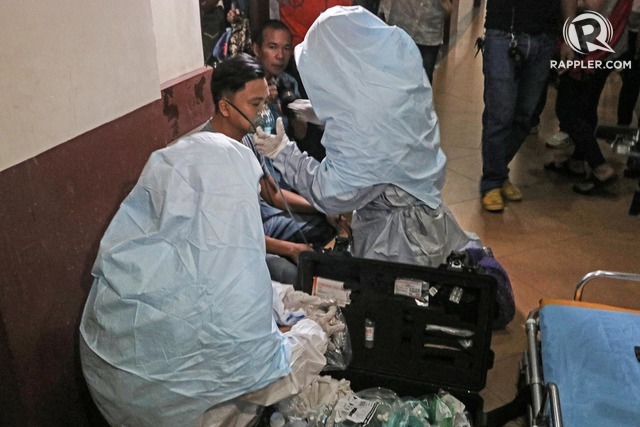 MANILA, Philippines – The first patient confirmed to have the 2019 novel coronavirus (2019-nCoV) in the Philippines has recovered from the infection, the Department of Health (DOH) confirmed on Monday, February 10.

Health Undersecretary Eric Domingo said that the 38-year-old woman from Wuhan, China, who was the Philippines’ first case of the novel coronavirus, has tested negative for the virus twice and “has in fact been discharged.”

Domingo could not confirm if the woman has already flown back to China since her release from the hospital on Saturday, February 8.

Before testing negative for the virus, the woman had already been recovering in San Lazaro Hospital and had not been showing symptoms.

The woman’s recovery from the disease means that there are currently no living patients with the virus in the Philippines.

The woman’s traveling companion, a 44-year-old man who also tested positive for the novel coronavirus, died of complications due to severe pneumonia.

The Philippines’ third confirmed case, a 60-year-old woman from China, also subsequently tested negative for the novel coronavirus after a few days in the hospital. She has since returned to China, according to the DOH.

The third case, Domingo had earlier said, was evidence that “the virus can be eliminated as immune system mounts response against it.”

But the DOH still urges the public to remain vigilant and practice precautionary measures, as the disease continues to claim lives in China.

As of Monday, the novel coronavirus has killed 910 and sickened over 40,500 globally, with China as the worst-hit country. But at least 3,400 have reportedly recovered.

As of Monday, the DOH has probed a total of 314 patients for possible novel coronavirus infection. A total of 261 patients under investigation are still admitted to hospitals, while 50 have been discharged.

Here is the breakdown of patients under investigation per region:

Only one person died due to the novel coronavirus in the Philippines, but it marked the first death due to the virus outside China. Two other patients under investigation, who both tested negative for the virus, died due to other illnesses,

The Philippine government has imposed a temporary travel ban to mainland China and the special administrative regions of Hong Kong and Macau in an effort to curb the spread of the virus.

Some 30 Filipinos from Hubei province, the epicenter of the outbreak, were also repatriated on Sunday, February 9, and are currently under quarantine in New Clark City in Capas, Tarlac. – Rappler.com