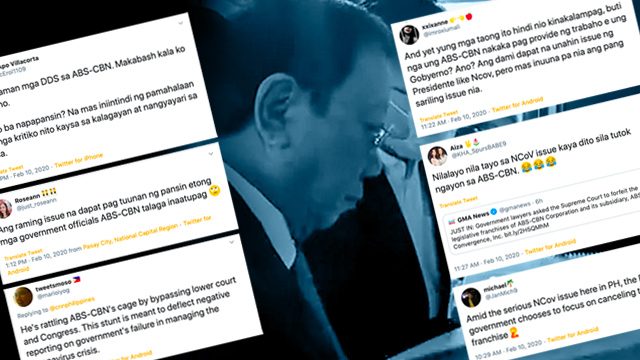 The petition asked the Supreme Court to nullify the franchises of ABS-CBN and ABS-CBN Convergence, Inc “as they are unlawfully practicing their legislative franchises.” The petition was based on accusations of foreign ownership. (TIMELINE: Duterte against ABS-CBN’s franchise renewal)

ABS-CBN’s franchise is set to expire on March 30, but with the filing of the quo warranto petition, 11,000 jobs at the network giant may be at risk.

Filipinos online were quick to slam not just Jose Calida, but the Duterte administration as well, saying that the petition was a diversionary tactic to redirect the conversation from other issues, from the Taal Volcano eruption to the government’s mismanagement of the 2019-novel coronavirus outbreak (2019-nCoV). (FAQ’s: Ano-ano ang alam natin tungkol sa 2019 novel coronavirus?)

As online users aired their thoughts on social media, the hashtag #NoToABSCBNShutDown quickly topped the local trends list on Twitter. (Haven’t you noticed? The government is more concerned about their critics than about the state of the country.)

Check this collection of tweets compiled by Rappler to see what other online users have to say about the quo warranto petition.

What do you think of the quo warranto petition filed by Calida against ABS-CBN? Let us know in the comments!