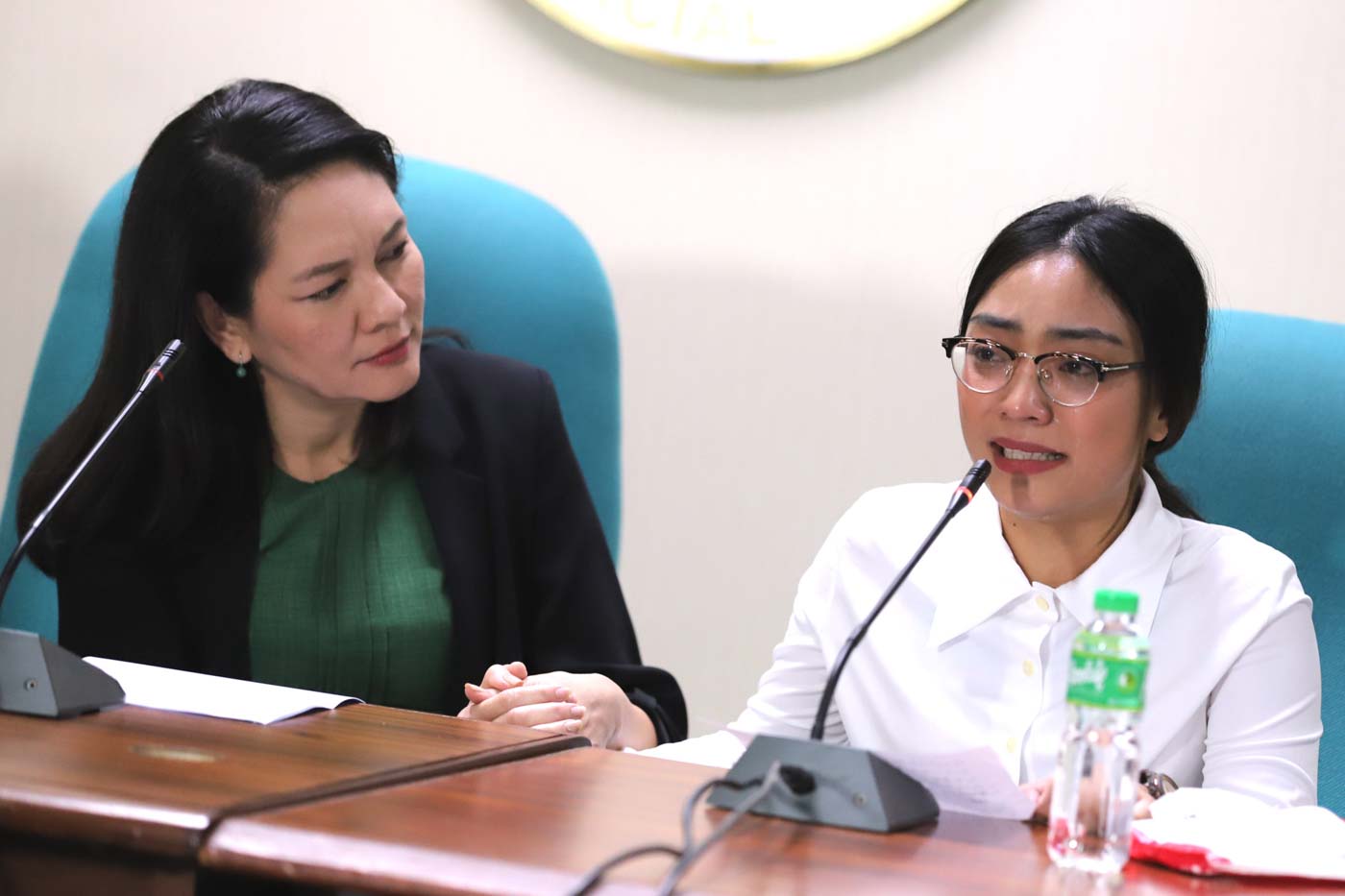 MANILA, Philippines (UPDATED) – A Taiwanese worker, whose passport was confiscated as she was made to work at a Philippine offshore gaming operations firm, alleged that the POGO was protected by a certain “Michael Yang.”

On Wednesday, February 12, rescued POGO worker Lai Yu Cian, 23, appeared before the media at the Senate with Senator Risa Hontiveros, who is currently investigating abuses of workers in the opaque POGO industry.

Lai said she was recruited online for an advertising job, but when she arrived in the Philippines in October 2019 with a tourist visa valid for 30 days, she was instead offered to work in a POGO in Makati.

Lai said she tried to escape several times, having been physically and sexually abused, but kept returning, as her employers confiscated her passport that has an already-expired tourist visa.

“There is a very powerful government [person] called Michael Yang. I heard about once or twice from my boss, saying they have a government person supporting their business,” Lai told reporters.

“I already told them that I want to go home, I want to go back to Taiwan, but they forced me to work for them,” Lai said, recounting how she worked like a “slave” for her employers.

Lai added her employers would drop Michael Yang’s name whenever they get mad at her.

“I heard about once or twice when my supervisor, they get mad at me, or sometimes they mention Michael Yang, but I don’t know who is he. My boss always says, he didn’t explain to me, just sometimes he shouts at me, and in my memories, once or twice, I hear the name,” Lai recounted.

On February 3, Lai was rescued by the National Bureau of Investigation special task force in Mandaluyong, along with 30 of her Chinese colleagues. Chinese Su Jin Kun, Wang Kun Peng, Su Zhi Yuan, and Chen Cai Bao were arrested during the operation.

The Taiwanese was rescued with the help of Filipinos, to whom she wrote a note asking for help from law enforcement authorities. (READ: Online gambling: Good for whose business?)

Asked if the Yang mentioned was the former “economic adviser” of President Rodrigo Duterte, Hontiveros said they haven’t yet checked the identity of Yang, as their “main concern is the humanitarian aspect.”

Ex-adviser Michael Yang had business interests in the Philippines as the owner of the DCLA shopping center in Davao, and enjoyed access to Duterte. Yang even hosted a private lunch for the latter on the first day of the President’s August 2019 trip to China.

Anti-crime advocate Teresita Ang See, the chairperson of the Movement for the Restoration of Peace and Order, said Lai’s experience was “not an isolated case.”

See said that another Chinese had sought for the organization’s help over an alleged cyberfraud business that fronts as a POGO.

At a Senate hearing in January, Hontiveros said that there might be a link between the influx of POGO workers and the rise of sex trafficking in the Philippines. There are over 100,000 POGO workers in the country, but industry insider said there may easily be around 200,000.

Hontiveros said the Senate has to “look into the possible links of POGO operations to our government officials” since an industry cannot bring “a whole spectrum of crimes into the country: illegal recruitment, illegal detention, sexual harassment, prostitution, etc,” without protection from the authorities.

She said she would raise this concern when the Senate conducts a hearing on POGO-related prostitution on Monday, February 17. “During the hearing, we have to find out if our government officials, policemen, and fiscals are involved. We need to a stop to these crimes,” she said in a mix of English and Filipino. – Rappler.com