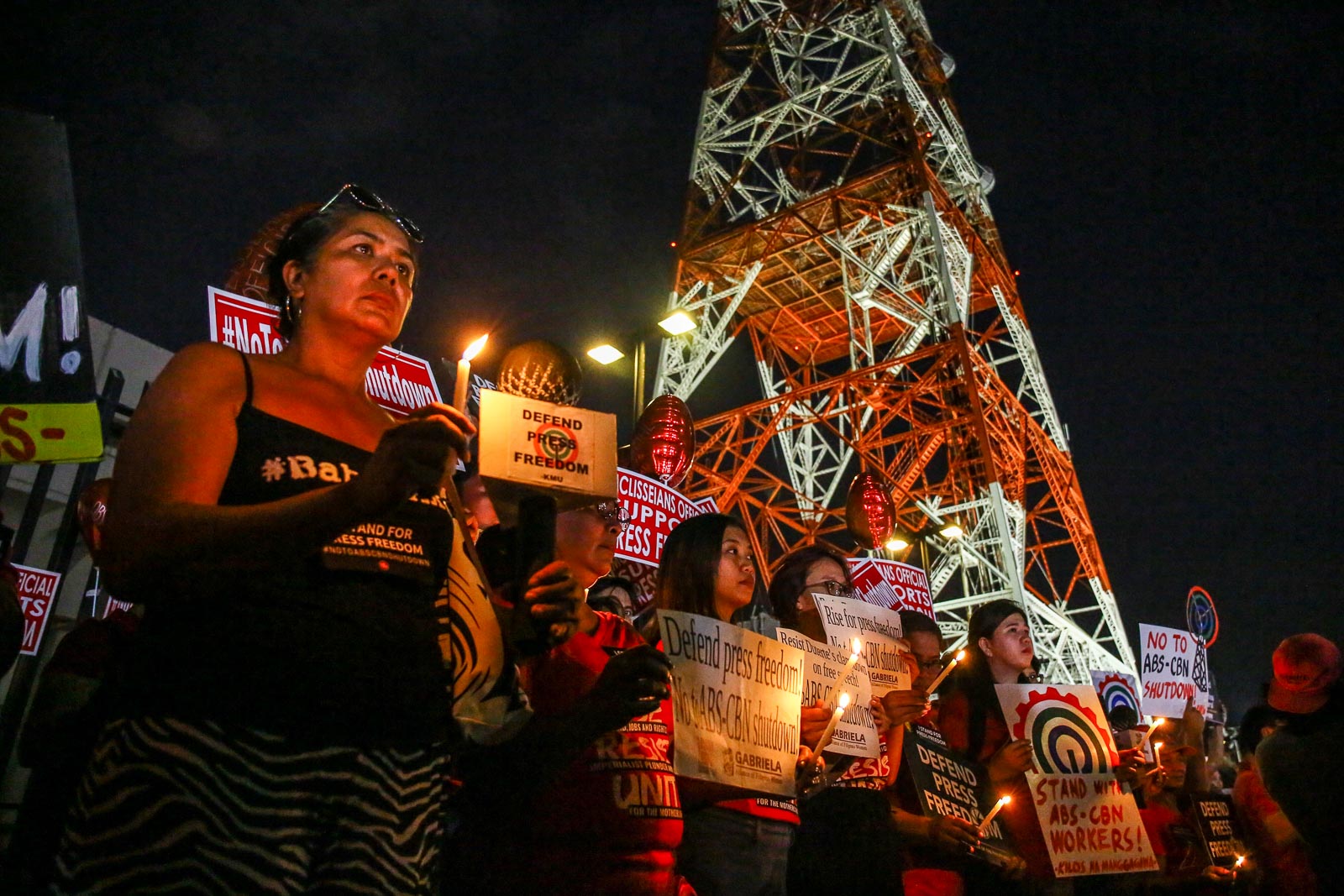 MANILA, Philippines – A week after he filed a quo warranto petition to void ABS-CBN’s network franchise, Solicitor General Jose Calida filed a motion to gag the broadcast giant on the case, spurring criticism from rights groups and lawmakers. (WATCH: ‘We’re on the side of truth,’ says ABS-CBN exec on franchise renewal)

“We want a gag order to be issued in this case so that facts can be decided upon evidence produced in court, and that the determination of such facts should be uninfluenced by bias, prejudice, or sympathies,” Calida said in a very urgent motion submitted before the Supreme Court (SC) on Tuesday, February 18.

The SC has given ABS-CBN 5 days to submit it’s comment on the gag motion.

The network giant’s franchise is set to expire on March 30, but it has not been discussed by Congress. Several bills tackling the franchise renewal have been pending on the House level, while Senate is set to discuss the issue on February 27 or earlier, in the hopes of moving the House to act. (TIMELINE: Duterte against ABS-CBN’s franchise renewal)

A day before Calida filed a motion to gag, Senate Minority Leader Franklin Drilon filed a joint resolution to extend the franchise to December 2022, in order to give Congress more time to study the bill.

Below are statements issued by rights groups on Calida’s move to gag ABS-CBN.

People’s Alternative Media Network said that Calida is “on a vicious roll” against freedom of expression, speech, and the press.

They said: “To request for a gag order over an issue that is inextricable from press freedom is not an attempt at silencing the network – it is also indicative of the fact that you are losing the battle in the arena of public opinion. Indeed, desperate times call for desperate measures.

“To use the terms ‘everyone acting on [ABS-CBN’s] behalf’ enables the state to target not only the network’s executives, or spokespersons, or legal team – but also everyone and anyone who dare speak on the issue. What Calida is requesting is for the Supreme Court to actually violate one of the primordial provisions of the Constitution – that ‘no law shall be passed abridging the freedom of speech, of expression, or of the press.’

“Gagging the public from any form of discussion on this landmark case is, in essence, gagging our fundamental freedoms. The implementation of such a gag order can lead to its use as a detestable precedent in similar cases involving our fundamental right to free expression.

“We call on the public to side with truth and democracy. We must not be intimidated by the enemies of press freedom.”

“First the government petitions to end the ABS-CBN franchise and now it is proposing to silence all critics with an absurd gag order on specious grounds. Why is President [Rodrigo] Duterte and the Philippines government so scared of independent opinions and a free press? Let’s hope the Supreme Court upholds the principle of freedom of expression and rules against the Solicitor-General’s request.”

“This unconscionable move reflects not only this regime’s intolerance of dissent, but also its desperation to silence independent voices, and exert control over citizens,” said Kabataan Party-list Representative Sarah Jane Elago.

The party-list said in a statement: “The order to shut down the operations of ABS-CBN and the OSG’s quo warranto petition are already direct manifestations, moreso SolGen Calida’s petition to Supreme Court to issue a gag order on the quo warranto case of ABS-CBN, that the government is much invested in gagging its critics – and, not to mention, in being insensitive to its people as it glaringly neglects the quality of life of its citizens as the complete shut down of the company will create a bigger ripple in its cost to freedom of the press and to the democracy in the country; on top of thousands of families and workers which will be greatly affected – a similar move conducted by the dictator Marcos during his fascist regime.

“Kabataan Partylist challenges the media to capture the attacks on press freedom as a nationwide offense against democracy, not isolating the case of ABS-CBN, but to also decisively hold the state accountable for the illegal arrests of activists and journalists like Frenchiemae Cumpio who has been detained with the Tacloban 5 earlier this week.

“The representation further urges Duterte and his minions to stop all attacks against the press, activists, and its critics, to allow the franchise renewal of ABS-CBN, and to grant the immediate release of Frenchiemae with the illegally arrested Tacloban 5!”

House Deputy Minority leader and Bayan Muna Representative Carlos Isagani Zarate said that Calida’s move is another measure to muzzle critics and the opposition from airing their views on the issue.

“If SolGen Calida cannot take the heat then he should not have filed the harassment quo warranto case in the first place. He should have let Congress do its job in deciding the renewal issue of the ABS-CBN’s franchise,” he added.

“Indeed, this is not just about the issue of renewal of ABS-CBN franchise, but, even involved in large part the issue of freedom of the press and the further shrinking of democratic space in our country. Solgen Calida’s move is emblematic of the administration’s aversion to dissent and criticism.”

“If Solicitor General Jose Calida did not gag himself from advocating and filing a quo warranto petition against ABS-CBN Corporation, why should he ask the Supreme Court to gag supporters and oppositors from expressing their views on the merits or demerits of his petition?

“After violating the freedom of the press by filing an unwarranted and misplaced quo warranto petition against the media giant, Calida is now transgressing the freedom of expression, both of which are constitutionally guaranteed rights.

“The Senate and House Rules provide that the doctrine of sub judice does not apply to Senators and Representatives in their exercise of lawmaking.

“Moreover, it is safe to assume that justices of the Supreme Court are not influenced by opinions expressed by non-litigants.

“Gag orders are issued to guarantee fair trials and to enable the efficient administration of justice not to curtail the freedom of expression and of the press or restrict the public’s access to information.”

(Calida is childish, he joined a fight that wasn’t his, and when he’s hit he wants to hide and won’t fight back.) – Rappler.com