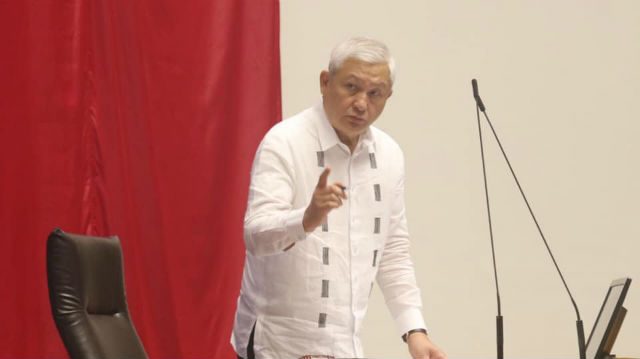 Pimentel said this during the House committee on constitutional amendments’ hearing on Wednesday, February 19, about two weeks since PDP-Laban lost 4 key members – including two House deputy speakers – to the National Unity Party (NUP).

“I think it’s about time that we should stop the practice of political butterflies. We have seen the culture of Philippine politics. Politicians have the propensity to change parties for expediency. Whoever is the power that be, kung ano’ng partido niya eh doon po tayo pumupunta (whatever his party may be, that’s where we go)!” said the Surigao del Sur 2nd District congressman.

He cited the time when politicians jumped ship to the Lakas-Christian Muslim Democrats party when Gloria Macapagal Arroyo became president from 2001 to 2010. When Benigno Aquino III of the Liberal Party succeeded Arroyo, many of the same politicians joined the new ruling party.

(What’s happening here is so embarrassing. The time of the turncoats should end. We should put a stop to the practice of politicians not standing up for their principles.)

Before Rodrigo Duterte ran and won for president under PDP-Laban in 2016, the party only had 3 members. Its numbers grew nationwide after Duterte’s rise to power.

In the House, PDP-Laban had around 125 members at the start of Duterte’s term, but the number is now down to just 62 district lawmakers. A good chunk of those who left the ruling party have joined NUP and the Lakas-Christian Muslim Democrats party.

On Wednesday, the House panel continued its deliberations on the constitutional amendments proposed by the Inter-Agency Task Force (IATF) on Federalism and Constitutional Reform.

The IATF wants to add strong anti-turncoatism provisions in the Constitution, including barring politicians from switching parties during their term as well as prohibiting them from jumping ship a year after elections and a year before the next polls.

But Magsasaka Representative Argel Cabatbat believes the House may be better off with legislating a new anti-turncoatism law, instead of amending the Constitution.

He also pointed out that the IATF proposal does not bar disgruntled members from forming a new party instead.

The House committee was supposed to vote on the IATF’s proposed amendments already, but panel chairperson Rufus Rodriguez said they “could not rush” this since several members still want to go through every provision.

“We see here that we could not rush this because that was precisely the question in December…. Because we had an executive session, it was [criticized as] secretive…so this will be open now. We consider that as a better procedure,” Rodriguez told reporters in an ambush interview.

The House committee had already approved a resolution amending parts of the charter in December 2019, but they did so in a closed-door meeting. After receiving backlash, the panel decided to recall the measure and deliberate on the amendments submitted by the IATF to Congress. – Rappler.com