Senate hearing on ABS-CBN: No breach of laws, franchise terms 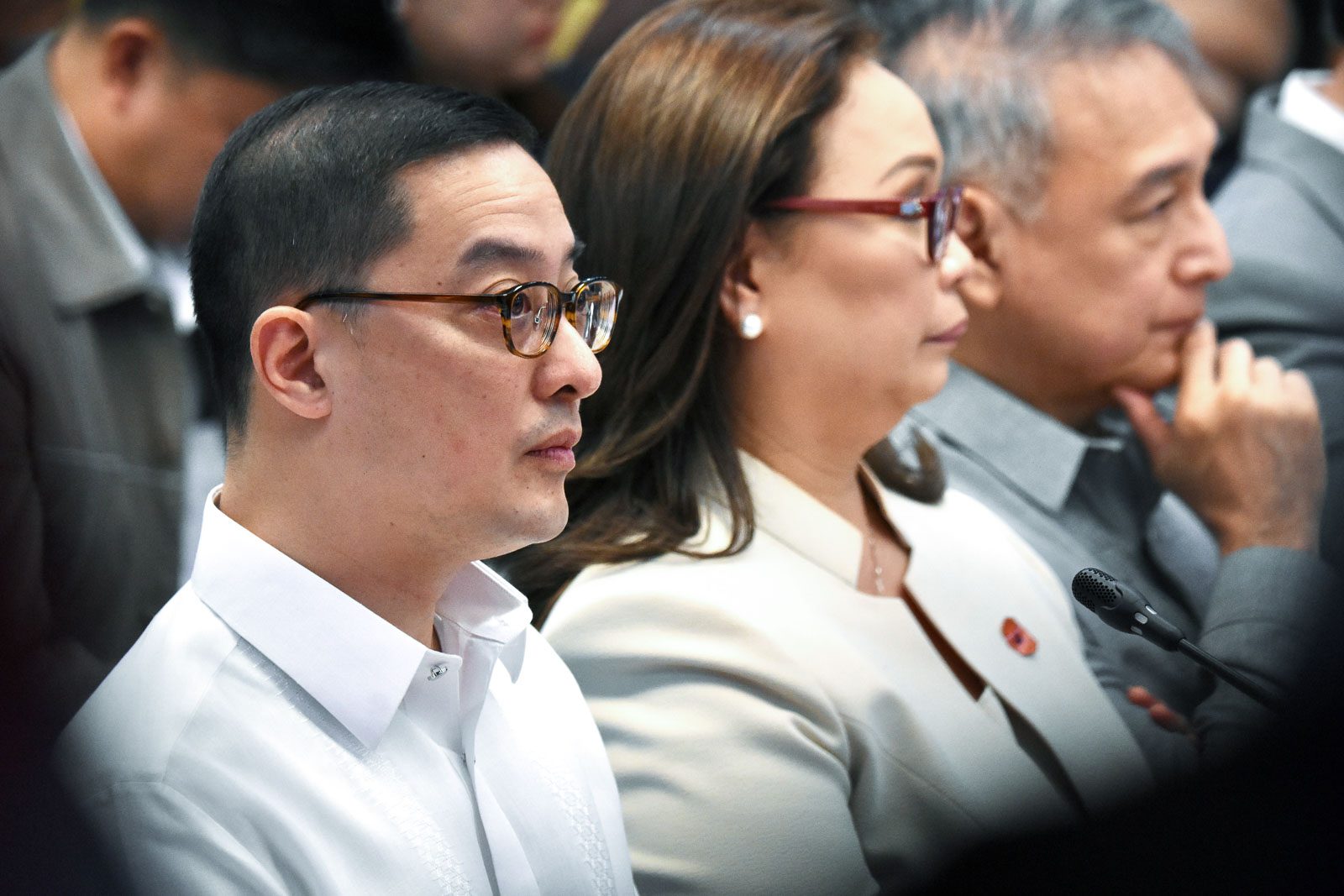 MANILA, Philippines – While the House of Representatives wouldn’t deliberate yet on the bills seeking to renew the franchise of broadcast giant ABS-CBN, the Senate committee on public services started the ball rolling on Monday, February 24, with a hearing on the network’s compliance with the terms of its franchise that’s about to expire.

Amid criticisms by House Speaker Alan Peter Cayetano, himself a former senator, that the upper chamber was encroaching on the House’s power, senators said it had been a longstanding tradition of the Senate to hear such bills while waiting for the House’s approved version.

Public services panel chair Grace Poe previously said what they were tackling was ABS-CBN’s compliance with the terms and conditions of its franchise since Solicitor General Jose Calida had filed a quo warranto petition against the network, accusing it of violating its franchise terms. Information gathered from the investigation would guide the Senate on whether to approve bills seeking to give ABS-CBN a fresh franchise.

Republic Act 7966 that grants ABS-CBN’s franchise is set to expire 25 years from March 30, 1995, but since the law became effective only 15 days after its publication on April 19 of that year, the justice department says the franchise actually expires on May 4, 2020.

The committee also sought to take up the resolution seeking to extend the media giant’s franchise until the end of 18th Congress in 2022 while the billse seeking to grant a 25-year franchise has yet to be passed. (READ: What’s taking Congress so long to tackle ABS-CBN’s franchise?)

At the hearing on Monday, senators asked resource persons from government agencies, as well as ABS-CBN executives, to set the record straight on allegations against the network. The network was cleared over issues of taxes, labor conditions, pay-per-view service, and Philippine Depositary Receipts.

The Bureau of Internal Revenue (BIR) on Monday said that the media giant had fully complied with the tax requirements of the government.

“They are regularly filing and paying their taxes for the past number of years,” said Simplicio Cabantac Jr, BIR Large Taxpayers Service head.

Getting permission fro ABS-CBN executives present to disclose the company’s tax payments, Cabantac said it paid at least P14.398 billion from 2016 to 2019.

ABS-CBN president and CEO Carlo Katigbak said the company withheld from its employees and remitted to the BIR a total of P8.859 billion in income tax payments from 2009 to 2018.

In 2019, ABS-CBN settled P152.44 million in tax payments with the BIR, to pay its assessed deficiency in income tax, value-added tax, and documentary stamp tax payments.

Former ABS-CBN corporate services head Mark Nepomuceno said the Department of Labor and Employment had just cleared the media giant for its compliance with general labor standards, occupational safety and health, and security of tenure.

Answering questions from senators, Nepomuceno explained that the media network had a total of 11,071 workers, of which 5,918 were directly hired by Channel 2.

Nepomuceno also told the Senate hearing that the media giant’s employees even get “above the mandated benefits of the government.”

Senator Joel Villanueva asked Nepomuceno if ABS-CBN was practicing the end-of-contract scheme, to which the latter categorically said, “No.”

In the case of independent contractors, such as artists, writers, and directors, Nepomuceno said that it depended on the contract negotiation. But Nepomuceno gave assurances that the “bulk” of the contractors were provided with the mandatory benefits, “among other benefits.”

“For so long that ABS-CBN can afford to do it, we will continue to find ways to better take care of our employees, but it has to be done in ways that allows us to sustain the help and the caring that we give them,” Katigbak said.

Lawmakers also probed the network’s “Kapamilya Box Office” or KBO pay-per-view service through its ABS-CBN TV Plus digital box, which is under the franchise of ABS-CBN Convergence.

Solicitor General Calida’s quo warranto case had questioned the KBO service, saying ABS-CBN’s broadcasting franchise does not allow it to offer conditional access – that is, to charge customers for access to certain content otherwise unavailable on its free channels.

Responding to a question from Senator Ronald dela Rosa, Telecommunications Commissioner Gamaliel Cordoba reiterated an opinion from Justice Secretary Menardo Guevarra that franchise laws cover “commercial purposes,” such as the offering of a pay-per-view service. Section 1 of Republic Act 7908, which allows ABS-CBN Convergence’s broadcast operations, states that: “[It is] hereby granted a franchise to construct, operate, and maintain, for commercial purposes.”  (READ: ABS-CBN case: Testing the limits of corporate structuring practices)

But Cordoba said that ABS-CBN introduced the service even without the National Telecommunications Communications (NTC) guidelines yet. The fine for such violation, Cordoba said, amounts to a measly P200.

If there are penalties, Senate President Pro-Tempore Ralph Recto said that the NTC can just impose a fine on ABS-CBN, rather than shutting it down.

Asked by Recto if ABS-CBN has any standing penalties with the NTC, Cordoba said, “None.”

The inquiry touched on the network’s issuance of Philippine Depositary Receipts (PDRs), an investment instrument that Calida alleged as a form of foreign ownership if issued to non-Filipino investors.

Amatong explained that a legal interpretation from 1999 stated that PDRs were not equivalent to certificates of ownership. However, jurisprudence on the definition of PDRs – whether they amount to ownership similar to shares of stock – has evolved in recent years, Amatong added.

Poe pointed out that companies with PDRs should then have been notified of any changes in the legal opinion or interpretation of the investment instrument, and should have been given an opportunity to rectify and fulfill the legal requirement on Filipino ownership, which for media companies is supposed to be 100%.

Issuing PDRs is a common practice among Philippine companies including media outfits. In the hearing, Amatong said that GMA and Rappler are among several other companies that had issued PDRs.

The SEC in 2018 attempted to revoke Rappler’s license to operate over its issuance of PDRs to the Omidyar Network. Rappler appealed the case, which has been remanded to the SEC for review. The SEC has yet to issue a resolution on Rappler’s case.

At the hearing, Amatong said that PDRs may differ among companies, and violations in one would not necessarily entail violations in others. Poe then asked Amatong whether the SEC has reviewed the PDRs of companies for violations.

The SEC has not done such a review, Amatong replied, adding that he “would rather not make a categorical statement at this time” as to whether there are violations in ABS-CBN’s PDRs, given the pending case at the Supreme Court.

While it seemed that the Senate hearing helped ABS-CBN clarify the issues hurled at them, the route to renewing the network’s franchise remained unclear.

Poe said that the Senate committee on public services has yet to decide if there will be another hearing, but in the meantime will “work with the Department of Justice closely.” Guevarra, however, divulged to reporters that he had no intention of issuing a formal legal opinion to NTC.

Guevarra’s position is that the NTC can issue a provisional authority – which it can withdraw anytime – to ABS-CBN to let it operate beyond its franchise expiry on the basis of the principle of equity.

In a media interview, Senate Minority Leader Franklin Drilon said that the granting of a provisional permit is a measure that would be done on “shaky ground.” The ideal situation still, he said, is to pass a resolution to extend the franchise until the end of 18th Congress.

Even then, Congress has around 7 session days before it adjourns on March 13. It will be back on May 4, on the same day of the ABS-CBN’s franchise expires.

“I myself admit that there is a chilling effect dahil NTC lamang ang magbibigay ng provisional authority, na ibig sabihin ay puwedeng i-withdraw anytime (because only NTC has the power to grant a provisional authority which means that it can be withdrawn anytime), especially that NTC is a quasi-judicial body under the executive department,” Drilon said. – Rappler.com