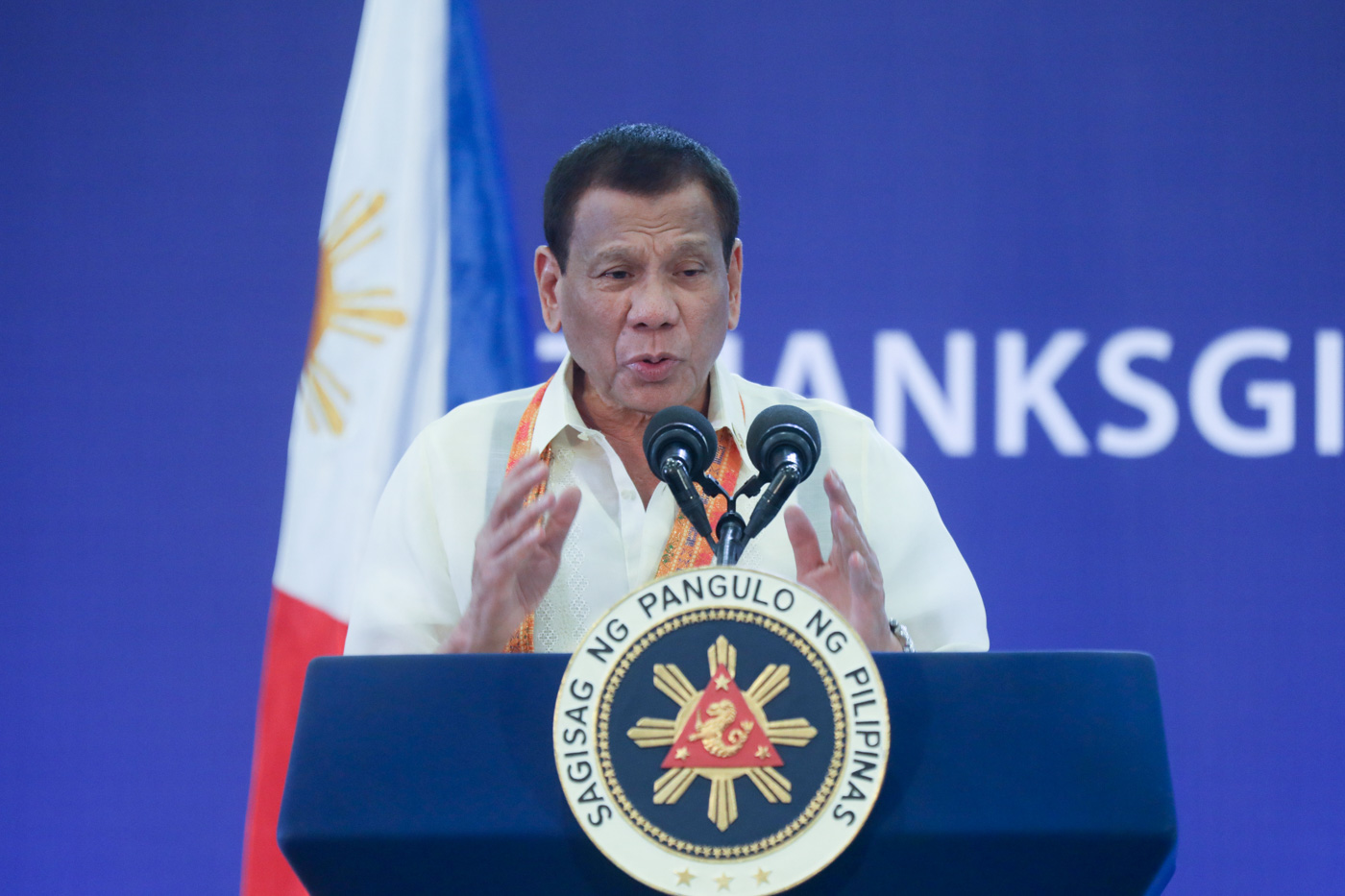 MANILA, Philippines – Apology accepted, but he insists the matter is out of his hands.

President Rodrigo Duterte on Wednesday evening, February 26, said he accepts the apology of broadcasting giant ABS-CBN for having failed to air P7 million worth of a total P65 million in political advertisements paid for by his campaign ahead of the 2016 presidential elections.

However, Duterte did not guarantee an end to the network’s franchise troubles, saying its fate lies in Congress, particularly the House of Representatives.

“Yes, I accept the apology, of course…. But, fundamentally, really, ang decision nasa (the decision is with the) House ngayon (now), not so much the Senate, because the Constitution says all of these things must originate from the lower House,” Duterte told reporters on the sidelines of oath-taking of the National Commission for Culture and the Arts officials and presentation of the 12th Ani ng Dangal awardees in Malacañang.

“I tell you, I am not going to interfere, wala talaga (not at all),” added Duterte, who also claimed he had “kept a healthy distance” from Congress’ discussions on ABS-CBN’s franchise, which will expire on May 4.

The House has kept deferring deliberations on bills renewing the network’s franchise, without which it would be forced to go off the air. (READ: Scenarios: What’s next for ABS-CBN’s franchise after Senate hearing?)

Early in his term, Duterte claimed he was “swindled” by ABS-CBN when it did not air political advertisements he had paid for. He publicly threatened to deny the network its legislative franchise and suggested that its owners, the Lopez family, would be better off selling the company.

At a Senate hearing Monday, February 24, ABS-CBN president and CEO Carlo Katigbak apologized for having offended Duterte, and explained how legal restrictions on the broadcast of political advertisements prevented the network from airing some of Duterte’s placements.

Senator Bong Go, Duterte’s right-hand-man, had said that Duterte’s feelings were hurt that the network neglected to play some of his campaign spots, and yet it ran an advertisement that campaigned against Duterte.

After Katigbak apologized, Go said he would “appeal” to Duterte to let ABS-CBN off the hook for the sake of its 11,000-plus workers.

Besides Duterte’s hurt feelings, the Senate inquiry unearthed no major legal violations by the network.

ABS-CBN refunded Duterte for the unaired placements, but a portion of the balance – P2.6 million – was delayed, and he refused to accept it.

On Wednesday, Duterte said he would no longer accept the P2.6 million, and he would rather have ABS-CBN donate the amount to “a charitable institution of their choice.”

No power over the Solicitor General?

With both houses of Congress tackling possible remedies to extend ABS-CBN’s legal cover to stay on air beyond May 4, the next question then leads to the quo warranto case filed against the network by Solicitor General Jose Calida, the government’s lawyer.

The case essentially accuses ABS-CBN of violating its franchise by offering a pay-per-view service, having a subsidiary not offer public shares of stock, and issuing Philippine Depositary Receipts (PDR) that Calida claimed to be a form of foreign ownership.

Having accepted the network’s apology, would the President then have the Solicitor General withdraw the quo warranto petition?

“I cannot tell him to stop,” Duterte told reporters, claiming that Calida works independently of him.

“The [Solicitor General] can always announce that there is a violation of law and that he is going to investigate it…. The [Solicitor General] does not clear with me, unlike the Secretary of Justice,” Duterte added, referring to Secretary Menardo Guevarra, who consults with him or takes up matters in Cabinet meetings before taking action, he said. – Rappler.com