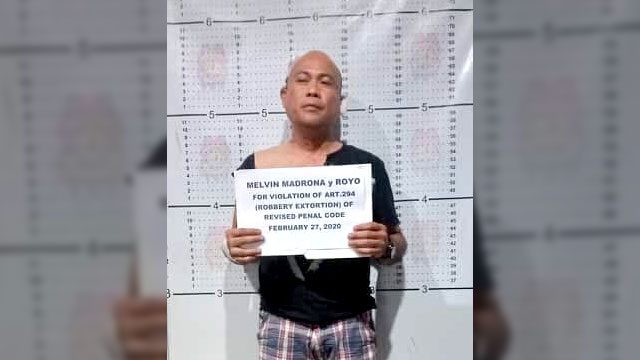 Facebook Twitter Copy URL
Copied
(UPDATED) Major Melvin Madrona, who was arrested in an entrapment operation in a cockpit, is accused of demanding P5,000 weekly 'protection money' from the owners of a KTV bar in Bacolod City

MANILA, Philippines (UPDATED) –The chief of the Philippine National Police Criminal Investigation and Detection Group (PNP-CIDG) in Bacolod City was arrested for extortion in a sting operation inside a cockpit in Bacolod City on Thursday, February 27.

The PNP said in a statement on Friday, February 28, that agents of its Integrity Monitoring and Enforcement Group (PNP-IMEG) arrested Major Melvin Madrona and his alleged accomplice, cockpit worker Jay-R dela Cruz, after they received P5,000 in marked bills from one of the complainants – owners of a KTV bar who were allegedly forced to pay the amount every week as “protection money” to spare their bar from police raids.

PNP-IMEG director Colonel Ronald Lee said Madrona and Dela Cruz are under the custody of the PNP-IMEG. They face robbery-extortion charges, while an administrative case would be filed against the police officer.

Lee said the arrest was in line with the directive of PNP chief General Archie Gamboa “to go after rogues in uniform [regardless] of their rank and stature.”

“The complainants said they were told that by giving P5,000 every Thursday, their KTV bar will not be raided,” Lee said.

Lee said that based on their investigation, the Bacolod City CIDG led by Madrona raided the KTV bar on February 8 and arrested Pesquera, 10 female employees who worked as dancers, and 12 customers.

Lee said that the cops brought the group to their office and released them the following day on the condition that Pesquera would give them P5,000 each week.

The complainants also accused Madrona of forcing them to shoulder his travel and food expenses and hotel accommodation amounting to P6,000, which they personally handed to him in his office.

The complainants said they began paying the protection fee on February 20, which they handed to someone Madrona identified as “Police Senior Master Sergeant Nabarte,” at the Criminal Investigation and Detection Unit 6 headquarters. Madrona supposedly made the payment instruction in a phone call.

Lee said they were still checking the real identity of “Nabarte.”

Lee also said that Madrona had a previous record when he was assigned to Quezon City Police District Station 5.  On March 22 2017, an overseas Filipino worker filed charges against Madrona for physical injury, arbitrary detention, and grave coercion after Madrona allegedly mauled him following a vehicular accident.

Madrona, who assumed the post as head of CIDG-Bacolod in January, denied the allegations hurled against him.

He said that they caught the KTV bar engaging in “indecent dancing activities.”

He accused the arresting officers, whose faces were covered, of hurting him during the entrapment operation.

Madonna also claimed he was barred from getting a lawyer.

Meanwhile, the PNP-IMEG was also said to be monitoring 4 other police personnel in  Negros Occidental for alleged illegal activities. – With a report from Marchel Espina/Rappler.com