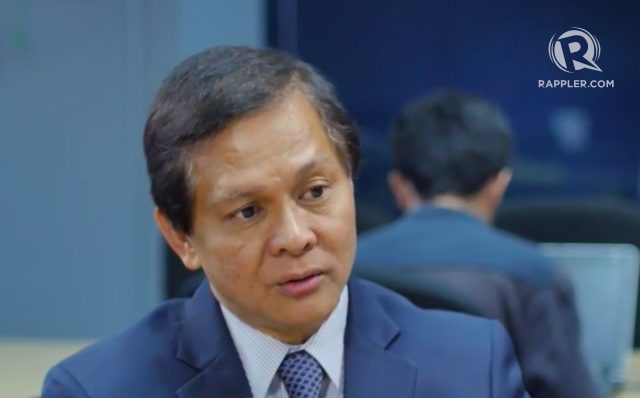 Facebook Twitter Copy URL
Copied
Even Justice Secretary Guevarra recognizes that his own solution could be brought to court. At least, he says, Congress can 'provide a tougher armor.'

MANILA, Philippines – Integrated Bar of the Philippines (IBP) national president Domingo Egon Cayosa cautioned government on Friday, February 28, against granting network giant ABS-CBN a provisional permit that will allow it to continue operating after its franchise expires on May 4.

“If both houses of Congress can anyway have a timely consensus, it may be better for them to decide whether or not to pass a franchise law in accordance with the Constituion rather than a ‘stop-gap’ joint resolution authorizing  NTC to administratively issue a provisional authority that theoretically can be questioned by interested parties in another quo warranto case before the courts,” Cayosa said in a message to reporters.

Earlier Justice Secretary Menardo Guevarra floated the possibility of the National Telecommunications Commission granting a provisional permit as an “equitable” solution to the problem. (READ: What are legal grounds for ABS-CBN to air after May 4?) House Speaker Alan Peter Cayetano also seemed keen about it.

What’s the problem? Broadcasters may not operate without a franchise. ABS-CBN is pushed to a corner now because the House is not acting on bills seeking to renew the franchise.

With the franchise expiring on May 4, there is a big question on whether or not ABS-CBN has to shut down, with all its nearly 11,000 employees losing their jobs for an indefinite time.

In 2003, the Supreme Court decided in the case ACWS vs NTC that the NTC cannot grant a provisional permit to a broadcaster that no longer has a franchise. This will be the situation of ABS-CBN after May 4.

In his legal “guidance” – which is short of the legal opinion that would carry more weight in court – Guevarra said that an equitable workaround would be for Congress to authorize the NTC in a concurrent resolution to issue the provisional permit.

Guevarra’s rationale for this is – because the grant of a franchise is a legislative act, the provisional permit given by the NTC would also be a legislative act via a concurrent resolution.

Guevarra acknowledged that this solution could be challenged in court, that’s why he’s suggesting that both the House and the Senate agree.

Another Supreme Court matter? Guevarra did not answer when asked who is likely to challenge the permit.

It can be competitors, or it can even be the Office of the Solicitor General (OSG), as contemplated by Senator Sherwin Gatchalian who asked what would happen if the OSG files an administrative complaint against ABS-CBN before the NTC.

“Medyo mahirap po ang tanong ninyo but that will be two Cabinet secretaries, and well, based on, may lumabas na department order before that the opinion of the secretary of justice would take precedence. Ibig sabihin sila ang puwedeng mag-render ng opinion, hindi po ang Office of the SolGen,” NTC Commissioner Gamaliel Cordoba had said.

(That question is difficult but that will be two Cabinet secretaries, and well, based on a department order, it’s the opinion of the secretary of justice that would take precedence. It means it’s the DOJ that can render an opinion, not the Office of the Solicitor General.)

The IBP’s Cayosa said, “Where there are sound arguments from both sides, the SC can decide either way depending on the truth supported by evidence, law, jurisprudence, justice, and judicial temperament.”

But as he implied: why have a “stop-gap” solution that will be questioned before the Supreme Court later on? Why not just act on the bills renewing the franchise?

“We trust and we pray that the proper authorities do their sworn duties well and in a timely manner, ever mindful that their power comes from law, public trust, and for the public interest,” said Cayosa. – Rappler.com