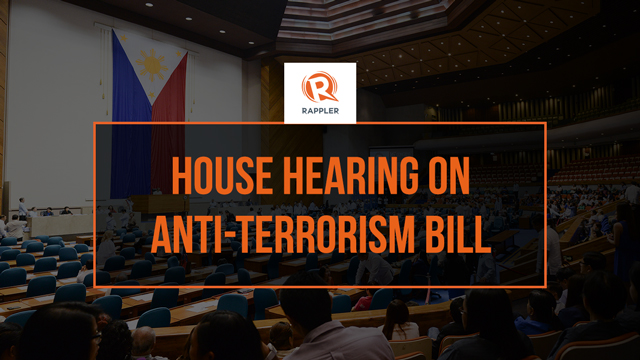 Bookmark to watch the livestream at 1 pm.

MANILA, Philippines – The House committees on public order and safety as well as national defense and security will continue hearing bills that would expand the definition of terrorism by amending parts of the Human Security Act of 2007. At least 3 bills filed in the House want to penalize with life imprisonment those who would be found guilty of the following:

But the 6 progressive lawmakers from the Makabayan bloc want the Human Security Act repealed through their House Bill No. 482, arguing the law has long been abused by law enforcement agencies to file trumped up charges against activists and human rights leaders.

The Senate already approved on 3rd reading its version of the anti-terrorism bill, which would provide law enforcers the legal tools to protect people from terrorism and at the same provide safety nets to protect the rights of those accused of the crime.

Watch the House hearing on the anti-terrorism bill on Tuesday, March 3, at 1 pm. – Rappler.com