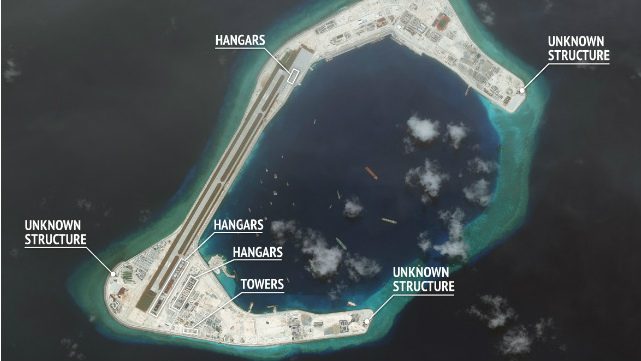 Facebook Twitter Copy URL
Copied
Since China has already turned Zamora Reef into a military base, it will likely keep deploying boats – believed to be militias – just 'to deny us some space,' says the Philippines' national security adviser

This comes a day after the Armed Forces of the Philippines Western Command reported that some 136 Chinese vessels were spotted in January and February near the Philippines’ largest island in the Kalayaan Island Group, part of what is known internationally as the Spratlys.

The vessels were likely deployed from Zamora (Subi) Reef, just beyond the horizon from Pag-asa Island. China has reclaimed the formerly submerged reef and turned it into a military base, complete with a 3-kilometer airstrip worthy of fighter jets, and a harbor for vessels.

At 586 hectares, China’s military base on Zamora Reef – a feature claimed by the Philippines as sovereign territory – is twice the size of the Bonifacio Global City business district in Taguig City.

“That’s only 14 nautical miles from Pag-asa, so we would expect that they will continue to deploy there, but not for confrontational activities but for fishing and simply to occupy some space, to deny us some space probably,” Esperon told reporters on the sidelines of an executive session with members of the House committee on the West Philippine Sea at the House of Representatives.

“They’re still there,” Esperon added, referring to about 30 to 60 Chinese vessels lingering near Pag-asa, which is inhabited by around 250 Filipino civilians.

No longer surprised at reports of the vessels’ presence, Esperon said there were as many as 146 of them prowling the waters around the island in July 2019. The Department of National Defense (DND) had, in fact, reported a total of 322 such vessels seen in the area in 2018, and again in 2019.

Does the government consider this a concern? “It is. That is why we have written the Chinese embassy our notes verbales. There are positive reactions. Kung minsan nagre-reduce naman sila (Sometimes they do reduce their presence),” Esperon said.

But because they have a “big base” in the area, there are always Chinese vessels in the vicinity, he added.

Although appearing to be fishing boats, the vessels are believed to be militias, or a paramilitary force, of the Chinese government.

“When they are fishing boats and they are capable of bringing with them defense or offensive weapons, then they could be treated as militias. But as we see it, there are no mounted guns. They’re simply fishing boats that do not do a lot of fishing. So what is that? They simply occupy space,” Esperon said.

But the boats could be doing more than just stay adrift.

“We have been saying this even before. China has proxies…swarming our territorial waters with Chinese foreign vessels,” said Bayan Muna Representative Carlos Zarate, a member of the House committee who attended the executive session, which was off-limits to media.

“We suspect, and it’s really confirmed by several other reports, that these Chinese foreign vessels are actually Chinese militias doing not just fishing but also intelligence gathering for China,” Zarate added.

Besides, the waters around Pag-asa Island don’t make for good fishing in the first place, the lawmaker pointed out.

Esperon said the government has consistently registered its opposition to the vessels’ presence through notes verbales sent to the Chinese embassy in Manila, although none has been issued yet to protest the recent presence of vessels near Pag-asa Island.

In 2019, Foreign Secretary Teodoro Locsin Jr said he “fired off” one diplomatic protest after another as instances of Chinese vessels’ incursions were reported by security officials and the military.

At least 389 Chinese vessels of different types were spotted in Philippine waters from January to August 2019, the DND reported in September 2019. Among those were China Coast Guard vessels and warships of China’s People’s Liberation Army-Navy.

“Even as we speak now, the claimants in the West Philippine Sea are still very much active, in fact aggressive, especially China,” Zarate told reporters.

In July 2016, an international arbitral tribunal sanctioned by the United Nations Convention on the Law of the Sea affirmed the Philippines’ sovereign rights in the West Philippine Sea, and debunked China’s spurious claim of ownership over nearly the entire body of water.

President Rodrigo Duterte has not strongly insisted that China comply with the ruling, and instead broadened political and economic ties in the hope that friendlier bilateral relations would make China less assertive of its claims.

Despite this, Chinese vessels have continued to ply Philippine waters unchecked, restricting Filipinos’ access to their own maritime resources. – Rappler.com