Sara Duterte’s party to Cayetano: Ungab ouster ‘an insult to the President’

Mar 4, 2020 9:12 PM PHT
Mara Cepeda
Facebook Twitter Copy URL
Copied
But Hugpong ng Pagbabago says it 'does not want to spar with Cayetano' but merely wants to 'sit and watch his show' in the House where the Speaker is crying coup d'etat 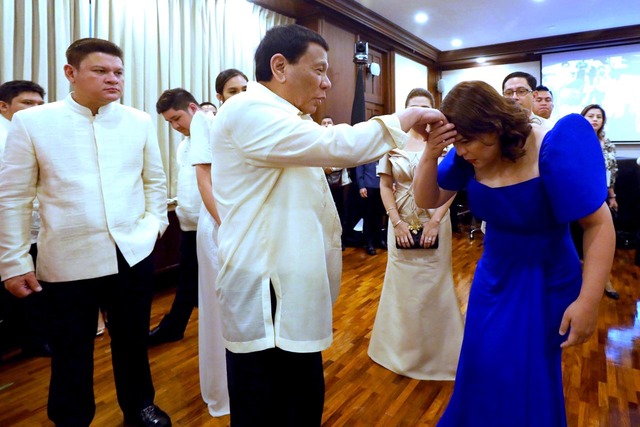 MANILA, Philippines – The word war rages between Speaker Alan Peter Cayetano and the Hugpong ng Pagbabago (HNP) political powerhouse led by Davao City Mayor Sara Duterte over the removal of one of its party stalwart in the House leadership.

In a statement on Wednesday, March 4, HNP said no less than President Rodrigo Duterte, Sara’s father, “chose” Davao City 3rd District Representative Isidro Ungab to be chairperson of the House committee on appropriations – the panel tasked to scrutinize the annual national budget.

“He was specifically chosen by President Duterte as chairman of the committee and the last time we checked, the President never ordered the removal of Ungab. If anything, the removal was an insult and affront to the President — and not the party,” HNP said.

The political alliance also pointed out that it did not say Ungab’s sacking as appropriations panel chair was an attack on HNP when it slammed it as “grossly unacceptable.”

Still, HNP said it does not want to fight Cayetano and merely wants to “watch his show” – alluding to the Speaker’s insistence that Marinduque Representative Lord Allan Velasco had tried but failed to oust him. (READ: Is there a House coup or is Cayetano just out to scrap term-sharing with Velasco?)

“HNP does not want to spar with Cayetano. We want to sit and watch his show,” HNP said.

Sara Duterte is a close friend of Velasco, who even named his youngest daughter after the president’s daughter.

The Speaker and his allies were reportedly pissed off after Ungab supposedly told President Duterte and Budget Secretary Wendel Avisado about the alleged multibillion-peso illegal insertions in the P4.1-trillion national budget for 2020.

This allegedly prompted the Department of Budget and Management (DBM) to say that it would withhold the release of P80 billion worth of funds realigned by lawmakers under the 2020 budget pending a review of the allocations.

In a separate press conference on Wednesday, Cayetano reiterated Ungab was kicked out because he “was not a team player.” (READ: Cayetano: Ungab, Leachon ousted because ‘they’re more interested in intrigues’)

“Because from the start, we are working together, isang grupo (one group), how to do it. But Sid had his own ideas, own criticisms, so hindi siya naging (so he wasn’t a) team player,” Cayetano told reporters at the Batasang Pambansa.

“So I don’t know directly or indirectly if this led to some intrigues with the DBM and with Malacañang sa pondo (with funds). But it’s been settled and we’ve communicated to Malacañang that everything’s above board,” he added.

HNP had fielded Ungab for the speakership last year. The support of both Sara Duterte and her brother, Davao City 1st District Representative and Deputy Speaker Paolo Duterte, made Ungab a threat in the fierce battle for the highest post in the House.

But the Davao lawmaker later withdrew his bid for the speakership when the President endorsed a term-sharing agreement between Cayetano, the President’s failed running mate in the 2016 elections; and Velasco, the candidate of the ruling Partido Demokratiko Pilipino-Lakas ng Bayan.

Still, it’s no secret that there’s bad blood between Cayetano and Sara Duterte, who once accused the Taguig City-Pateros congressman of making a “veiled threat” against her during the heated speakership race last year.

Despite not being a lawmaker, Sara Duterte is no stranger to House coups.

She had played an instrumental role in the House takeover in 2018 that unseated Davao del Norte 1st District Representative Pantaleon Alvarez as Speaker and replaced him with former president and Pampanga 2nd District representative Gloria Macapagal Arroyo. – Rappler.com