‘We are losing fight’ vs dirty money, Gordon tells AMLC MANILA, Philippines (UPDATED) – Senator Richard Gordon on Thursday, March 5, expressed concern that the Philippines was losing its fight against dirty money because of the Anti-Money Laundering Council’s (AMLC’s) lack of “enthusiasm” to investigate suspicious funds entering the country.

Gordon made the observation at the Senate blue committee hearing on money laundering linked to the booming Philippine Offshore Gaming Operators (POGO) industry, after AMLC chief Mel Racela said that the multimillion-dollar inflows into the country earlier flagged by Gordon as “suspicious” were “not unlawful” just yet.

An exasperated Gordon cut off Racela and said: “I don’t see any enthusiasm on the part of AMLC to make this thing work. In the meantime, we are losing. We don’t know where the money is going.”

Senators are frustrated that at least $663 million (P33.54 billion) has entered the Philippines from September 2019 to March this year, yet the AMLC has not acted on it. (READ: Drilon to Pagcor: ‘Stupid mindset’ to allow POGOs for money)

“The AMLC was created to protect us from illicit money coming here and allow us to prevent drugs and terrorism,” said Gordon, chairman of the Senate blue ribbon committee.

Why the slow government action? The AMLC said that it had been tipped off about the suspicious funds, but it was still in the process of gathering intelligence information, starting in March 2019.

Gordon said that a certain Rodriguez group had already brought in at least $282 million (P14.26 billion) into the Philippines since September 2019 until Wednesday night, March 4.

The senator said that Simon Rodriguez, who is part of the same group, was apprehended in 2019 for not declaring the bulk of cash he had brought into the country with him, yet he was still allowed to bring in millions of dollars again after declaring it.

“At the standpoint of perception, talo kayo (you lost): The government is weak. The government has not done anything to quell this unlawful activity. Presumption of good faith is already broken when somebody is already arrested for nondisclosure of money,” Gordon said. 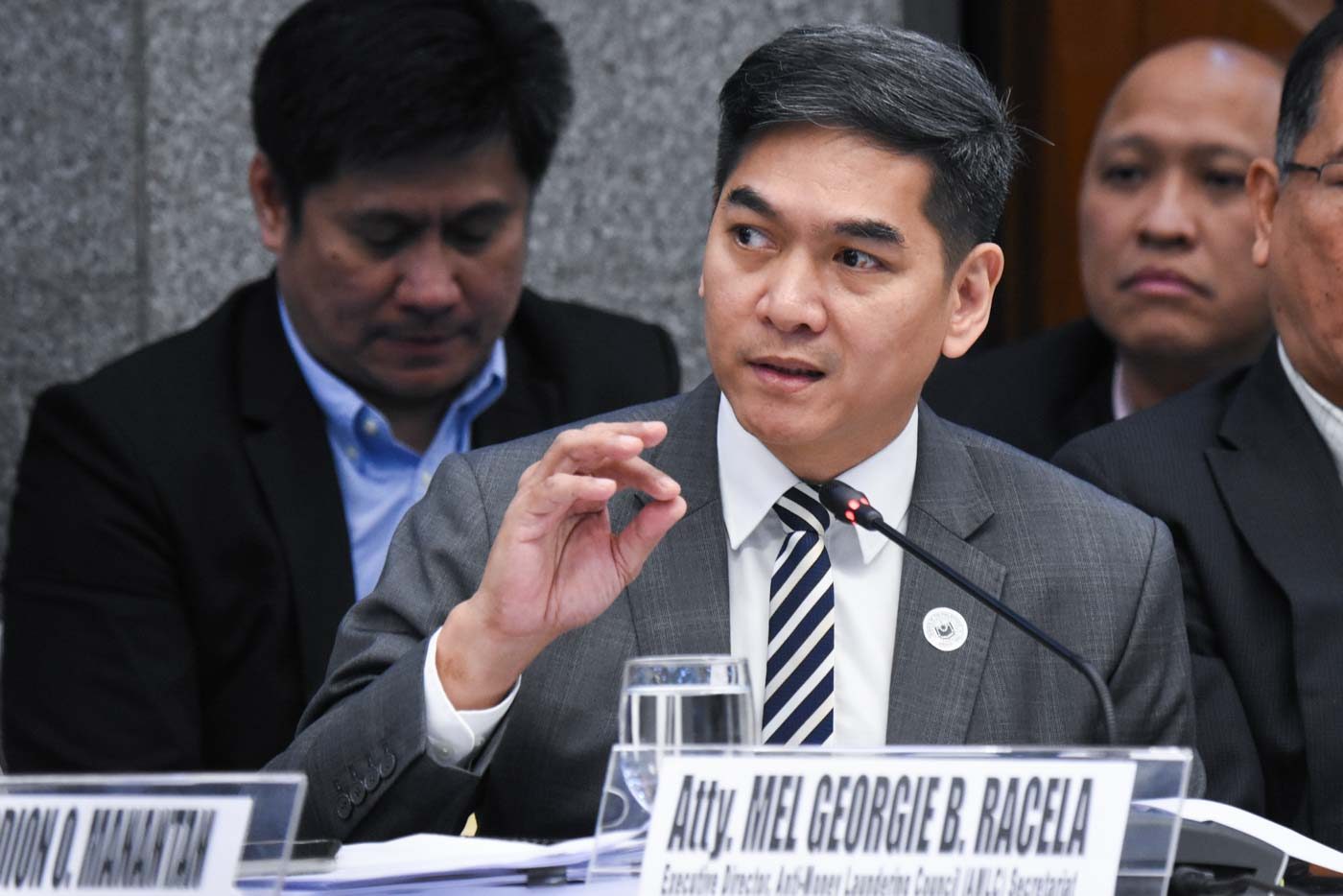 Why not file cases yet? Asked if it’s possible file a case against the Rodriguez group, Justice Undersecretary Markk Perete agreed. “It’s possible,” he said.

Of this sum, at least P14 billion were linked to suspicious activities, the AMLC chief said. The amount involves the following:

Still, Racela said that the law that created the AMLC puts the burden of proof on the government and not the alleged money launderer. Racela reiterated this as senators grilled him on why the AMLC acted so slow on the issue.

“Precisely the reason why we started our investigation in March of 2019 is because of the existence of suspicious circumstance,” Racela said.

“We need to establish, because the burden lies with the government to establish that these proceeds are proceeds of unlawful activities and the objectives of bringing that into the country is to launder it,” Racela added.

Gordon even floated the idea of applying the laws on smuggling on the bulk of cash, but Racela said that Customs tax is not levied on foreign currency.

Gordon said that he would take into account Racela’s statement on the gaps in the AMLC charter when he prepares the committee report on the probe.

“I want to see a strengthened and fortified implementation of the law,” Gordon said.

The next hearing will be on March 12.  The Senate blue ribbon committee subpoenaed the following members of the Rodriguez group to attend the next hearing:

Gordon also said during the hearing that the suspicious money could have been laundered through legal activities such as buying condominiums or winning in casinos. But the senator particularly took notice of a certain Emil Alfonso who brought in a total of $1.7 million this year.

“I have information that they have a branch in Marawi and the reason why it caught my attention is that you know mayroong foreign funding na pumasok doon sa Maute (there was foreign funding given to Maute),” Gordon speculated, referring to the local terror group that laid siege to Marawi in 2018.

The Bangko Sentral ng Pilipinas confirmed that Alfonso is affiliated with foreign exchange company Excellent Forex Corporation, but said that the firm had no declared branch in Marawi. – Rappler.com