Mar 5, 2020 9:48 PM PHT
Jun A. Malig
Facebook Twitter Copy URL
Copied
Wilson Castro Regala was in the 'frozen' status of the police force because of the numerous criminal cases he was facing, says a source in Camp Olivas 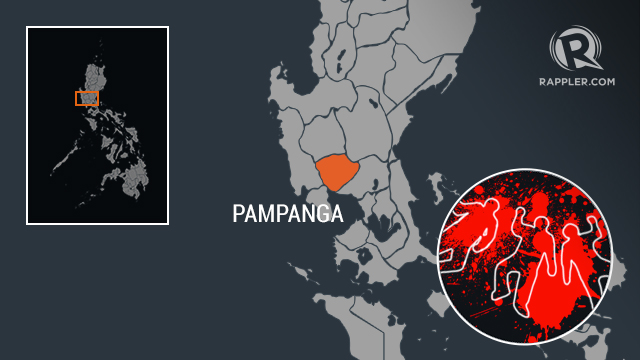 PAMPANGA, Philippines – A hot pursuit operation from the City of San Fernando to a nearby town before dawn Tuesday, March 3, resulted to the killing of 3 robbery suspects – a rogue policeman and his two cohorts.

The 3 men, who were on board a black Hyundai Accent car bearing plate No. AAW 9065, allegedly robbed a man in front of his residence in the City of San Fernando. The victim, who requested anonymity from the police, just came home from a cokpit arena when he was robbed at gunpoint.

Immediately after the suspects took the victim’s sling bag, which contained P10,000,  they headed towards Sto. Tomas town. The victim immediately reported the incident to the police and described the victims and their vehicle.

Recovered from Regala were a caliber .45 Colt pistol with 7 cartridges, different identification cards and his driver’s license.

From Caliuag, police recovered a caliber .45 Norinco pistol with 10 cartridges, assorted identification and other cards and a face mask.

The police seized Ellazo’s driver’s license and a mobile phone.

The website of the Philippine National Police said that Regala, who was formerly assigned at the Police Regional Office 3 Communications and Electronics Service in Camp Olivas here, was arrested by Tagaytay City cops for alleged carnapping in 2018.

A June 11, 2018 Facebook post by the PNP also stated the same, adding: “Upon verification, it was found out that PO2 Regala has pending cases also of carnapping at RTC Branch 80, Morong, Rizal and RTC Branch 11 in Malolos City, Bulacan.”

A source in Camp Olivas said Regala was transferred to Camp Crame after his arrest and was placed in a “frozen” status.

The Philippine Daily Inquirer reported in December 2015 that a stolen Isuzu closed van that belonged to a businessman was discovered “cannibalized” inside a warehouse in Lower Bicutan, Taguig City owned and managed by PO3 Wilson Castro Regala, who was then assigned at Camp Bagong Diwa.

The same report stated that Regala was detained by the Makati police in May 2013 for alleged car theft. He was assigned at the National Capital Regional Police Office at the time. – Rappler.com