Cayetano: ‘Congress is not here to comfort ABS-CBN’ 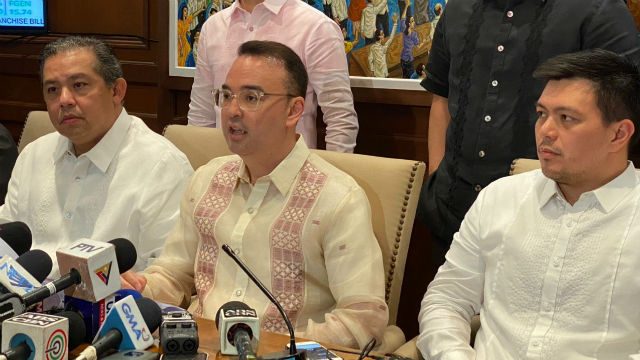 MANILA, Philippines – Speaker Alan Peter Cayetano thumbed down the proposal for the House to adopt a resolution expressing the sense of lawmakers that media network ABS-CBN should be allowed to continue operations, pending the renewal of its franchise.

This was the Speaker’s response on Tuesday, March 10, when asked to comment on National Telecommunications Commission (NTC) Commissioner Gamaliel Cordoba saying the provisional authority to operate it would grant to ABS-CBN would have a “more stable legal environment” if the House issues the resolution.

“These are all comfort letters eh. Congress is not here to comfort ABS or to comfort NTC. We are here to comfort the Filipino people in times of national crisis, ‘di ba? So problema, 100 milyon ang Pilipino, 100 milyon ang opinyon kung ano kailangan naming gawin para sa ABS (The problem is that there are 100 million Filipinos and 100 million opinions about what we should do about ABS-CBN),” a visibly irked Cayetano said.

The Speaker called for the press conference minutes after Cordoba told the House committee on legislative franchises the NTC would “most likely” grant ABS-CBN the provisional authority to operate while Congress is still deliberating on the bills renewing its franchise.

The NTC chief also cited Senate Resolution No. 40, which expressed the sense of the chamber that ABS-CBN should continue operations pending franchise renewal.

Cayetano maintained his position that the NTC’s temporary permit would be “sufficient” to ensure ABS-CBN would not need to close down by May 4, the expiration date of its franchise.

(You will not stop broadcasting. We’re not going to meddle with whatever you’re going to broadcast. So while I respect the opinions of everyone, the senators, DOJ, etcetera, I haven’t heard anyone saying ABS-CBN is in danger of closing down and that there is a reason to do so.)

The House held its first hearing on the ABS-CBN franchise renewal on Tuesday, but it lasted less than two hours as the hearing focused only on the NTC’s issuance of the temporary permit to operate.

Cayetano does not plan on scheduling a second hearing soon, since the 18th Congress is set to take a two-month break starting Saturday, March 14. Lawmakers will likely tackle the ABS-CBN franchise bills again in May or early August.

While Cayetano promises to give a “fair” hearing to ABS-CBN, it’s no secret that he has his own grudge against the network for supposed unfair election coverage in 2010 and 2016. – Rappler.com