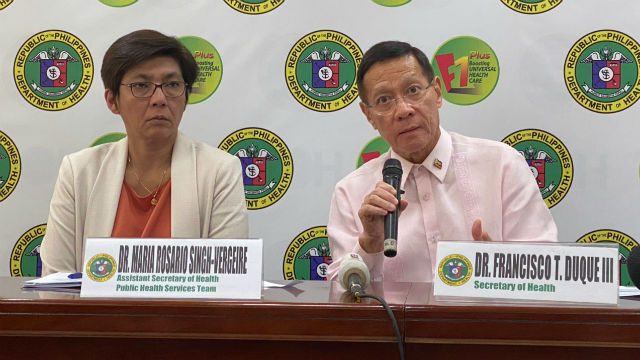 MANILA, Philippines (UPDATED) – The Department of Health (DOH) on Wednesday, March 11, confirmed 16 more positive cases of COVID-19, raising the total number of cases in the country to 49.

The DOH said they were now conducting extensive information-gathering and contact tracing activities on the new confirmed cases.

According to the DOH, they also have yet to determine if these were cases of community transmission.

(All the numbers and data are already up for contact tracing. We can already see the relationship of each case now.)

Meanwhile, Vergeire also said that the Research Institute for Tropical Medicine (RITM) at present has a capacity to perform 300 tests per day.

(We can still respond to requests for testing. We can still attend to testing requests. When we reach the point where cases continue to increase, we will mobilize our partnership with UPNIH. Also the testing kits have been locally produced to expand our laboratory’s capacity.)

The test kit developed by the University of the Philippines National Institutes of Health is capable of faster detection of the novel coronavirus in samples taken from patients.

The Food and Drug Administration (FDA) has already approved the UP test kit, but it needs to get the nod of the World Health Organization’s (WHO) “emergency use listing” before this can be rolled out.

The health department also reported that together with the Overseas Workers Welfare Administration (OWWA), they have  sent home 442 of the 445 repatriates from Japan who were quarantined at the New Clark City.

Of those 445 repatriates, two tested positive for COVID-19, the disease caused by the virus. The DOH said that rooms used by these patients were disinfected thoroughly.

“Close contacts of the 2 confirmed cases shall undergo additional 14-day home quarantine and will be continuously monitored by their respective municipal health offices,” the DOH added.

The DOH will release details of the new cases to media late Wednesday. – Rappler.com