Facebook Twitter Copy URL
Copied
The presidential aide-turned-politician says the fire victims were not crowding because of him, but because the evacuation center itself was already crowded

CEBU CITY, Philippines – Senator Bong Go distributed aid to more than 2,000 fire victims in a crowded evacuation center in Butuan City on Saturday, March 14, after he and President Duterte tested negative for the coronavirus disease (COVID-19).

Photos of the event, which took place at the Ong Yiu Central Elementary School, were posted on the Philippine Information Agency’s Facebook page on the day of Go’s visit.

Going around the country to hand out assistance to fire victims has been a regular activity of Go, even before the midterm elections in 2019, but the Butuan event stood out for Agusan Del Norte Representative Lawrence Fortun.

Fortun pointed out in a Facebook post on Sunday, March 15: “Was he [Go] not right beside the President when the latter read the IATF Resolution and tried to expound on each item on national television in the evening of March 12?”

Fortun was referring to Duterte’s televised announcement of a “lockdown”– later called a “community quarantine”– in Metro Manila to control the spread of the COVID-19, the disease caused by the coronavirus.

This announcement raised the country to subalert level 2, after Duterte declared a state of public health emergency last Sunday, March 8.

With Go beside him, Duterte appealed to the public to avoid public gatherings and practice social distancing, which health experts highly recommend to slow down the spread of the virus that has already infected 140 people in the Philippines and killed 11 of them. (READ: Coronavirus cases in Philippines rise to 140, with 11 deaths)

Worldwide, the coronavirus that originated from Wuhan, China has affected more than 124,000 people, resulting in over 5,500 deaths. 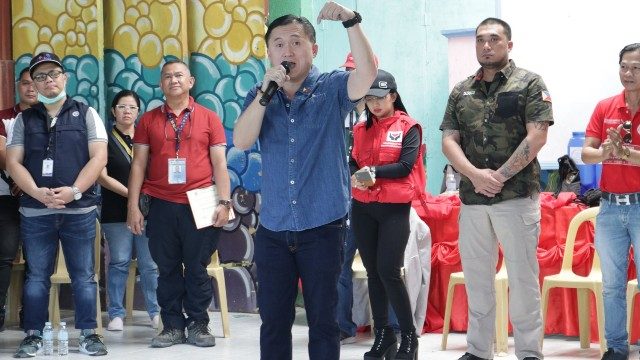 Duterte and Go underwent a COVID-19 test, despite not showing symptoms, as Cabinet officials came in close contact with a patient who had tested positive for the disease.

The former special assistant to the president said in a statement on his website that safety precautions were taken during his visit and that he followed social distancing.

“Gusto ko kayong yakapin, kaso maraming bawal na gawin ngayon dahil po sa COVID-19. Sundin po natin. Para rin sa kabutihan natin ito (I want to to hug you all, but there are a lot of things not allowed because of COVID-19. Let’s follow the rules. This is for the good of us all,” Go said. 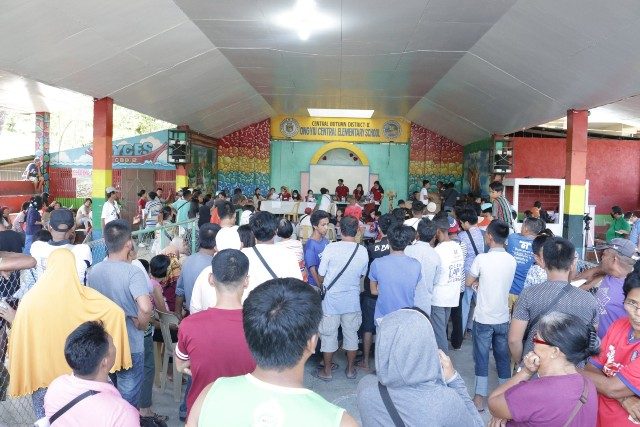 In a separate statement to Rappler, Go denied he organized a “mass gathering.”

“Given these events that transpired, I decided to go to Butuan City on March 14 — after my test results came out as negative and before the community quarantine officially took effect in Metro Manila,” Go said.

He clarified that even if his test results came back negative, he, along with other officials from Manila, maintained the 1-meter distance from each other and the crowds.

While Go may have kept his distance, beneficiaries at the gathering were seen crowding each other. Most were also not wearing masks.

The senator said that they were not crowding because of him, but because the evacuation center itself is crowded with people.

“I advised the local official and national agencies to make it easier to give the assistance, especially to those who lost their homes,” Go said in his statement in Filipino. “Because how can they practice ‘social distancing measures’ if they don’t have another place to live [in] but the evacuation center where they are crowding each other?”

There were 444 families, or 2,292 residents who lost their homes in a March 9 fire and received financial aid from Go.

The young victims staying at the evacuation center were also promised school uniforms and supplies.

While the IATF resolution only covers Metro Manila, other cities and provinces have taken precautionary measures and implemented more stringent entry and exit policies in their jurisdictions. These measures include social distancing, minimizing outdoor activities, and discouraging mass gatherings, among others. (READ: Governor Yap places Bohol under 5-day quarantine starting March 16)