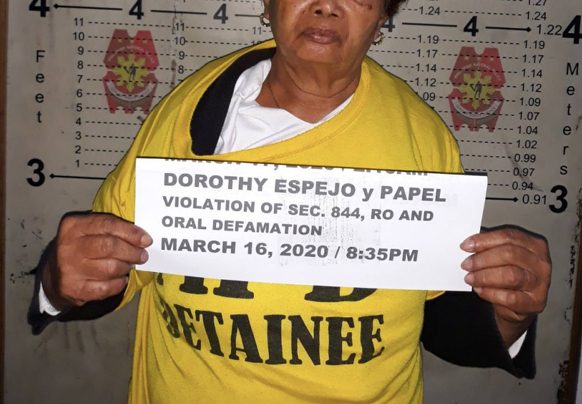 MANILA, Philippines – Manila Police arrested Monday night, March 16, a 69-year-old homeless woman after she supposedly shouted expletives at barangay officials who were roving in the area to disseminate information about the looming curfew in Manila.

Dorothy Espejo, jobless and who lives on the streets in Leveriza, Malate, faces 3 charges including violation of Article 151 of the Revised Penal Code prohibiting resistance and disobedience to authority, and punishable by a fine not exceeding P100,000 and imprisonment of up to 6 months.

The 8 pm to 5 am curfew over Manila will take effect on Thursday, March 19, but according to the Manila Police District, Espejo was grumpy when she was woken up by the roving tanods at 8:35 pm on Monday.

“Upon being disturbed of her sleep the suspect shouted at them and hurl them invective words,” said the Manila Police.

Manila police added: “The barangay tanods tried to pacify the suspect but to no avail, she instead went on creating havoc that disturbed the peace and tranquility of the neighborhood, hence her arrest and turn over to this station for filing of appropriate complaint at about 1:00 AM of March 17, 2020.”

Aside from resistance and disobedience, the Manila Police said Espejo will also face charges of breach of peace, which is in violation of Manila’s Revised Ordinance Section 844, and oral defamation.

She will be brought for inquest before city prosecutors of Manila. The Department of Justice (DOJ) did not suspend inquest proceedings during the Luzon lockdown.

Select courts are also open at daytime to give relief to those who may be apprehended during the lockdown.

Luzon has been put on lockdown to contain the spread of the coronavirus, with mass transport suspended, and mobility allowed only for essential workers, for buying food, medicine and other essential supplies.

The DOJ has said that those who violate terms of the lockdown can be arrested without a warrant even if they do not resist, citing the broad Republic Act 11332 which punishes “non-cooperation” with authorities in a public health emergency. – Rappler.com