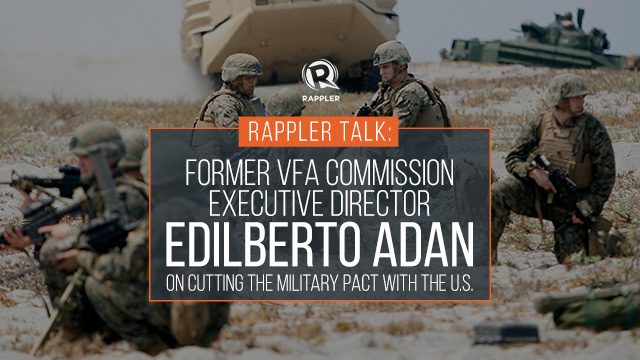 MANILA, Philippines – The Philippines is about to walk out of an agreement that allows the presence of US military troops on its soil. When President Rordigo Duterte officially ordered the repeal of the Visiting Forces Agreement (VFA) on February 11, it set off a 180-day countdown to the deal’s lapse, and the inevitable exit of American soldiers, sailors, marines, and airmen from the country.

Aside from the yearly Balikatan (shouder-to-shoulder) exercises that involve thousands of Filipino and US troops training together, the VFA paved the way for Philippine-US cooperation in disaster response and counterterrorism cooperation. It also outlined how American servicemen suspected of crimes are to be prosecuted, as in the cases of the US marines Daniel Smith and Joseph Scott Pemberton.

Many Philippine government officials and members of the military argued for the retention of the VFA, and yet there are people from the same quarters who welcomed its termination, saying the agreement was lopsided in favor of the US.

On one hand, experts say the VFA has served as a deterrent against foreign aggression toward the Philippines. On the other hand, critics believe US military presence serves as a magnet for foreign attacks on Philippine soil.

What to make of this? Rappler speaks to retired Lieutenant General Edilberto Adan, who served as the Executive Director of the VFA Commission from 2007 to 2014. From his vantage point of overseeing joint military exercsies and witnessing how the Pemberton murder-turned-homicide case unfolded, Adan gives a comprehensive assessment of the VFA, and its place in the treaty alliance between the Philippines and the United States.

Bookmark this page to watch the interview at 4:30 pm. – Rappler.com