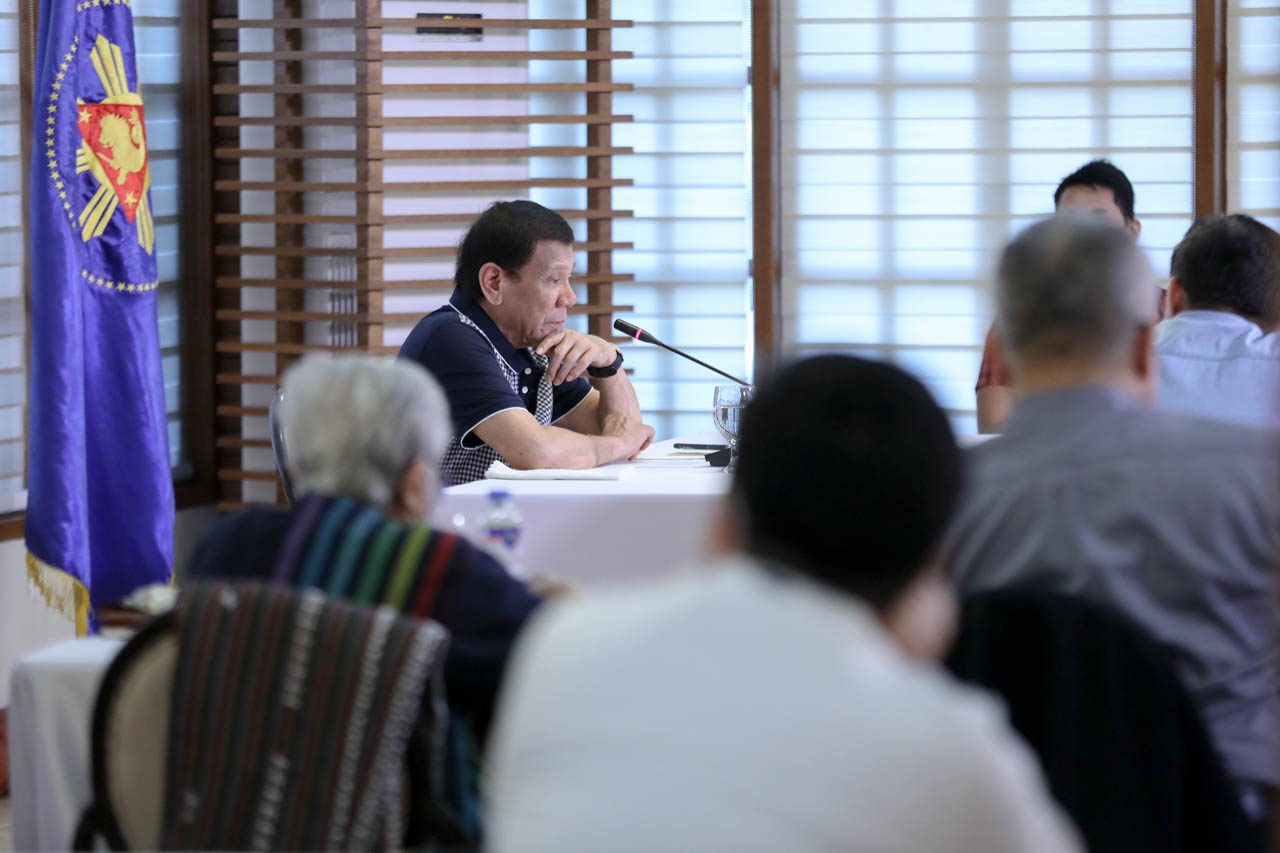 Facebook Twitter Copy URL
Copied
'Our enemy is the novel coronavirus, not one another,' says Cabinet Secretary Karlo Nograles as he reiterated the President's order to strictly follow the national government's lockdown guidelines

MANILA, Philippines – President Rodrigo Duterte’s reminder to local executives to enforce the coronavirus lockdown in Luzon was not aimed at anyone in particular, members of the Cabinet said on Friday, March 20, as they reiterated and clarified some of the measure’s guidelines.

“Everyone is reminded. We’re not pinpointing an individual LGU (local government unit) or person. These are the guidelines of the President intended for all LGUs,” said Interior Secretary Eduardo Año at a media briefing in Malacañang in response to questions.

“Let’s make this clear ha (alright)? Let’s not start this ball rolling of identifying LGUs. Alam ko (I know) where this is going…. Let’s not fall into that, okay?” added Cabinet Secretary Karlo Nograles.

(Let’s help one another out. No more of this, ‘Which LGU is that?’ We’re pointing fingers now. That’s not healthy anymore. Please…this is a general directive of the President so everybody, just follow. No more intrigues on this or that. Bro, our enemy here is COVID-19. We’re not enemies here, alright?)

Earlier on Friday, at around 1 am, Malacañang streamed a prerecorded video of Duterte telling local governments to “stand down” and enforce the “enhanced community quarantine” in their constituencies only according to the guidelines set by the national Inter-Agency Task Force (IATF) on Emerging Infectious Diseases.

Duterte did not single out any mayor, city, or municipality, but the address followed a much-publicized plea from Pasig Mayor Vico Sotto that the national government allow tricycles to continue servicing people exempted from the lockdown – health workers, employees of essential businesses, and people traveling for medical reasons.

The lockdown includes a total ban on public transportation, which Sotto reasoned would result in even more deaths, based on the Pasig government’s risk assessment.

Sotto initially allowed tricycles to take limited trips in Pasig on the first two days of the lockdown, but Nograles on Wednesday ruled it out, and Sotto said Pasig would comply with the total ban.

Still, Duterte scolded local governments, which he said were implementing the lockdown “according to their own interpretation,” and threatened to file administrative and even criminal cases against local executives who would not follow the IATF’s guidelines to the letter.

On Wednesday and Thursday, as the controversy between Pasig and the national government over tricycles drew public attention, #ProtectVico trended on Twitter and other social media platforms as people rallied behind the mayor whom they said was only trying to do his job well.

At Friday’s briefing, Año talked about other “variations” among local governments’ enforcement of the lockdown: some locales were hampering the passage of cargo trucks including those carrying medicines and other vital items, and some checkpoints barred stranded travelers who were just heading home.

Año said the cargo trucks and the stranded travelers should have been allowed passage.

The entire island of Luzon with its population of more than 57 million is set to be on lockdown until April 12, but Metro Manila will remain so until April 14. The measure is meant to contain the outbreak of the novel coronavirus.

The Philippines has had 217 confirmed cases of the virus , 17 deaths, and 8 recoveries.

Across the globe, more than 217,500 people have contracted the disease. More than 9,000 people have died of it, as the virus hit 157 countries. – Rappler.com