Facebook Twitter Copy URL
Copied
The COVID-19 battleground is not just about hospitals, but also about the poorest communities that lack the means to feed and protect themselves. Protecting these communities means protecting everyone else

MANILA, Philippines – The coronavirus outbreak cannot be handled without making an effort to address the issues of poverty, mobility, and food security among the poorest and the neediest, according to a report by UrbanisMO, a group of urban planners and development professionals, in cooperation with the Philippine Center for Investigative Journalism (PCIJ).

The report was released on Wednesday, March 25. As of Thursday, health officials said the number of coronavirus cases in the Philippines has soared to 707.

According to UrbanisMO and PCIJ, the contagion is likely to spread and worsen despite the government’s moves to contain the pandemic, specifically imposing a lockdown and shutting down business and transport. Here are their findings:

1. The number of coronavirus cases is estimated to increase to 26,000 by the end of March, based on projections by the Asian Institute of Management. There are not enough doctors and nurses to handle the projected surge, especially since most health workers work in the private healthcare system that only caters to a third of the population.

2. Based on global estimates, 3 to 5% of coronavirus patients need mechanical ventilation. However, a Philippine College of Physicians survey revealed that there are only 1,572 ventilators available in the country, with 423 in Metro Manila.

Factoring in the country’s shortage of health workers, its insufficient number of ventilators, and the full capacity of multiple hospitals, it becomes very important to keep people at home to keep the infection growth rate down to levels that the health system can absorb.

This map illustrates the poorest areas of the metropolis (the darker the color, the larger the percentage of poverty in the area) as well as their proximity to hospitals and coronavirus cases. 4. Poor living conditions trigger various overcrowding and hygiene-related health issues, leading to greater risk of infection, particularly for the elderly and the young.

Quezon City, which has the highest number of cases, has over a third of the total slums in the capital region. It is also the country’s largest and most populous city with a population of over 2.9 million people. Daily-wage-dependent families in these slums have insufficient access to water or soap, and do not have the luxury of space. 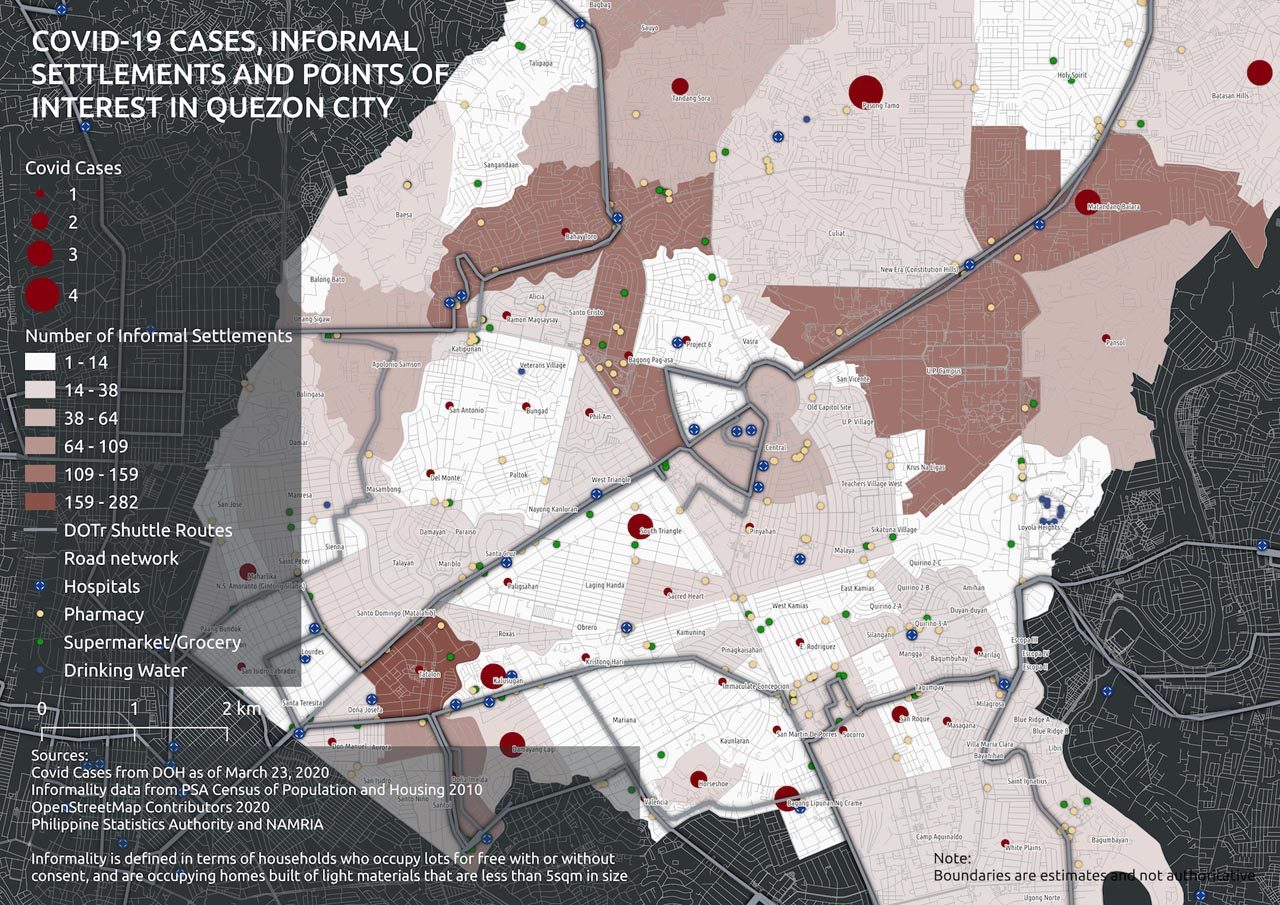 5. The lack of transport could endanger the food supply. Produce deliveries may be unable to enter the capital and markets may not operate at full capacity due to the inability of their workers to come to work.

Farmers also warn that thousands of tons of produce are going to waste because of the transport restrictions and the lack of markets that will purchase the food.

Initiatives by private citizens, such as donations, fundraisers, information drives, and the government’s distribution of food packs, among others, will not be enough to keep poor families afloat under the enhanced community quarantine, the report noted.

“The COVID-19 battleground, therefore, is not just hospitals, but the poorest communities that lack the means to feed and protect themselves. Protecting these communities means protecting everyone else,” the report said.

Since mobility is restricted throughout the lockdown, the report said that all efforts must be hyper-localized. This means building on human resources and social capital within affected local government units in the following months.

As the national government’s executive branch gained enhanced powers in an effort to stem the coronavirus outbreak, it needs to work with local governments, the private sector, and everyday citizens.

The report gave 9 recommendations on how to address the issues of poverty and density, and access to health, sanitation, mobility, and food security:

1. Increase community access to water and sanitation. In order for poor families to practice frequent handwashing and proper sanitation, water shortages and the lack of basic supplies must be addressed.

UrbanisMO and PCIJ recommended organizing water rationing, as well as installing sinks and handwashing stations in strategic common areas. Further, supplies such as soap, hygiene kits, and masks must be provided to those living in dense and informal settlements.

2. Provide financial support to poor families. Out of Metro Manila’s nearly 13 million population, around 2.5 million live in slums and 3.1 million are homeless.

Social welfare programs must be expanded to aid the displaced labor force, the marginalized, and other vulnerable sectors.

The following programs must be implemented, expanded, and augmented:

3. Ensure food security during the enhanced community quarantine. Even though the national government stated that the delivery of food, agricultural products, and essential commodities will not be barred, it has not been clearly applied in all local government units, the PCIJ report read.

Local government units must, therefore, come up with innovative ways to maintain the people’s access to food. Some examples cited by the PCIJ report include Pasig City and Lanao del Sur’s mobile markets, Mandaluyong City’s inclusion of fruits and vegetables in their food packs, and Baguio and Laguna’s distribution of vegetable seeds for “survival gardens.”

4. Ensure that daily wage earners are not forced to leave home just so they can feed their families. Food aid and other incentives must be given to workers, through the collaboration of the government and private sector employers.

5. Support the mobility of front line services and health workers. While bus services have been offered by the government, the PCIJ report said that many frontline workers have no access to “last-mile” transportation that may transport them from their pick-up or destination all the way to their houses. Thus, they are still forced to walk to work.

Citizens in need of health services should still have unimpeded access to health facilities even without having private vehicles. For example, mobility must be ensured for those who are pregnant, undergoing dialysis or radiation, and are in need of other essential health services.

The PCIJ report suggested options like sanitized buses and bicycles for front line workers and temporary housing in coordination with real estate developers, schools, and dormitories.

Further, checkpoint protocol implementation must be done in a humane, respectful, and non-arbitrary process, “putting [the] health and safety of citizens first.”

6. Support the health sector and local scientists in ramping up free testing capability across the country, including the poor. Given the country’s insufficient laboratory facilities and trained personnel, a portion of the Department of Finance’s P27.1-billion package should be allocated towards addressing testing and its logistics.

7. Share accurate and timely information at the national and grassroots level, in local languages and channels. Communication channels should be consolidated for clear messaging and information dissemination. Existing communication platforms like the government’s text alarms may also be utilized to provide more useful information instead of brief regular reminders.

8. Encourage businesses to support these efforts and create a streamlined response with the government.

9. Extend the deadline of tax collection. Banks, businesses, and property owners must be called on to extend and/or defer bill and rental payment deadlines. – Rappler.com

Both the English and Tagalog versions of the paper are available on urbanismo.ph.