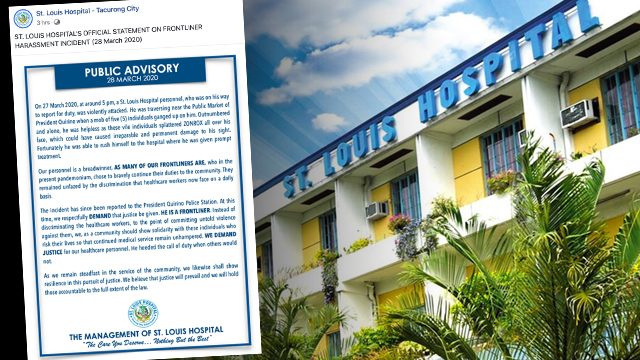 Facebook Twitter Copy URL
Copied
The St. Louis Hospital utility worker was passing by the public market when he was attacked by 5 individuals

MANILA, Philippines – St. Louis Hospital in Tacurong City, Sultan Kudarat condemned the harassment experienced by one of its utility workers on Friday, March 27. (Editor’s note: We previously identified the hospital personnel as a nurse. We apologize for the error.)

According to the hospital’s Facebook post, the utility worker was passing by the public market when he was attacked by 5 individuals.

“Outnumbered and alone, he was helpless as these vile individuals splattered Zonrox (bleach) all over his face,” the statement said, adding that the crime could have resulted in irreparable and permanent damage to his sight.

Fortunately, the utility worker immediately headed to the hospital and was given prompt treatment. The case was then reported to the President Quirino Police Station.

The hospital emphasized the important role frontline health workers play in helping arrest the spike of coronavirus cases in the Philippines. (READ: Left in the dark: Little protection for government’s coronavirus frontliners)

“He is a frontliner. Instead of discriminating health care workers to the point of commiting untold violence against them, we as a community should show solidarity with these individuals who risk their lives so that continued medical service remains unhampered,” it said.

The Sultan Kudarat incident is just one of the cases of discrimination reported against medical workers and hospital staff.

Amid calls for support for those in the front line, a lot of them have come forward to share instances of discrimination – from being shunned by local stores to being evicted from their boarding houses. (READ: Frontliners in a bind: Health workers fined P5,000 for backriding)

As the ones interacting directly with patients who could have the coronavirus, doctors and nurses are at a higher risk of getting sick themselves. This is the reason many groups focus on providing much-needed personal protective equipment for frontliners. – Rappler.com

(Editor’s note: We previously identified the hospital personnel as a nurse. We apologize for the error.)