Mar 31, 2020 5:06 PM PHT
Lian Buan
Facebook Twitter Copy URL
Copied
Her son, who was also arrested the same day for allegedly trying to stop the police from taking the teacher, remains in jail 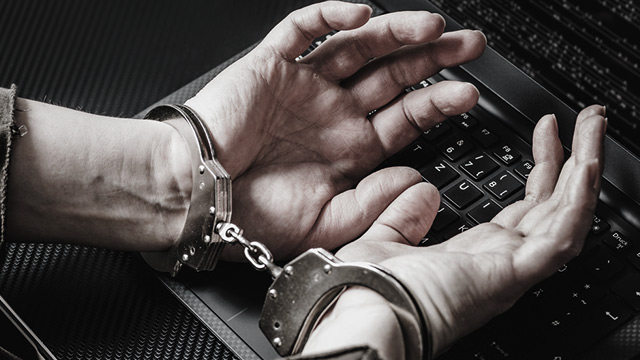 MANILA, Philippines – The 55-year-old public school teacher arrested without warrant in General Santos City for an allegedly seditious post on Facebook was taken to the hospital due to hypertension, her lawyer Luz Ramos told Rappler on Tuesday, March 31.

Juliet Espinosa was arrested Friday, March 27, after posting on Facebook under a pseudonym that people were going hungry as General Santos City is placed under community quarantine over coronavirus, and that they should raid their local gym where relief goods are stocked.

“Ma’am Juliet is confined at the hospital due to hypertension. She is a bit ok now, but blood pressure still erratic,” Ramos told Rappler.

Espinosa was taken to the hospital early morning Saturday, March 28. She is not released yet, pending a preliminary investigation of the complaints.

Inciting to sedition is defined as “seditious words or speeches, write, publish, or circulate scurrilous libels against the Republic of the Philippines or any of the duly constituted authorities thereof, or which tend to disturb or obstruct any lawful officer in executing the functions of his office, or which tend to instigate others to cabal and meet together for unlawful purposes, or which suggest or incite people against the lawful authorities or to disturb the peace of the community, the safety and order of the Government, or who shall knowingly conceal such evil practices.”

(Many people will die of hunger if we don’t report to the President that our mayor is incompetent. I call on those who have nothing to eat to raid the Lagao Gym. The food packs meant for you are piled up there.)

(Her main phrase, I can’t see an element of sedition there, because what she put focus on was food, she didn’t say revolt against the government.)

Espinosa’s son Jyzhear Eli, 33 years old and also a teacher, was arrested too for supposedly trying to stop the cops from taking her mother on Friday. He is being charged of violation of Article 151 of the Revised Penal Code which punishes disobedience and resistance to authority.

Eli is still in jail as of writing.

According to Ramos, Eli asked the arresting cops to let her mother change into more decent clothes before they take her. Elijah also asked that he be allowed to contact a lawyer first.

(Juliet was only wearing a sleeveless top, so Eli asked if his Mama can change in the room first, but that irritated the cops. Eli was also filming the situation, and Eli asked if he can call a lawyer, that’s when the cops got mad.)

The Philippine National Police (PNP) Soccsksargen (Region 12)  Cybercrime Unit said that because the post was still live on Facebook, it will count as a continuing crime and falls under a warrantless arrest.

This follows an earlier ruling by the Department of Justice (DOJ) that upheld as valid the warrantless arrest of web administrator Rodel Jayme for helping upload the Bikoy “Ang Totoong Narcolist” videos.

Ramos said she requested that a formal preliminary investigation be conducted.

“(We were) given 10 days to file our counter-affidavits,” said Ramos.

Meanwhile, Ramos said she will file petitions for bail for both Juliet and Eli.

The Supreme Court has already allowed courts to receive petitions via electronic means, and even electronic postings of bail.

The DOJ earlier said that for violators of lockdown, if the prosecutor opens a preliminary investigation, the accused shall be released meanwhile, even without filing a petition for bail before the court.

But because General Santos City is not covered by the Enhanced Community Quarantine (ECQ), which is only over Luzon per the national task force, Justice Undersecretary Markk Perete said the policy will not apply in this case.

“The procedure we discussed applies to areas covered by ECQ,” Perete told Rappler.

Several groups have slammed the arrest of the Espinosas, calling it a “pretext for crackdown on dissent.” (READ: Bayanihan Act’s sanction vs ‘false’ info the ‘most dangerous’)

The Bayanihan Act, which gave President Rodrigo Duterte special powers to address the problems of coronavirus, punishes the spreading of false and alarming information. – Rappler.com