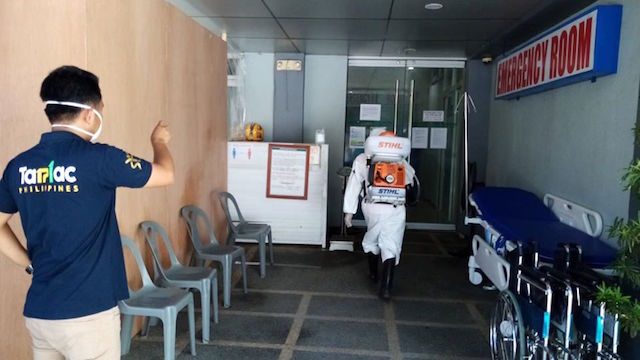 Cases rose as the country’s capacity to test samples for the disease improve following the accreditation of sub-national laboratories around the country.

The government previously relied only on the Research Institute for Tropical Medicine.

Tarlac: New cases in their 20s

Tarlac Governor Susan Yap confirmed 6 new cases in the province the last 24 hours. She posted updates on the provincial government’s Facebook page as results came in.

The two new cases had previous contact with a positive coronavirus case.

Tarlac recorded 132 persons under investigation (PUIs) who exhibited severe symptoms and 289 other PUIs with mild symptoms.

The province also recorded 17,494 people under monitoring for the disease.

In adjacent province Pampanga, cases rose to 20 on Thursday. Five have died.

The provincial government said the newest cases included one each from the cities of Angeles, Mabalacat, and San Fernando. There were two in Candaba town and one each in the towns of Lubao and Mexico.

As cases rise, Pampanga residents demanded more transparency from the government. They wanted officials to identify the barangays where the confirmed cases live and name the hospitals that admitted them.

In Mabalacat City, netizens slammed how the local government seemed to have shut down its Facebook page just when the people needed information about the city’s first confirmed cases.

They also demanded updates on the test results of 9 PUIs.

(Editor’s Note: We earlier reported netizens wanted an update on the test results of 29 PUIs. There are only 9 PUIs  waiting for the results of their coronavirus tests. We apologize for the error.) There are fears the sudden rise in cases in the city are linked to a crowded cockfight match held at the Matina Gallera from March 6 to 13.

Davao City’s cases were not identified but the spike came after Duterte warned attendees that the event promoter suddenly died from pneumonia, a possible indication of coronavirus infection.

Duterte said she is prepared to impose even stricter measures including declaring an extensive enhanced community quarantine if coronavirus continues to spread in the city.

“But hopefully, this will not push through,” she said.

Cebu City recorded 21 cases, accounting for most of the cases in the province. Lapu-Lapu City and Mandaue City have two cases each. Talisay City and the towns of Consolacion and Cordova have one case each.

Department of Health Region 7 director Jaime Bernadas said the lab results show the virus has “not spread far into the province,” adding that cities and municipalties with positive cases are part of Metro Cebu.

Doubts were cast on his analysis, however.

In La Union, the cases rose to 12 on Thursday. Two of the new cases were recorded from San Fernando, the first cases to be reported from the capital city.

“Both are from the City of San Fernando: one belonging to the age group of 60 to 69 years old, and the other to the 40 to 49 years age group,” said Governor Francisco Emmanuel Ortega III.

Accordingly, both are in stable condition, with one recovering at the Lorma Medical Center adn the other at the Ilocos Training and Regional Medical Center,” he said.

Out of the provinces 12 cases, 7 are admitted in hospitals, 2 are in strict home quarantine, while 3 have died. – with a report from Ryan Macasero/Rappler.com