MANILA, Philippines – A campus journalist from the University of the East (UE) was allegedly forced to issue a public apology on Sunday, April 5, after he wrote a Facebook post criticizing the government’s efforts in handling the coronavirus pandemic in the country.

Joshua Molo, editor-in-chief of the Dawn, drew the ire of 3 of his former teachers from Cabiao National High School in Cabiao, Nueva Ecija.

The post in question has since been taken down, but Molo said he raised the “inaction” of the Duterte administration.

His teachers engaged in a discussion with Molo, commenting on his post. They expressed support for President Rodrigo Duterte. 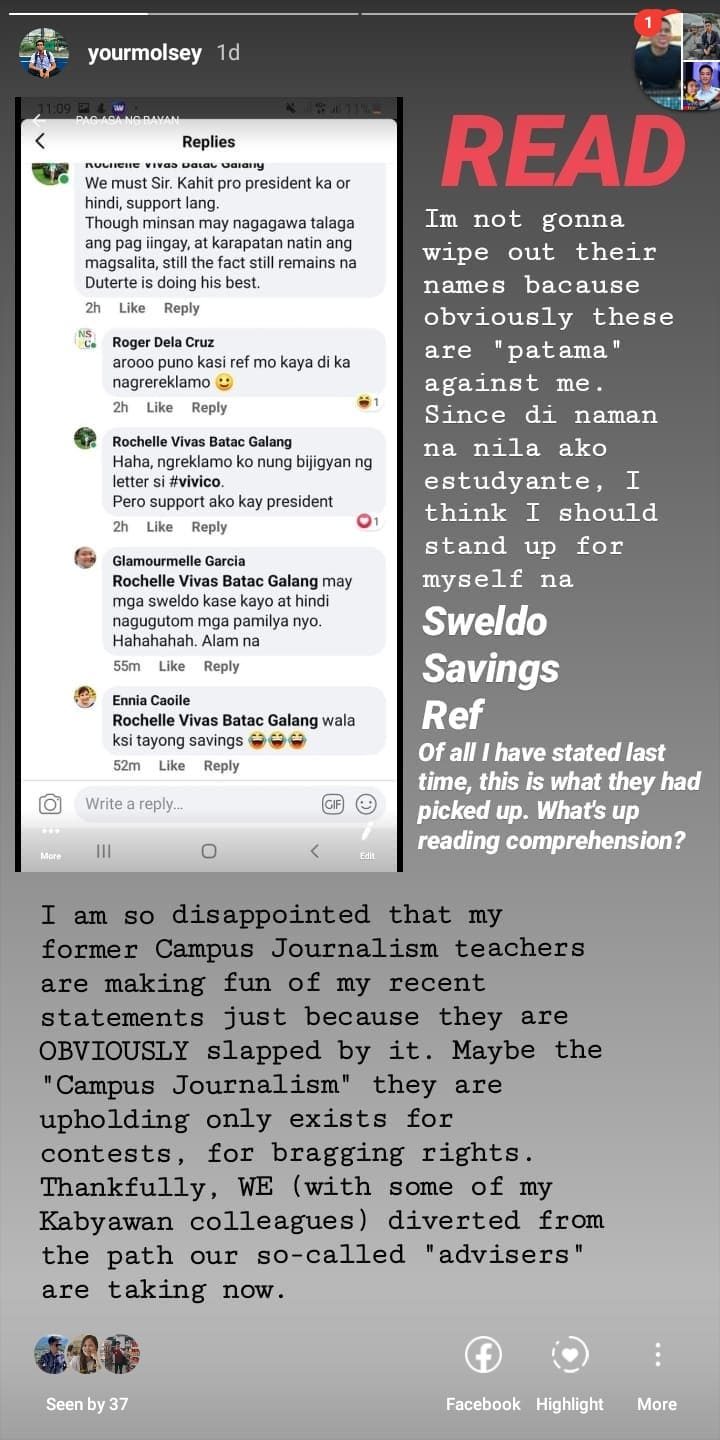 According to human rights group Karapatan, this reportedly prompted the teachers to file a complaint against their former student at the barangay level, for allegedly posting libelous remarks online.

At around 12 pm on Sunday, Molo was summoned by officials of Barangay San Fernando Sur in Cabiao for mediation following the filing of the complaint.

During the mediation meeting, according to Molo, one of the teachers threatened to pursue the cyber libel case against him unless he would issue a public apology.

Molo also told Karapatan that he was given an option to voluntarily sign a waiver that he would not post sentiments critical of the government again. He was supposedly told to issue a public apology as well, or face arrest and detention.

Knowing he would not be able to afford a legal battle, Molo opted to apologize in public and waive his right to free speech.

At 1:50 pm on Sunday, Molo posted a video to apologize for “misusing” his social media accounts. He addressed his apology to the teachers, as well as the advisers and members of Kabyawan, the student publication of Cabiao National High School.

In the video, Molo can be seen reading a message from his phone.

(As a student and citizen, I believe that development can be achieved in many ways. It’s possible that one’s belief can be different, but that doesn’t mean it’s wrong. I admit that I made a mistake, and it won’t happen again.)

However, the video was later deleted early Sunday evening.

“Before removing the video, the campus journalist posted a comment saying a former teacher had asked him to take it down,” said the National Union of Journalists of the Philippines.

According to Karapatan, Molo said barangay officials told him he would be arrested by police if he continues posting views that are unfavorable to the Duterte administration.

Several student organizations and media watchdogs have denounced the incident, with the College Editors Guild of the Philippines (CEGP) calling it a “blatant suppression [of] people’s democratic rights.”

Reporters Without Borders said the harassment of a student journalist to the point of having to renounce his right to freedom of expression is “absolutely intolerable.”

“Forcing dissidents to make public apologies is the prerogative of totalitarian regimes. That this practice is taking place in the Philippines today speaks volumes about the current state of democracy in this country under President Duterte,” said Daniel Bastard, the head of Reporters Without Borders’ Asia-Pacific desk.

The National Union of Students of the Philippines-Metro Manila, meanwhile, said Molo’s case is an offense to “everyone’s constitutional right to criticize the systems being ran in this country.”

The CEGP urged the government to direct its attention to stopping the pandemic, rather than silencing opinions on social media.

“Instead of filing nonsensical criminal charges, the government should work on improving a coordinated and sustained public information campaign and immediately deliver economic assistance and services to everyone,” said CEGP national president Daryl Angelo Baybado. – Rappler.com