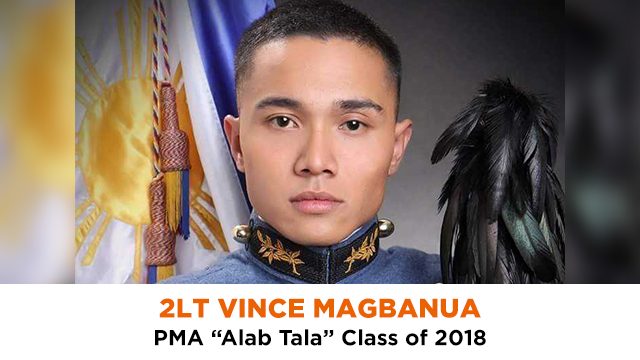 Facebook Twitter Copy URL
Copied
Army 2Lt Vince Magbanua is a member of Philippine Military Academy Class of 2018. 'He is looked up to by his superiors, peers and subordinates for his dedication, commitment, and idealism,' says the military

MANILA, Philippines – A young graduate of the Philippine Military Academy (PMA) died from respiratory disease on Wednesday, April 8, prompting his commanders to check if he contracted the novel coronavirus disease and to take precautions in the camp.

Army 2nd Lieutenant Vince Magbanua was a member of PMA Class of 2018. He was a native of Davao City assigned in Bulacan as weapons platoon leader of the 48th Infantry Battalion under the 7th Infantry Division.

Northern Luzon Command chief Lieutenant General Ramiro Rey he expected his samples will be sent to the Research Institute for Tropical Medicine (RITM) on Thursday.

“We hope it’s not coronavirus but the 7th Infantry Division commander has ordered contact tracing for troops he might have interacted with for quarantine and monitoring,” said Rey.

The Armed Forces of the Philippines issued a statement to condole with Magbanua’s family and friends.

“It is with great sadness that we mourn the death of one of our young and promising officers, Army 2nd Lieutenant Vince Magbanua at 3:40 pm yesterday, April 8. He was declared dead on arrival at Norzagaray Municipal Hospital where he was rushed on complaint of  severe difficulty in breathing,” said military spokesperson Brigadier General Edgard Arevalo.

“He is looked up to by his superiors, peers and subordinates for his dedication, commitment, and idealism,” Arevalo said.

Arevalo said Magbanua was rushed to the same hospital on Tuesday after he complained he had difficulty breathing. He was diagnosed with acute bronchitis and sent home with medicines and advice to isolate himself in the barracks. – Carmela Fonbuena/Rappler