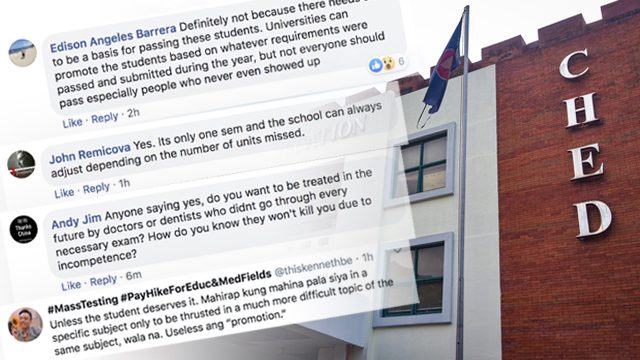 MANILA, Philippines – Filipinos were divided when the Commission on Higher Education (CHED) said it would be up to universities and colleges to decide whether to implement mass promotion of students during the coronavirus pandemic.

CHED also said on Tuesday, April 14 that colleges and universities were free to adjust their respective academic calendars.

Since the Luzon lockdown was extended until the end of April, universities have responded differently in adjusting their schedules for academic year 2019-2020. (READ: Students urge suspension of online classes during coronavirus lockdown)

The University of the Philippines (UP) president’s advisory council recommended to the school’s Board of Regents (BOR) to end the second semester of the academic year on April 30.

The OSR will be releasing a statement soon. Continue amplifying our collective voice! pic.twitter.com/CcY2lV8Ajc

Many netizens urged universities to implement mass promotion in a move to prioritize the safety and welfare of students. Others said universities could always make the necessary adjustments after the lockdown, and that the current situation was not conducive for learning.

If mass promotion means giving a fairly passing grade after the semester then yes, they all deserve it because sino ba namang estudyante ang makakapagfocus sa studies in the middle of a pandemic? What if nagka-COVID yung estudyante, acads parin ang nasa isip nya ganon? https://t.co/wc540gEcQx

However, other Filipinos were on the fence about the issue, arguing that mass promotion would unjustly pass undeserving students, and would leave students unequipped.

Unless the student deserves it. Mahirap kung mahina pala siya in a specific subject only to be thrusted in a much more difficult topic of the same subject, wala na. Useless ang “promotion.” https://t.co/Tr4PJyZ533

Schools should set a policy/standard if none is in place. Deserving students can be automatically promoted while others should undergo additional study requirements of some form.

The Philippines recorded 5,223 coronavirus cases, with 335 deaths and 295 recoveries as of Tuesday, April 14.

What are your thoughts on this issue? – Rappler.com