Winston Ragos’ mom to Duterte gov’t: Coronavirus is the enemy, not my son 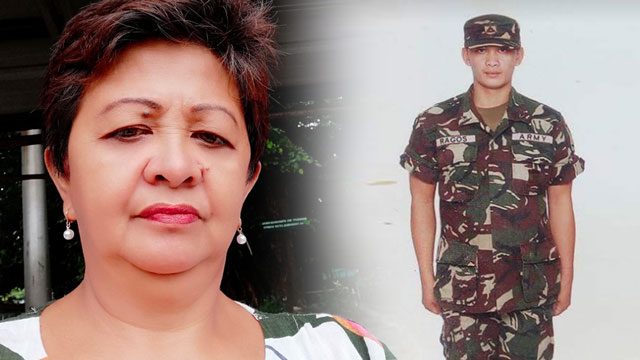 Facebook Twitter Copy URL
Copied
Merlyn Ragos says despite her son's struggles with his mental health, he was kind to his family and would even lend the pension money he received from the military to relatives

MANILA, Philippines – “The virus is the enemy, not my son.”

This is the message of Winston Ragos’ mother to the Duterte government, two days after a cop killed her son in Quezon City for supposedly breaking quarantine rules and allegedly trying to pull out a gun from his bag.

(They should investigate it well; look at it closely. I woudn’t have any complaint if they can prove that my son resisted or if he hurt anyone, or if he deserved to die. I hope they open their eyes: our focus is nCov now. The person they killed is not a drug addict, not a pusher, or anything else. The enemy now is nCov.)

The novel coronavirus used to be referred to as nCov.

Police Master Sergeant Daniel Florendo Jr killed Winston on Tuesday afternoon, 3 weeks after President Rodrigo Duterte gave cops a “shoot them dead” order in addressing unruly quarantine violators. The Philippine National Police (PNP), while launching a probe against Florendo, had insisted that it was the cop’s judgment call to shoot Winston twice, which eventually led to his death.

Was it justified? Merlyn believed that the cops, who clearly outnumbered his son and all had guns, mismanaged the situation.

“Marami pang pagkakataon na puwede nilang lumpuhin kung anuman…. At saka ‘yung 5 pulis na ‘yun may baril. Pagkatalikod pa lang puwede na ‘yun dakmain eh…. Puwede niyang tirahin sa paa (There were a lot of opportunities to just disable him or something…. And those 5 cops had guns. When he turned around, they should have grabbed him…. They could have just shot him in the leg),” Ragos said.

She noted that residents who were in the area had shouted to the cops that her son was mentally challenged and unarmed.

A video of the incident obtained by Rappler showed Florendo shouting at Winston, telling him to yield. Winston raised his arms and turned his back. But Ragos double backed to face Florendo while reaching for something in his sling bag. Police said that Ragos was about to pull out a pistol in the bag.

According to the Philippine National Police’s manual on operational procedures, in the event of a confrontation with an armed offender, cops should only apply “necessary and reasonable force to overcome resistance put up by the offender; subdue the clear and imminent danger posed by him; or to justify the force/act under the principles of self-defense, defense of relative, or defense of stranger.”

This has taken on a new meaning under the Duterte administration, specifically since the beginning of the anti-drug campaign, where cops have been told to “neutralize” suspects who threaten their lives. This could mean disabling the suspects, or in less ideal situations, killing them.

A mother’s doubts: Merlyn believed that cops planted the gun in Winston’s bag. She said the bag only contained a water bottle and documents proving that he was not mentally stable. Winston  suffered from schizophrenia and trauma, she said, after serving in the Philippine Army until January 2017.

This is part of the police investigation.

She added that Winston was flagged by the military for his trauma since 2012, after being assigned to the mountainous areas of Camarines Norte with the 31st Infantry Batallion and the 9th Infantry Division.

(How can we say that he got a gun? Who would be crazy enough here – even if he’s your son, nephew, or  cousin who is mentally unstable – will you let him hold a gun? Get a gun? Buy a gun?)

Despite his struggles with his mental health, Winston was still kind to his family, Merlyn said. He would even lend pension money he got from the military to his relatives, and always wanted their family to be together. His only vices, she said, were “Coke and cigarettes.”

Merlyn said this was the reason that her son encountered the cops in the first place: He ate lunch and wanted his Coke and smoke fix, so he came down with his sling bag, and was mistaken for a threat by cops in broad daylight. – Rappler.com