Apr 25, 2020 3:24 PM PHT
Lian Buan
Facebook Twitter Copy URL
Copied
There are 241 coronavirus patients in prisons nationwide, and one of them – a Bilibid inmate – has died 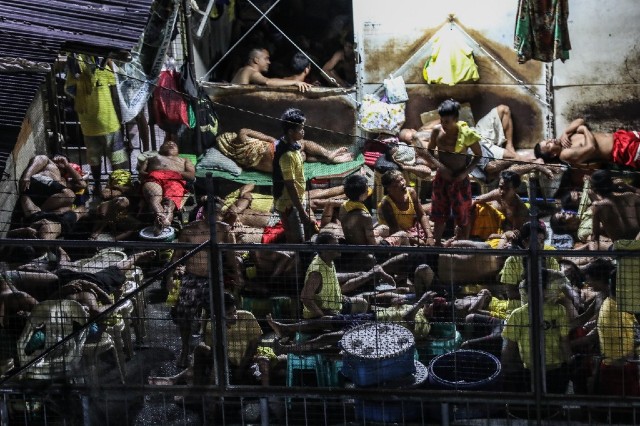 MANILA, Philippines – Solicitor General Jose Calida is blocking the petition to release on humanitarian grounds sickly, elderly and low-risk prisoners, saying that the congestion of Philippine jails “is not among the grounds to release inmates.”

“While it is true that some of the detention and reformatory facilities in the country are highly congested, unfortunately, congestion in prison facilities is not among the grounds to release inmates,” Calida said in the comment submitted by the Office of the Solicitor General (OSG) to the Supreme Court on Friday, April 24.

The Supreme Court is deliberating on a petition filed by sickly and elderly political prisoners to release them and all of the thousand others similarly-situated prisoners as as the threat of a coronavirus outbreak loom in Philippine jails.

“The issue of the inadequacy of the Philippine prison system to meet the very high standard of international rules does not warrant the release of prisoners,” Calida said, asking the Supreme Court to dismiss the petition.

Earlier, the House Justice Committee as well as the Bureau of Jail and Management Penology (BJMP) have expressed support to granting temporary releases to eligible prisoners as a means to decongest jails. (READ: ‘TAKOT NA TAKOT KAMI’ While government stalls, coronavirus breaks into PH jails)

The petition asks for releases on bail.

Calida, as ordered by the Supreme Court, listed down all the government efforts to protect jails from the coronavirus, such as suspending visitations, disinfections and building isolation facilities.

“The petitioners have not shown any complacency on the part of the State,” Calida said, saying that the recent moves of the Supreme Court and the Department of Justice (DOJ) to release prisoners on existing guidelines prove that the government “had already adopted measures to decongest detention facilities.”

As of Saturday, April 25, there were 241 confirmed cases of coronavirus in prisons nationwide; one of them – a Bilibid inmate – has died.

The Bilibid inmate died while confined at the Research Institute for Tropical Medicine (RITM).

Calida also said that prisoners have better access to medical resources if they stay in jail.

“The issue for the Court’s resolution can be narrowed down to whether the State can provide medical care to the petitioners while maintaining their confinement vis-a-vis the threat of COVID-19,” said Calida.

“Plainly, the petitioners’ continued detention affords them ready access to government resources if and when the dreaded virus reaches the doors of their cells, no less different outside their cells,” Calida added.

The New Bilibid Prison, which has a 337% congestion rate, is now classified at critical level because of severe lack of medical resources that has resulted in an average of 1 prisoner dying every day.

The petition was filed by 22 political prisoners, 21 of them still undergoing trial and one of them already convicted and serving sentence at the CIW where 21 prisoners have tested positive.

But the petition asks the Supreme Court to release others similarly situated, meaning the sick, elderly and low-risk prisoners.

With the subversion law repealed, it is not illegal to be a member of the CPP.

Calida said the political prisoners are flight risk, which is why they do not deserve the application of the Enrile doctrine, or the humanitarian grounds by which the Supreme Court granted bail to former senator Juan Ponce Enrile who is on trial for the non-bailable case of plunder.

“There are no humanitarian considerations involved, but merely opportunistic legalism to distort established judicial processes,” said Calida, adding that to free the political prisoners accused of murder would be an injustice to the family of those who died.

Calida also said the political prisoners must not be given special treatment as they do not have a valid distinction with the thousand other prisoners.

But in the same petition, Calida said: “The petitioners have not justified the grant of provisional liberty to the thousands of similarly situated detainees.” – Rappler.com