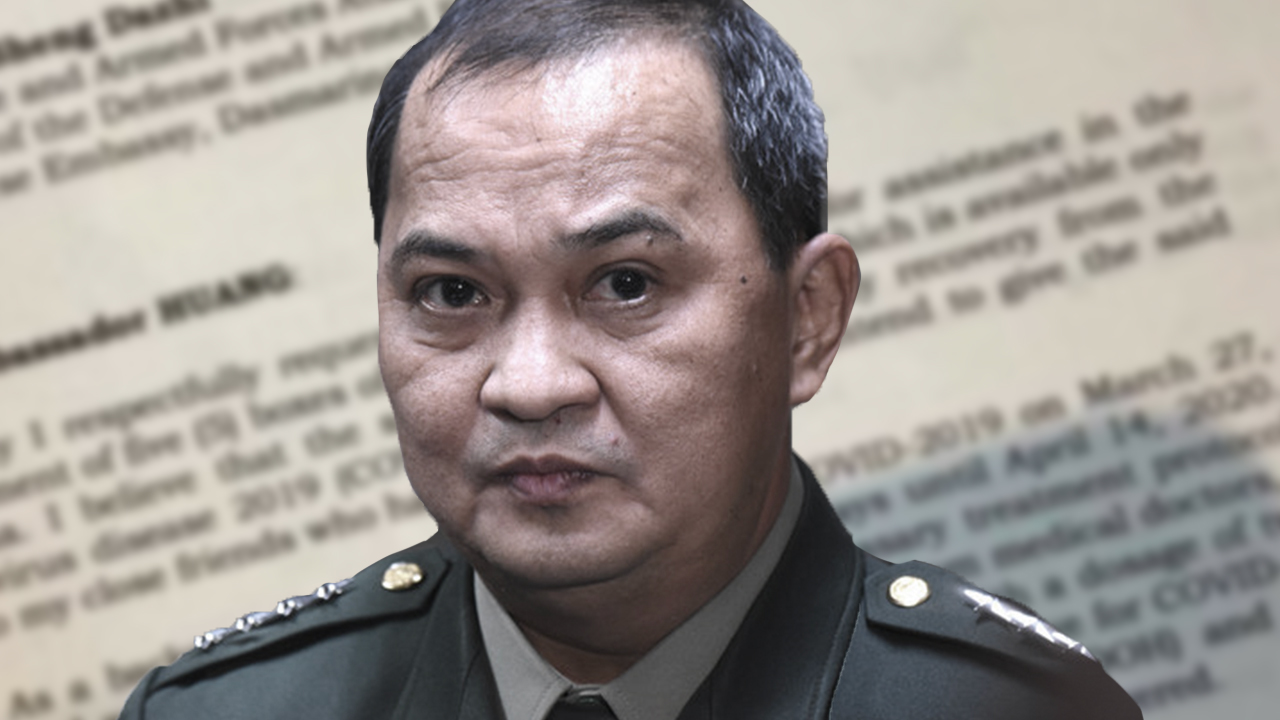 MANILA, Philippines – The chief of the Armed Forces of the Philippines (AFP), General Felimon Santos Jr, admitted asking the Chinese ambassador in Manila for help to procure an off-label drug used to treat the symptoms of COVID-19. But he said he “recalled” his request when he found out the drug has not been approved for coronavirus patients.

Santos had taken the drug himself when he contracted COVID-19.

This is what Santos told Rappler on Monday night, April 27, after ABS-CBN tweeted a photo of a letter he wrote to Chinese Ambassador to the Philippines Huang Xilian. The military chief did not deny the letter’s authenticity.

Rappler obtained a similar photo of the letter from a source; it bears no date.

In the letter, Santos requested the envoy’s “assistance in the procurement of 5 boxes of Carrimycin tablets which is available only in China.”

“I believe that the said medicine helped in my recovery from the coronavirus disease 2019 (COVID-19) infection and I intend to give the said drug to my close friends who have also been infected,” Santos wrote.

Santos tested positive for the novel coronavirus on March 27, and stayed in quarantine at his residence in Camp Agunaldo, the AFP General Headquarters in Quezon City. He said he did not have symptoms.

He was tested again and the results that came out on April 5 were negative, and the AFP issued a statement that Santos had recovered from the disease.

“With clearance from medical doctors, I took Carrimycin tablets given to me by a Chinese friend with a dosage of two tablets for 6 days,” Santos wrote Huang.

Santos did not deny sending the “personal” letter, but he told Rappler he “recalled” it when he learned that Carrimycin has not been approved for use to treat COVID-19.

(A friend gave me [the tablets]. Just wanted to know if it was available in the market. That should have been personal but I recalled that as there was no approval yet [of the drug].)

“Pero meron na daw nag-apply (But someone’s already applying [for the approval]),” added Santos, who again insisted, “Personal sana ‘yan (That should have been personal).”

The letter in the photo, however, bore Santos’ letterhead as AFP chief of staff.

Rappler clarified with Santos whether he would still send the letter to the Chinese ambassador. “Negative na,” he replied.

“My intention is to know also if it is really being used in China and to assist others,” the military chief added.

Despite China’s apparent efforts to aid the Philippines’ response to the coronavirus pandemic with donations of medical supplies and equipment, it has continued actions that assert control and dominance over the West Philippine Sea.

It recently opened new research stations on reefs it reclaimed and turned into military bases, and created new political districts claiming all of the Spratly Islands, including the Philippines’ Kalayaan Island Group (KIG), as part of its Hainan province.

On February 17, a Chinese warship targeted the Philippine naval vessel BRP Conrado Yap as it was on patrol in the KIG area near Palawan.

The Department of Foreign Affairs on April 22 lodged diplomatic protests with the Chinese embassy in Manila over Beijing’s naming of the KIG as part of Hainan, and the incident involving the BRP Conrado Yap.

Besides these, China has consistently undermined the Philippines’ sovereign rights in the West Philippine Sea, defying the landmark July 2016 ruling by an international arbitral tribunal that affirmed the Philippines’ position and debunked China’s sweeping “9-dash line” claim of ownership over almost the entire waterway. – Rappler.com