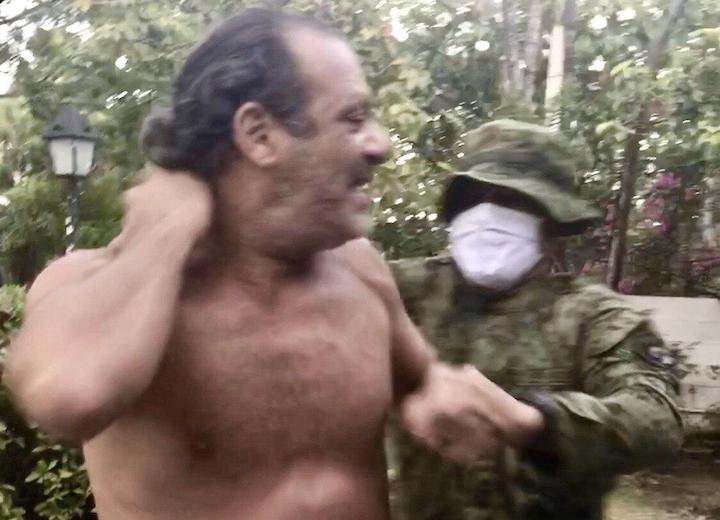 MANILA, Philippines – Philippine National Police (PNP) chief General Archie Gamboa said the Makati police had to use force to subdue Makati village resident Javier Salvador Parra, whom he described as much bigger than the cop who tried to arrest him.

On Tuesday, April 28, Gamboa defended why Senior Master Sergeant Roland Von Madrona had to tackle Parra to the ground when the policeman attempted to arrest the Spanish citizen living in the posh Dasmariñas Village in Makati City for allegedly violating quarantine rules.

The PNP’s top leader was asked by a reporter during a virtual meeting of the House Defeat COVID-19 committee to comment if it were necessary for Madrona to use force in trying to apprehend Parra, who is said to be suffering from a preexisting spinal injury.

“Nakita ‘nyo naman siguro, your honors, kung gaano kalaki ‘yung foreigner compared sa policeman (Your honors, you probably saw how bulky the foreigner was compared to the policeman). So really, it will depend [on the situation],” Gamboa said during the question and answer portion of the virtual meeting.

Madrona and Parra had a violent and highly publicized encounter on Sunday afternoon, April 26, after the law enforcer tried to fine Parra P1,000 for supposedly allowing his helper to water plants without wearing a face mask.

“He did everything by the book. In the case of our police officer, Police Senior Master Sergeant Madrona, he did his job well and ipaglalaban ko ‘yan kahit mababang ranggo ng pulis, ipaglalaban natin ‘yan (I would defend him even if he is a low-ranking police officer),” Año told GMA News.

“They were on the street, and he (Madrona) was already doing the arrest…in front of the house. It’s allowed by the law, it’s called hot pursuit, even if the guy went inside the house, if you’re arresting somebody, you’re allowed by law,” he added.

Police have since filed a complaint against Parra, accusing him of unjust vexation, direct assault, disobedience to authority, failure to follow a Makati ordinance requiring the use of a face mask in public, and violation of Republic Act No. 11332 or the Mandatory Reporting of Notifiable Diseases and Health Events of Public Health Concern Act.

Parra, however, is also preparing to sue the cops for alleged abuse.

Makati City Mayor Abby Binay earlier ordered police to investigate the incident and said appropriate charges would be filed against those found to be accountable.

The Dasmariñas Village scuffle is the latest in a series of reported incidents of alleged police abuse. On April 19, cops barged into the Pacific Plaza Towers in Taguig City and were seen acting aggressively to enforce quarantine guidelines. Retired Supreme Court associate justice Antonio Carpio said policemen in the Taguig incident violated the law for entering without a court-issued warrant. – Rappler.com