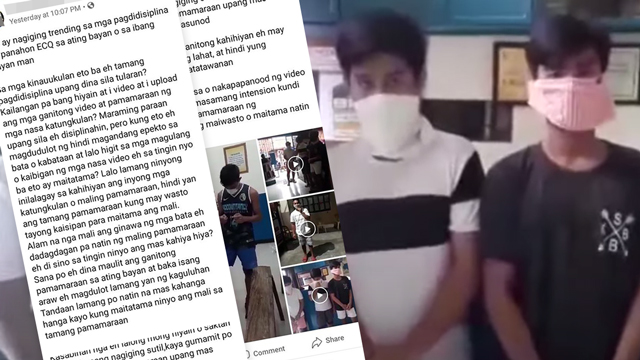 A police chief allegedly ordered supposed quarantine violators in Liliw, Laguna to reenact their offenses while being video recorded.

Two out of 3 of the videos Rappler obtained appeared to depict minors. The people in the videos were made to state their names, ages, their offense, and then told to proceed to act out their quarantine violations. Concerned citizens have been sharing the videos in community group chats. It was unclear when the incidents took place.

One video showed 3 minors who were apprehended for picking mangoes from a tree. Another video showed a person who was caught flying a kite. In a third video, a pair of boys who appeared to be teenagers pretended to play an online game together with imaginary phones.

Behind the camera, someone was ordering them to act, pushing them to put on a better performance if they lacked “feelings.”

Concerned citizens Tony and Gabriel, not their real names, told Rappler they circulated the videos because they knew what was happening was wrong. Tony believed the person recording the videos and whose voice could be heard giving commands was Raymund Osea, a police station commander in Liliw, Laguna.

One of the videos showed the map of Liliw in the background. The videos appeared to have been filmed in a police station.

Rappler reached out to Osea, but he has not given his comment as of posting. Police staff acknowledged receipt of Rappler’s message for relay to the chief. We will update this story when we receive Osea’s comment.

Gabriel, a Liliw native, posted the videos on his Facebook profile after receiving them in a group chat. He said he did not know that the police chief was behind the camera, only that he wanted to raise awareness on the unjust treatment. 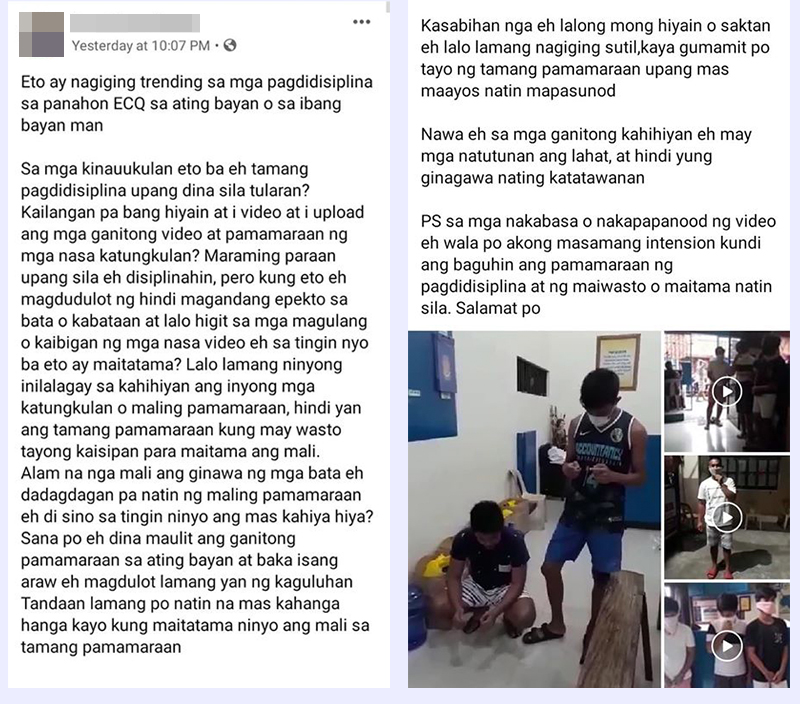 Even if the post itself did not mention any person responsible or locality involved, he took down his post two days later after his siblings told him to. They told Gabriel they recognized the voice to be Osea’s, and that posting the videos could land him in trouble.

(I was hurt by their way of discipline. I did not have bad intentions in uploading the videos. For me, I hope that this wouldn’t happen again, especially for simple offenses where they could be easily resolved or explained by the kids. Especially here, they’re minors.)

On April 13, Tony sent the videos and another report of minors detained at the station to the Ateneo Human Rights Center (AHRC) for action.

“Everybody knows na boses ni hepe at si hepe ang nag-video (Everybody knows it was the chief’s voice and it was him who took the videos),” said Tony.

The AHRC advised Tony to bring the cases to the municipal social welfare office (MSWO) of Liliw. They also asked if they could forward the reports to the Commission on Human Rights (CHR), to which Tony agreed.

The CHR endorsed the concern to CHR Calabarzon for investigation.

“AHRC later on found out from the concerned citizen that the earlier reported detained minors have been released due to the report to the MSWO and CHR,” said Arpee Santiago, executive director of AHRC.

AHCR denounced what happened in the videos.

“The ‘punishment’ or treatment of the minors was uncalled for. The duty of the police officers is to turn over the minors to the MSWO. There is no need to impose and such treatment or punishment on their part since such is to humiliate the minors if not to just assert power over them,” said Santiago.

Santiago said it was a “sad reality” that concerned citizens like Gabriel who took to social media to call out such behavior are afraid of possible retaliation.

“In order to protect but as well encourage citizens to be vigilant, I advise them to properly report possible abuses directly to concerned authorities, non-governmental organizations (NGOs) or institutions that can help, and the media. This will also protect concerned citizens from possible undue retaliation or harassment,” said Santiago.

What should be done? Santiago said that the Philippine National Police (PNP) leadership and Department of Interior and Local Government (DILG) should investigate the videos and impose sanctions as needed.

“Only with proper accountability can we ensure compliance with the law among those who should be implementing it properly. This can fall under the administrative liability of the persons involved,” said Santiago.

The minors, as represented by their legal guardians, could also opt to file for criminal charges for possible child abuse. The CHR could also independently investigate the matter.

The videos of the minors are part of a string of reports of human rights abuses related to coronavirus pandemic lockdowns. On April 5, a barangay captain in Pampanga made LGBTQ+ quarantine violators do lewd acts in front of a minor as punishment.

Former soldier Winston Ragos was killed for violating quarantine rules, while a man in a private subdivision was assaulted and nearly arrested by Makati police.