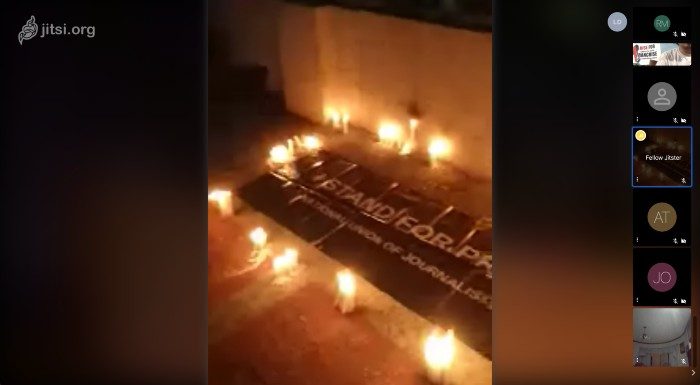 Facebook Twitter Copy URL
Copied
'Even as our people battle a deadly pandemic, it carries out an underhanded assault on freedom of the press and of expression,' NUJP says in a statement

MANILA, Philippines – At a time when the government is calling on the public to “heal as one,” it comes as an irony that the National Telecommunications Commission ordered the closure of ABS-CBN.

This is what National Union of Journalists in the Philippines (NUJP) said in the online candle-lighting they organized on Tuesday, May 5.

Since late January, the group has been organizing a series of protests to show support for the franchise renewal of ABS-CBN. In fact, it has gathered thousands of signatures from supporters who are standing with ABS-CBN which they submitted to the Congress as a show of force.

Just as they did in when they launched their signature campaign, the group has renewed its call for the public and journalists to “stand together and resist the government’s brazen assault on freedom of the press and of expression.”

The National Telecommunications Commission (NTC) issued a cease and desist order against media giant ABS-CBN on Tuesday, May 5, just two days after newsrooms around the globe celebrated World Press Freedom Day.  In its order, the NTC directed the network to halt television and radio broadcasting operations.

NUJP also questioned the timing in which the NTC ordered the closure of ABS-CBN. The group urged the giant network to resist the order.

“Even as our people battle a deadly pandemic, it carries out an underhanded assault on freedom of the press and of expression,” NUJP said in its statement.

They highlighted the role of news organizations during this time to help fight disinformation. As the largest news company in the Philippines, they acknowledged the blow this move makes in the overall effort of the country to fight the pandemic.

(In the middle of a pandemic, the government should treat media and the largest media network of the Philippines as a partner in delivering reliable information to the public) – Rappler.com