Calida: Blame Congress, not me, for off-the-air ABS-CBN

May 6, 2020 1:29 PM PHT
Lian Buan
Facebook Twitter Copy URL
Copied
'Why hasn’t Congress acted on it? Who is at fault here?' says Solicitor General Jose Calida the morning after a cease and desist order silences the Philippine broadcast behemoth 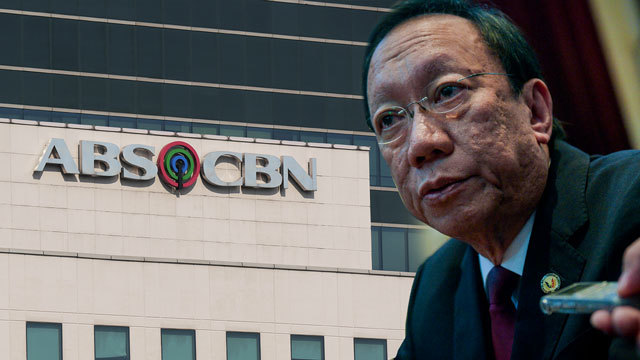 MANILA, Philippines – As Filipinos woke up to a day seeing a black screen on television instead of the free ABS-CBN Channel 2, the first time since martial law, Solicitor General Jose Calida blamed the situation at Congress which has yet to renew the station’s franchise.

Calida had filed a quo warranto petition to revoke the previous franchise of ABS-CBN, which expired May 4, and had warned the National Telecommunications Commission (NTC) against issuing a provisional permit. The NTC followed Calida and served a cease and desist order for ABS-CBN to stop broadcasting Tuesday, May 5.

“The bill renewing ABS-CBN’s franchise has been pending in Congress since 2016. The question we should be asking is, why hasn’t Congress acted on it? Who is at fault here?” Calida said in a statement to reporters Wednesday, May 6.

Calida reiterated that the NTC has no power to issue a provisional permit to a broadcasting company which no longer has a valid franchise. This opinion is supported by a 2003 Supreme Court decision that says the only legal basis for a broadcaster to continue operating is a Congress-issued franchise.

But the Congress rested on NTC assurances that it will allow ABS-CBN to provisionally air. The NTC, at the time, had taken Justice Secretary Menardo Guevarra’s advice that the principle of equity requires that a broadcaster which had previously enjoyed a franchise may continue airing while the renewal is ongoing.

Guevarra is standing firm on that opinion, even as Calida maintains the justice secretary is wrong, continuing a web of clash among Cabinet men in a polarizing issue of shutting down what has been a dominant source of information and entertainment for Filipinos for the last 4 decades.

“The exercise by the NTC of its regulatory power is in accordance with the principle of the rule of law. Nobody is sacred. Even a powerful and influential corporation must follow the law,” said Calida.

“Without a valid and subsisting franchise from Congress, the NTC cannot allow any broadcasting entity from operating in the country,” the solicitor general added.

As of writing, House Speaker Alan Peter Cayetano has not issued a statement yet.

In December 2019, President Rodrigo Duterte said he “will see to it” that ABS-CBN will not be given a new franchise. – Rappler.com