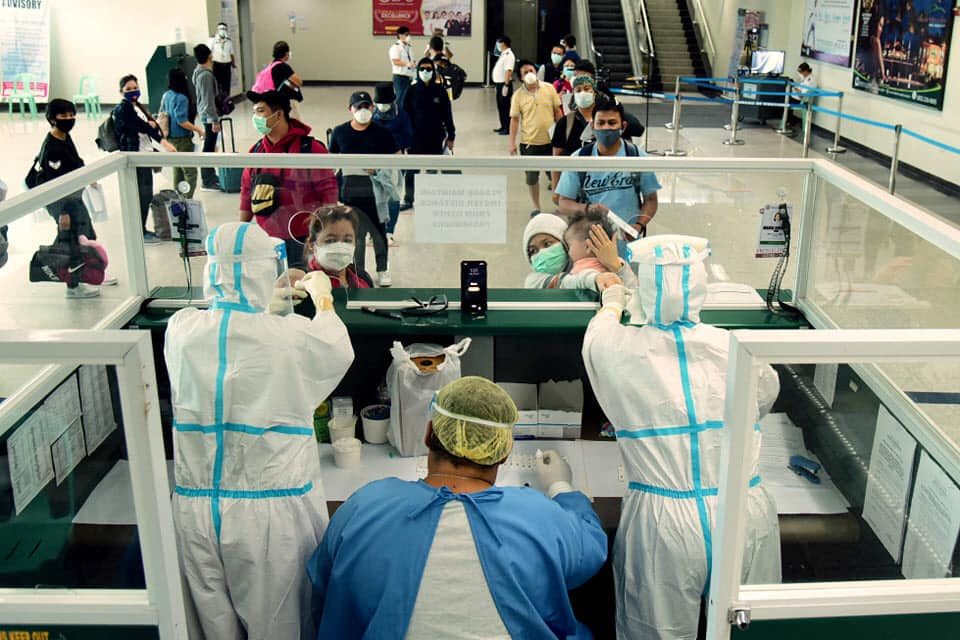 DAVAO CITY, Philippines (UPDATED) – Officials in various Davao region provinces have begun locating more than 100 people who were on the May 6 Manila-Davao City sweeper flight after Mayor Sara Duterte confirmed that one of the passengers had tested positive for the coronavirus disease.

In a statement on Saturday, May 9, Duterte said that the passenger, whose details were not immediately provided, is now at a COVID-19 quarantine center in Davao City.

Duterte said that all the passengers from the flight underwent the health screening procedure at the Davao City International Airport.

One of them failed the screening procedure and had to undergo a swab test, which later showed the passenger was positive for COVID-19 based on the result released by the Southern Philippines Medical Center (SPMC).

“The City Health Office shall undertake to call all those who were seated in the plane near this individual [to] come in for further screening. We remind all the passengers of the May 6 flight from Manila, if they develop symptoms within 14 days to go to SPMC for assessment. We emphasize to the family members of those who recently arrived to avoid direct physical contact with them,” Duterte said.

Duterte said that those on the sweeper flight can be easily identified because they have indelible ink marks on their left index finger.

“If you see anyone with this mark, please do not go near them for the next 14-21 days,” she said.

Duterte said that the matter will be raised with the national government in a bid to prohibit the boarding of individuals on sweeper flights if they have no health clearance confirming they are negative for the coronavirus based on Reverse transcription polymerase chain reaction (RT-PCR) test results.

On April 27, Duterte had announced that Davao City residents who were stranded in other parts of the country would not be allowed to return to the city yet, upon advise of epidiomologists, to avoid “a new wave” of infections.

A few days later, the stranded residents were allowed back to Davao City. The city government issued requirements for those who were traveling back using private vehicles.

On Monday, May 4, a sweeper flight with 120 stranded residents arrived in Davao City from Clark.

The May 6 sweeper flight from Manila had 270 passengers.

In Davao de Oro, provincial health officer Antonio Ybiernas Jr. said that there were two passengers from the May 6 sweeper flight now in the province. They had been put under quarantine in an isolation facility since their arrival.

“They tested negative in the rapid testing, and as of now, have not shown any symptoms of COVID-19,” he said.

In Davao del Norte, the Sto. Tomas town government said in a statement that 5 residents who were on the same sweeper flight were placed under a strict 14-day quarantine at a facility in Tagum City managed by the provincial government.

It added that one of the returning resident’s family failed to strictly follow the protocol imposed upon arrival, including having to isolate themselves.

The town’s COVID-19 task force learned that a family member made direct contact with one of them on May 6 despite repeated reminders not to breach protocols.

“They are really challenging the national government’s law and our local protocols on COVID-19. We will not hesitate to pursue and exhaust all legal means for those who keep on insisting and breaching the protocols,” the Santo Tomas government added.

In Davao del Sur, provincial health officer Jonna Masongsong said that the 7 Digos City residents who were on the said sweeper flight, as well as the passengers from Matanao and Magsaysay towns are being located.

In Digos City, Mayor Josef Cagas sharply reacted to reports the 7 residents who flew to Davao City from Manila on May 6 were still being located.

In a Facebook post, Cagas said the 7 passengers were immediately put into isolation upon their arrival in Digos City.

“As per established protocol, these Digos bound passengers were immediately isolated from the time they arrived in Digos. At no instance that these passengers were given the opportunity to expose themselves in public especially in Digos City. From the airport to isolation, the seven were closely guarded and monitored,” he said.

Masongsong’s statement that the 7 individuals were still being located triggered an alarm among residents of Digos City, with many of them taking to social media to question why they were apparently not taken to a government isolation facility.

As of Friday, May 8, Davao City has a total 144 coronavirus cases that include the active cases, patients who have recovered, and those who have succumbed to the disease.