May 11, 2020 9:57 PM PHT
Sofia Virtudes
Facebook Twitter Copy URL
Copied
Resolution No. 395, which asks the NTC to reconsider its cease and desist order against the network, only 'expresses' the sense of the Senate. It does not have the effect of a law. 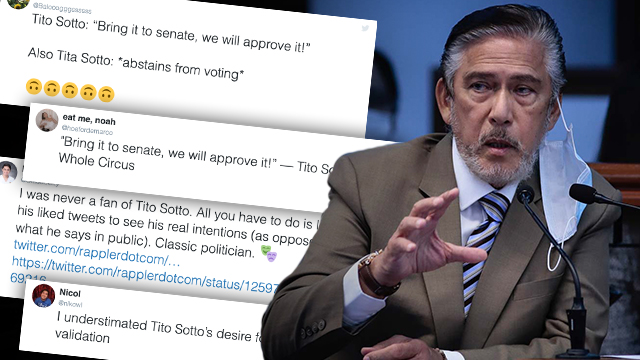 MANILA, Philippines – Some social media users blasted Senate President Vicente “Tito” Sotto III on Monday, May 11, for abstaining from voting on Senate Resolution No. 395, which asks the National Telecommunications Commission (NTC) to reconsider its cease and desist order against media giant ABS-CBN.

Netizens recalled that, on the night of ABS-CBN’s shutdown, Sotto had tweeted that senators would “approve” the ABS-CBN franchise once brought to the Senate.

ABS Franchise, bring it to the Senate, we will approve it!

On Monday, Sotto was among the 9 senators who abstained from voting on Senate Resolution No. 395, arguing that the ball was now in the hands of the House of Representatives as well as the Supreme Court (SC).

During the Senate session, Senator Panfilo Lacson asked whether passing the resolution would “influence” the SC as ABS-CBN already sought a temporary restraining order against the NTC order.

“It’s exactly the same point being raised by ABS-CBN [before the Supreme Court], the cease and desist order. That’s my main point,” Lacson said.

But the Senate President said he subscribed to the stance of retired SC senior associate justice Antonio Carpio that a law is needed to grant ABS-CBN a new franchise.

“But we are tackling a resolution that is countering the prerogative of the executive department. I am inclined to have the same thinking as [former] justice Antonio Carpio,” Sotto said.

Still, many took to social media to express dismay over Sotto’s vote, with “Tito Sotto” eventually landing a spot on Twitter’s trending topics within a few hours.

Here’s how they reacted to Sotto’s vote:

Aside from Sotto, Senator Pia Cayetano – who initially signed the resolution – also abstained and said she would like to “refrain from making comments” while the complaint is already pending with the SC.

On Monday, more than half of the senators passed Senate Resolution No. 395, which questions NTC’s shutdown order against ABS-CBN, citing precedence and the quasi-judicial body’s “liberality” in issuing franchise extension.

The resolution also reiterates the Senate’s stand that ABS-CBN should be allowed to continue operations while its franchise is pending.

Under the Constitution, franchise bills should come from the House of Representatives. Only after the lower chamber passes a franchise bill can the Senate tackle its version on the plenary.

In the case of Senate Resolution No. 395, it is only a simple resolution that “expresses” the sense of the Senate. It does not have the effect of a law. – with a report from Aika Rey/Rappler.com