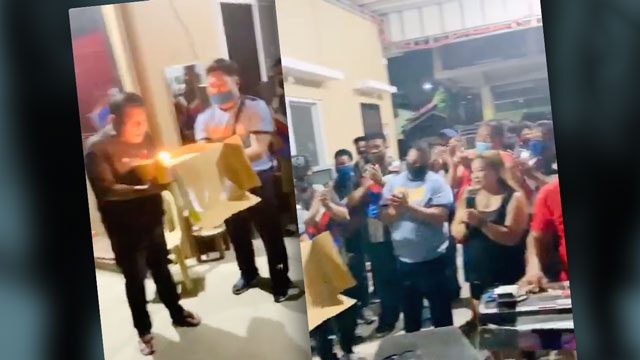 MANILA, Philippines (UPDATED) – Despite the ban on mass gatherings, the requirement for physical distancing, and overnight curfew as Pangasinan was under enhanced community quarantine (ECQ), some local government officials were caught on camera celebrating the birthday of Santo Tomas Mayor Timoteo “Dick” Villar III with several guests on Wednesday, May 6.

We have taken screenshots of the post and downloaded the videos in case these are set to private or taken down eventually. In the first clip, the Santo Tomas mayor is filmed shaking hands with his visitors. No physical distancing is in place as he warmly thanks the attendees one by one.

Mayor Villar: No celebration, no violations

In a Radyo Aksyon interview Thursday morning, May 14, Mayor Villar said the gathering at his house was not celebration or party. The local officials as well as those manning checkpoints came to greet him and left immediately, he said.

(Social distancing was observed. The photo might have made it look otherwise, but no feast happened. There was no celebration. They only came to greet me and expressions of gratitude.)

The mayor also refuted the alleged curfew violation, saying the well-wishers came late in the evening precisely because they had just finished their checkpoint duties.

(It just happened that all the barangay captains manned the checkpoints. There were no civilians present, no unauthorized person.)

Villar cast doubts on the veracity of the photos circulating on social media, although these obviously came from the videos uploaded by his councilor son.

“Palagay ko may mga pagbabago dun sa pictures eh. May mga pinalitan sila…. Siguro pinagdikit-dikit nila…. Kaya ‘yung social media, hindi naman perpekto,” he said. (I think there were changes in the pictures. They manipulated them so people would look like they were close to each other…. That’s why social media is never perfect.)

The case of NCRPO chief

On Friday, May 8, the National Capital Region Police Office (NCRPO) was under fire for holding a mañanita or early morning birthday serenade for their chief, Major General Debold Sinas amid ECQ. Days after the photo album went viral on Facebook, Philippine National Police (PNP) chief General Archie Gamboa has ordered an internal probe.

Sinas insisted there were no violations of quarantine rules, despite the photos showing a big gathering, the lack of physical distancing, and the consumption of liquor.

On Wednesday, Interior and Local Government Secretary Eduardo Año said government officials must set the example, especially during the coronavirus crisis. “This is what we call delicadeza (sense of propriety),” he said.

Epidemiologists and health officials have reiterated the need to practice self-quarantine and maintain physical distancing to contain the spread of the coronavirus.

Prior to the announcement made by Malacañang on Tuesday, May 12, to relax the lockdown in Region I from May 16 onwards, Pangasinan was among the provinces under ECQ from May 1 to 15.

@aloisinika
Alois Isinika is a digital communications specialist at Rappler. As a Sociology graduate, he thinks and talks a lot about the world we live in, that's why he frequently writes for Rappler Blogs or tweets his sentiments at @aloisinika.