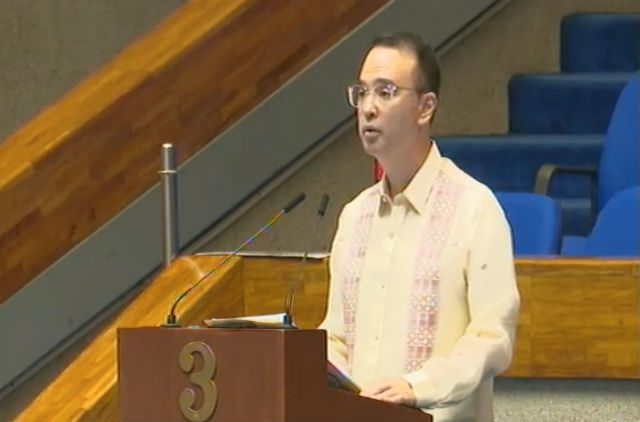 Facebook Twitter Copy URL
Copied
(3rd UPDATE) After sitting on the issue for months, Speaker Alan Peter Cayetano and 7 other House leaders file a bill seeking to give a provisional legislative franchise to the embattled ABS-CBN

MANILA, Philippines (3rd UPDATE) – After taking the heat for the closure of ABS-CBN, the House of Representatives is now pushing to grant the network a provisional franchise valid until October 31, 2020.

No less than Speaker Alan Peter Cayetano led a group of 8 House leaders in filing House Bill (HB) No. 6732 on Wednesday, May 13, the same day the plenary convened itself into a committee of the whole and approved the measure.

HB 6732 was then sponsored for 2nd reading approval in the plenary by co-author and Deputy Speaker Luis Raymund Villafuerte. It was approved by the House through viva voce voting or a vote of ayes and nays.

This means the bill only needs to go through a 3rd and final reading before successfully hurdling the House. It also needs to go through another 3 readings in the Senate before it can be signed by President Rodrigo Duterte, who had long threatened that ABS-CBN’s franchise would not be renewed.

By giving a temporary franchise to ABS-CBN, the House is essentially buying more time to deliberate on the alleged violations against the network.

During the plenary debates for the bill, Villafuerte said the House leadership believes the lower chamber would be able to properly deliberate on all sides of the ABS-CBN franchise within 5 months.

“I think it’s just the right time by October, which is roughly over 5 months. That is based on consultations made by our leadership…because this isn’t the only issue we’re going to discuss starting today until October. This is based on estimates that, by then, we would be able to decide [on the ABS-CBN franchise],” Villafuerte said.

In his lengthy sponsorship speech, Cayetano defended the lower chamber for dragging its feet on the bills that would have renewed the ABS-CBN franchise, which expired on May 4.

The Speaker argued that the House was simply too busy with the passage of administration priority bills, from the 2020 national budget to the Bayanihan to Heal as One Act that gave President Rodrigo Duterte special powers to respond to the coronavirus pandemic.

But Cayetano said the House decided to once again tackle the ABS-CBN franchise on Wednesday after the National Telecommunications Commission (NTC) refused to grant the network a provisional authority to operate and instead ordered it to close down on May 5.

“Nothing should be more important than defeating COVID-19. You cannot hope to weigh the value of our immediate response to the pandemic as against the concerns of a private corporation, no matter how powerful or how important that corporation is. There is simply no comparison,” the Speaker said.

“Yet this is exactly what the NTC has unnecessarily forced us to do by turning back on its commitment given under oath last March 10 that ABS-CBN will be allowed to continue to broadcast,” he added.

As in the past days, the Speaker also used his speech to once again blame the NTC and Solicitor General Jose Calida for the shutdown of ABS-CBN. (READ: Cayetano: ‘There will be a reckoning’ for Calida, NTC)

The NTC issued the cease and desist order against ABS-CBN after Calida warned against an issuance of a provisional authority that would have allowed the network to keep operating while its franchise bills were still pending in Congress.

“This distraction is the reason why we must not allow the betrayal of the NTC and the unconstitutional meddling of the Solicitor General in this exclusive power of Congress to go unchallenged,” Cayetano said.

The complete list of authors of HB 6732 are as follows:

The Speaker – who had accused the media giant of unfair election coverage – said it was wrong for the government to order ABS-CBN’s closure while the country is in the middle of the COVID-19 pandemic.

“So frankly, today is really not the time for ABS-CBN. Ngunit, dahil naaalala ko ‘yong laging sinasabi ng tatay ko aking ama o ng tatay ko na si (But I remember the words of my father) Rene ‘Compañero’ Cayetano. He always reminded us that it is always the right time to do what is right. Then we will find the time today to do what is right,” Cayetano said.

The Speaker wrapped up his speech by saying the House will be resuming the ABS-CBN franchise hearings soon, with the goal of properly deliberating on the alleged violations of the network.

“We cannot, in good conscience, sweep the accusations under the rug and proceed as if nothing happened. As we have always promised, these hearings will be fair, impartial, and above all, thorough,” he said.

The Speaker previously said the resumption of the ABS-CBN hearings “does not mean automatic renewal” of its franchise. – Rappler.com