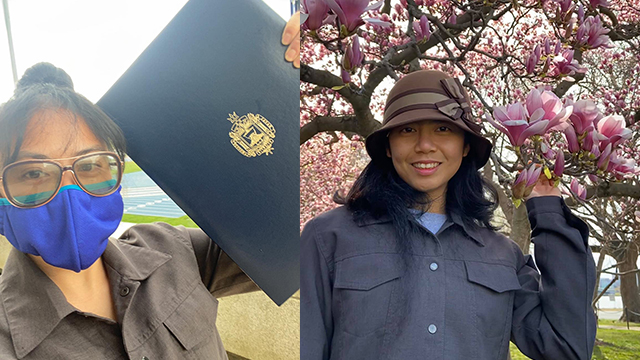 BAGUIO CITY, Philippines – At the graduation of the Philippine Military Academy (PMA) Class of 2020 on May 22, parents, relatives, and well-wishers won’t be allowed at Fort del Pilar as a precautionary measures against COVID-19.

Midway around the world, one of the more talented mistahs or classmates of last year’s class will also be graduating – with honors – on May 22 in a virtual ceremony.

United States Naval Academy Midshipman First Class Mary Pauline Fornea, an original member of PMA Class 2019, received her diploma last May 9 at the USNA in Maryland, but the event will be streamed on May 22.

“I dreamt of getting my diploma without any uniform or toga kasi parang baduy (because I thought it was tacky). Dreams do come true,” said Fornea, known as Pawie among her friends.

“I just got my diploma with my ukay-ukay polo jacket for my two engineering bachelor’s degrees with merit (graduation honors),” she added.

The USNA, like other military academies in the US, decided to hold its “graduation” in 5 batches with 210 midshipmen each over a 10-day period starting last week. These were filmed and will be streamed on May 22.

Fornea graduated with merits with a degree of Bachelor of Science, double majors in Weapons, Robotics and Control Engineering, and Naval Architecture and Marine Engineering.

Fornea even had time to clinch a bronze medal in the duathlon mixed relay in Subic Bay during the 30th Southeast Asian Games in December 2019. (She teamed up with Monica Torres, Doy Commendador, and Efraim Iñigo in getting the bronze.)

Fornea is from Davao City and was taking BS in Food Technology at the University of the Philippines Mindanao as a Department of Science and Technology Scholar when she entered the PMA.

She was constantly on the dean’s list and commandant’s list at PMA before she qualified to join the USNA in 2017.

“I said to my tac-o (tactical officer) before leaving USNA: I started my life here with the highest ideals my Academy taught me. I live with double standards: US military and PH military, and that is the hardest part of my cadet life,” she said in a Facebook post.

“Now, I want to end my cadetship here at the USNA on a very good note. I’m not representing myself, I’m representing the Philippine military,” she added.

In the USNA, she was also constantly on the dean’s list, which earned her a “with merits” badge for earning a minimum of 75% of the total possible points used in determining the Overall Order of Merit.

She was also cited as a rifle expert and pistol sharpshooter by the USNA. – Rappler.com