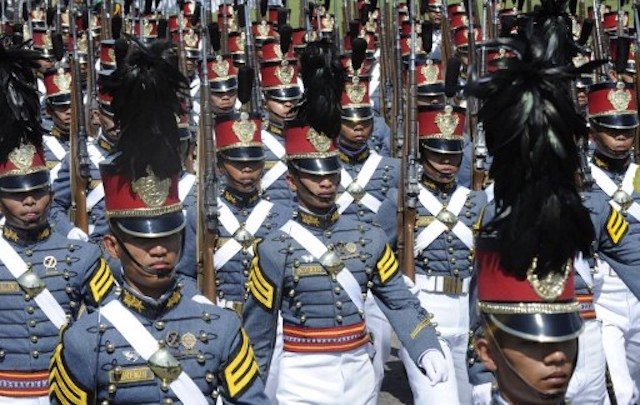 Facebook Twitter Copy URL
Copied
The class goat, the least-rated cadet from either academy, gets a gun from the Commander-in-Chief

MANILA, Philippines – For the third straight year, President Rodrigo Duterte rewarded the valedictorians of the country’s top military and police academies with a house and lot, and the last-ranking “class goat” with a gun.

The Commander-in-Chief on Friday evening, May 22, delivered a video message to the graduating classes of the Philippine Military Academy (PMA) and the Philippine National Police Academy (PNPA), whose commencement ceremonies were done in private as their campuses remained on lockdown because of the coronavirus pandemic.

“Let me add a flavor,” he said after declaring the cadets’ pardon.

“Maybe you’d do more for the country. This is just a challenge,” he went on, and then read out the prize he was giving the topnotchers of both academies.

“The certificate of ownership of house and lot for the class valedictorian, a house and lot [worth] P2 million from the Vista Land company of Manny Villar,” Duterte said.

(That boyfriend beside you, signal to them that they can’t enter the house drunk, rowdy, or womanizing. Tell them, “This is mine, and don’t go looking for trouble.”)

This is the third year in a row that Duterte rewarded the class valedictorian with a house and lot from Villar’s real estate company.

Former senator Manny Villar is currently the richest Filipino according to Forbes magazine. He ran for president in 2010 but lost to Benigno “Noynoy” Aquino III.

The billionaire’s wife is Senator Cynthia Villar, and Public Works Secretary Mark Villar is their son.

Although he no longer holds public office, Manny Villar is the president of the Nacionalista Party.

Duterte first rewarded the PMA and PNPA valedictorians with a house and lot in 2018. He is the only president in recent memory to do so.

A gun for the goat

Duterte in 2018 also started giving the academies’ “class goat,” or the lowest-rated graduating cadet, a gun.

This year, the class goats are receiving a caliber 45 pistol from Rock Island Armory, a US brand that manufactures firearms in the Philippines.

The class goat of military and police academies are treated as a symbol of perseverance – for having made the cut despite difficulties they obviously faced in keeping up with their classmates.

Having saluted the graduates at the end of his speech, Duterte added, “Goat, I salute you also.”

‘My soldiers, my policemen’

PMA graduates begin their careers as 2nd lieutenants and ensigns in the Armed Forces of the Philippines’ 3 branches of service: the Army, Navy, and Air Force.

PNPA graduates are headed for the Philippine National Police, the Bureau of Jail Management and Penology, and the Bureau of Fire Protection.

Duterte, who has lavished the military and police with raises and praises since the start of his term, told the graduates, “My soldiers, my policemen, the soldiers of the republic and the policemen of this government, mabuhay kayong lahat, at sinasabi ko, saludo ako sa inyo (may you all live long, and I tell you, I salute all of you).”

After reading out the cadets’ pardon, he added, “Lahat ng tao may kalokohan (Everyone has their faults), but if you are now a policeman or a soldier, kindly hold the honor bestowed by the country upon you sacred in the hollow of your hands.” – Rappler.com