May 28, 2020 12:43 PM PHT
Agence France-Presse
Facebook Twitter Copy URL
Copied
The country of 210 million people now has a nationwide death toll to 25,598, the sixth-highest in the world 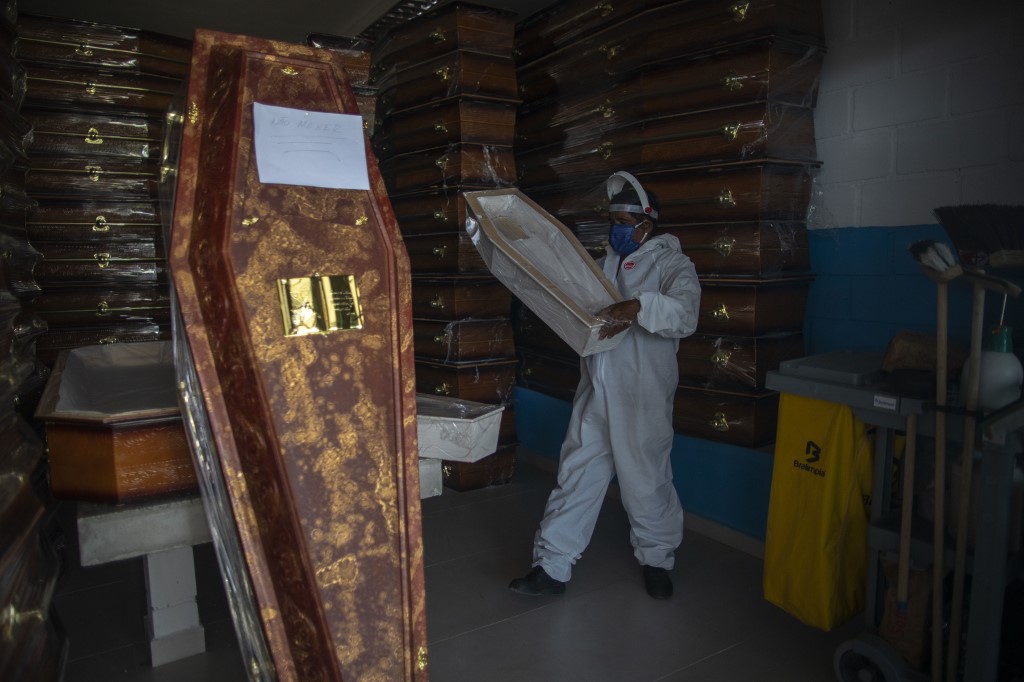 RIO DE JANEIRO, Brazil – Brazil’s death toll from the new coronavirus surpassed 25,000 on Wednesday, May 27, as the country emerged as the latest epicenter in the global pandemic.

The health ministry said it had confirmed 1,086 new deaths in the past 24 hours.

It was the fifth time the number exceeded 1,000 since the crisis accelerated in Brazil a week ago.

That pushed the nationwide death toll to 25,598, the sixth-highest in the world.

The country of 210 million people now has 411,821 confirmed cases of the virus, second only to the United States.

President Jair Bolsonaro is facing mounting criticism over his response to the health crisis.

The far-right leader has downplayed the seriousness of the virus and railed against stay-at-home measures, arguing the economic fallout risks causing more damage than the virus itself.

“The so-called second wave is coming: recession. It will affect everyone, without exception,” he wrote on Facebook.

But most state governments have stuck to the World Health Organization’s guidance and closed non-essential businesses.

Sao Paulo, the country’s industrial hub and hardest-hit state, extended its stay-at-home Wednesday until June 15, though Governor Joao Doria announced a gradual reopening of “some activities” would be allowed from June 1.

Bolsonaro has meanwhile pinned his hopes on the medication hydroxychloroquine, which – like US President Donald Trump – he has touted as a potential wonder drug against COVID-19.

Brazil’s health ministry recommends doctors in the public health system prescribe hydroxychloroquine or a related drug, chloroquine, from the onset of COVID-19 symptoms.

It said Monday it stood by that guideline, despite the WHO ending clinical trials of hydroxychloroquine over concerns about its safety and effectiveness against the coronavirus.

Brazil is facing the crisis with an interim health minister, army general Eduardo Pazuello – the third person to hold the post in a month.

His predecessor quit, reportedly because he disagreed with Bolsonaro on hydroxychloroquine. And the president fired the previous health minister, also after clashing over how to respond to the pandemic.

Meanwhile, hospitals are dangerously close to the breaking point in the hardest-hit areas, and the outbreak is not expected to peak in Brazil until next month.

“We are particularly concerned that the number of new cases reported last week in Brazil was the highest for a seven-day period since the outbreak began,” Carissa Etienne, director of the Washington-based Pan American Health Organization, said Tuesday.

One of the country’s best-known doctors, the neuroscientist Miguel Nicolelis, called it “the worst war Brazil has ever faced.”

“We never had an event like this. We never lost 25,000 people in a span of 3 months,” Nicolelis, who is coordinating the virus response in the impoverished and hard-hit northeast, told AFP.

“We never got invaded in our history, but I’m referring to this virus as an invasion. It came like an invading army, and it’s invading the whole of the country.” – Rappler.com