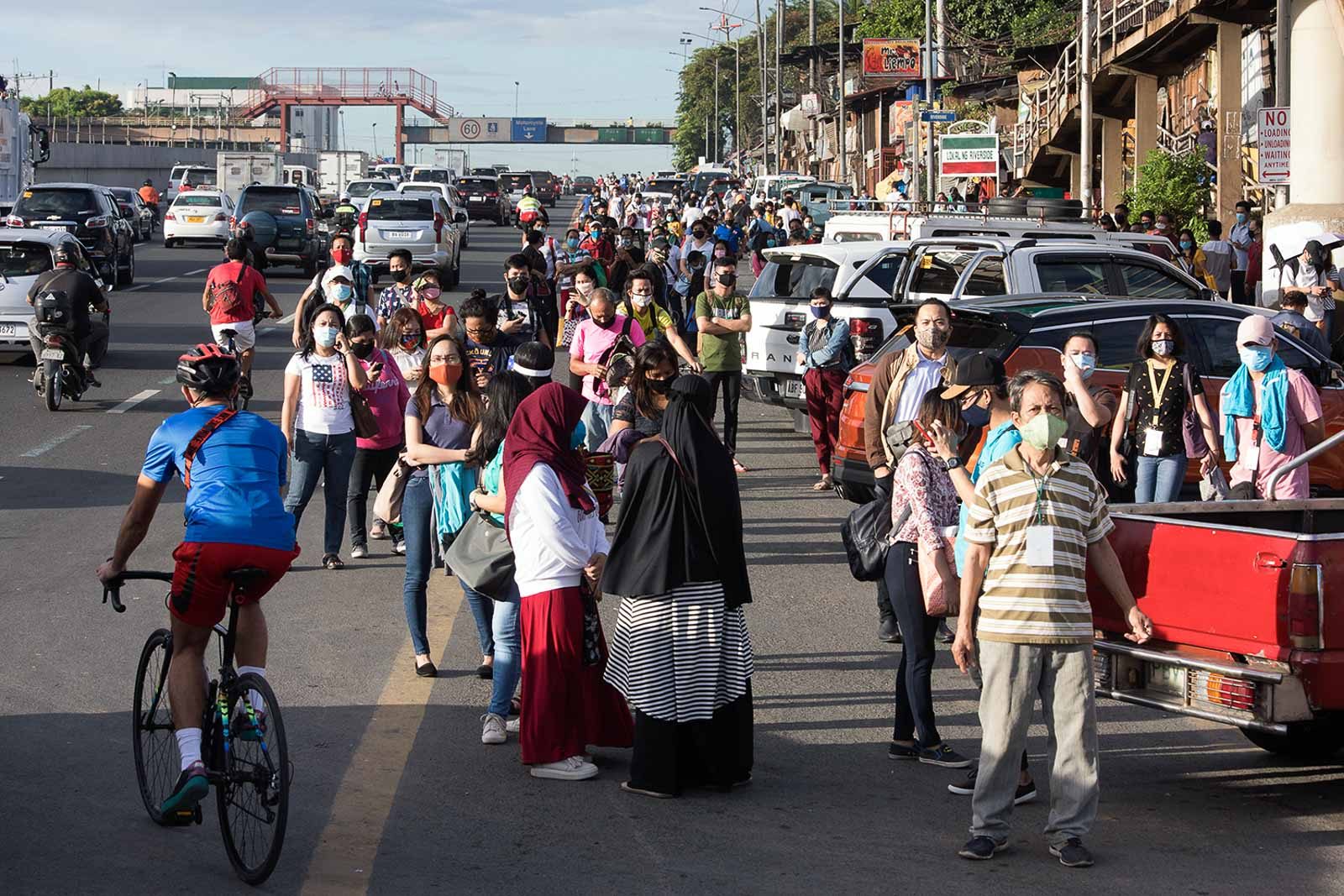 MANILA, Philippines – The commute was already bad pre-lockdown in early March. It became worse when Metro Manila shifted to the much more relaxed general community quarantine (GCQ) on Monday, June 1.

Several people were stranded along Metro Manila roads on Monday, as the capital region reopened without sufficient options for mass transportation.

Majority of industries were allowed to go back to work under GCQ. However, while most commuters relied on public transportation, the government allowed the limited operation only of train systems, bus augmentation, taxis, transport network vehicle services, shuttle services, and point-to-point buses.

The lack of public utility vehicles (PUVs) and the limited passenger capacity of the modes allowed to operated pushed people to walk or wait for the emergency vehicle augmentation from the national government.

(The social injustice during GCQ is excessive! I’ve been waiting for more than two hours just to get a ride up to MRT North Avenue, but I can’t get one. Others here have been waiting longer. This is unfair and unhealthy. What justice? More likely, it’s anti-poor.)

In a desperate move to get a ride, commuters along Commonwealth Avenue in Quezon City were seen crowding inside military trucks and police vehicles hastily dispatched by the national government, and violating physical distancing requirements.

(What happened to the so-called physical distancing that the government wanted to implement? The government placed commuters in a riskier situation where they might get infected.)

While Transportation Secretary Arthur Tugade asked for the public’s understanding, he also said the department “never promised” that sufficient PUVs would be back come GCQ.

“Wala kaming ‘pinangako o sinabi na ang transportasyon ay magiging (We never promised or said that transportation will be) extensive and will meet the requirements of all on the first day of GCQ, and even in the duration of the GCQ for that matter,” Tugade said in a CNN Philippines’ The Source interview.

“Because, as I’ve said, our approach is partial, limited, calculated, and gradual,” the transport chief added. (READ: Will public transportation be enough once Metro Manila is placed under GCQ?) The Land Transportation Franchising and Regulatory Board allowed two city bus routes to open starting June 2 to serve Bulacan and Cavite commuters. These two routes will be:

Bikers continued to cycle along EDSA too, even as Metropolitan Manila Development Authority General Manager Jojo Garcia warned against it. Days ahead of GCQ, Garcia said that biking was prohibited along EDSA pending the construction of a bike lane. (READ: On their own: Commuters and the looming transportation crisis in Metro Manila)

Meanwhile, bike advocates set up pop-up lanes along Commonwealth to protect new and old bikers who would pass through the highway. The volunteers also assisted bikers who encountered problems along the way.

As the Department of Transportation (DOTr) pushed for PUV modernization, jeepney drivers staged protests in different parts of the metro, asking the government to allow them back on the road.

A driver at the Commonwealth protest held placards asking for help, saying that he did not receive cash aid for drivers from the national government. 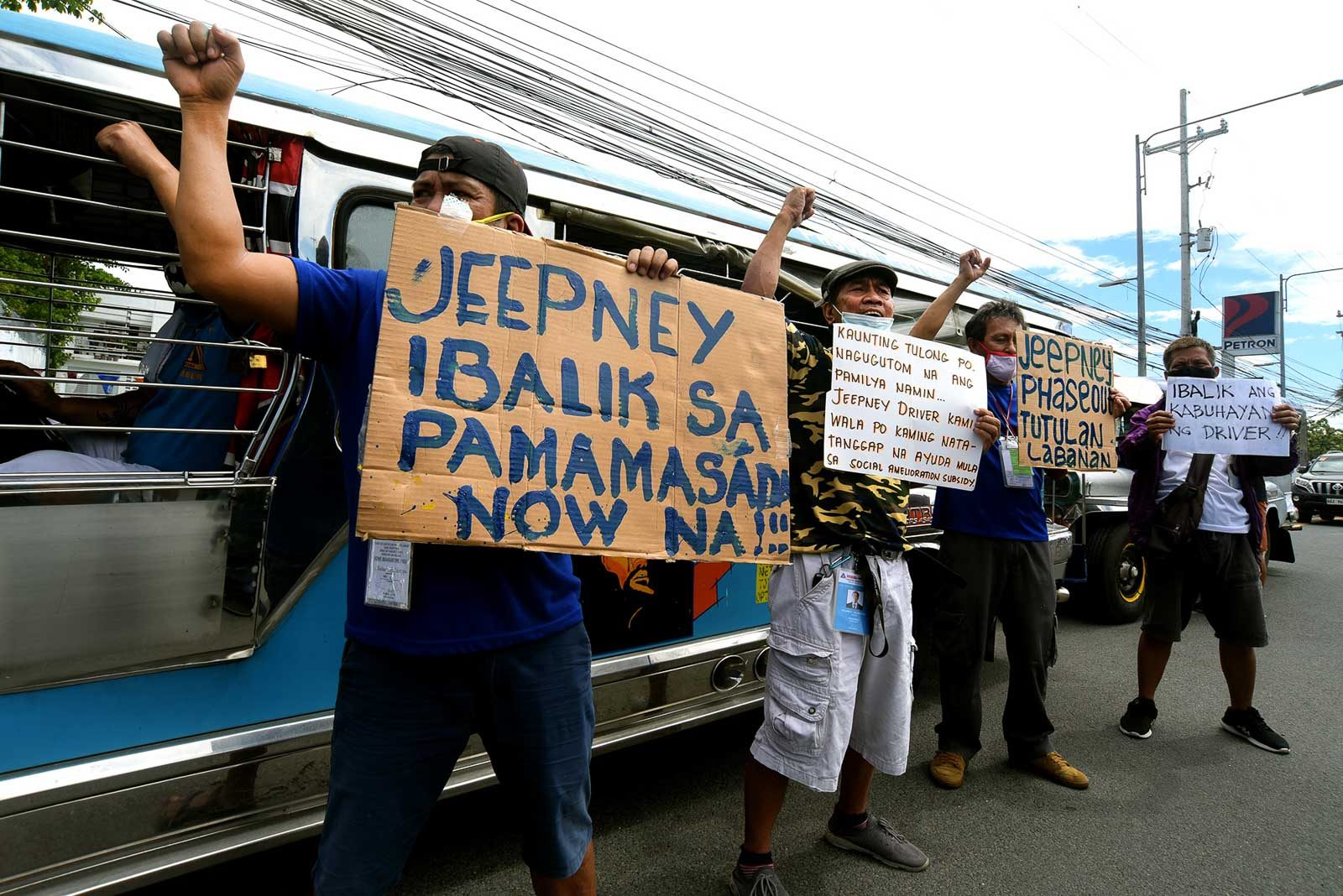 What about traditional jeepneys? Tugade said jeepneys would be allowed, subject to conditions such as road worthiness and the ability to implement health protocols.

Transport groups accused DOTr of discrimination against traditional jeepneys as the government pushed for PUV modernization.

See what the online universe had to say about the transportation crisis that Metro Manila faces: